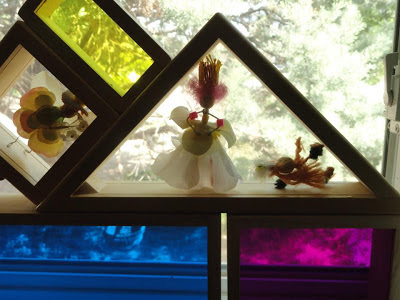 Holly put that photo up on the facebook page she created for Just Add Light and Stir.

The blocks come apart by removing a couple of screws. They're plexiglass in wooden frames, and came from Discount School Supply.
Refillable Window Blocks 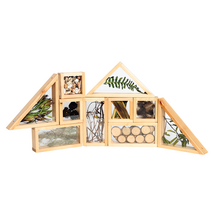 And at the bottom of the top photo some of these show—they have one open side so they can be nested.
Nest & Stack with Color Blocks - Set of 6

I got them when they were on sale. I like that company. They deliver quickly and are honest and generous. I get paper there to wrap books in to sell, and have gotten gifts sometimes, and the tunnel kids play in at the Always Learning Live gatherings in Albuquerque.

Links are there for the schedules for the unschooling gatherings in Lisbon and Leiden, and Julie Daniel's conference in Ashford, Surrey (west of London).

Joyce Fetteroll is travelling with me in 2013. We'll visit Ester Siroky's family in the Yarrow Valley, in Scotland. I'm looking forward to that.

Later in the year, Joyce and I will visit Schuyler Waynforth and her family near Brisbane, Australia, and there are plans for visits to a few other places, to meet unschoolers and see the exotic Australian springtime!! In October. Details of that will also be at the blog linked above.

Schedules will be there, but photos will be here, when the time comes.

I'm not planning to travel this way next year, and I'm feeling old, so this might be the last big unschooling "tour." I kind of hope so. The families I'm meeting have been sweet and wonderful, but my kids are grown and I'm feeling old. Holly and I hope to visit India in a year or two, but to shop and hang out.

Posted by Sandra Dodd at 4:57 AM No comments:

Octopus in a bucket

The notes are from Facebook writings at the time:

Holly and I were in the water, out a way, and found two big shells. I carried them back and put them in our bucket. My shoes were in there, too. Girly Crocs, toes down. All dry.

We came out of the water and there was a little octopus sticking his legs over the edge of my shoe. He had glommed himself on where my heel would have gone.

We went and got water in the bucket and pried him off gently with a shell and a feather.

We brought him up to show people, and will take him back later. He was out of water for at least half an hour, probably more, but he's alive. I figure we can let people look at him today, and take him back out after 6:00. He looks better now than he did when we first brought him up here.

We had a conch shell, too, about three inches long. It seemed to have a crab in it, when we saw the octopus, so we let that back into the water. Two dark things were sticking out, so I figured someone else needed it more than I did. We didn't have the camera with us at the beach. Later, in the conference, room, though...

Kids kept coming to look, and at one point I moved the shell so a group of girls could see him. He had had enough, he inked, and jumped to the edge, and started down onto the carpet.

Click on any of the thumbnails to see a bigger image. Here's the rest of that facebook conversation from October 16. I don't trust facebook to keep it for me.

Laura Flynn Endres: that is so cool! I hope you post some photos.

Deb Lewis: Have you held him? They feel amazing! What a great story, an octopus borrowed your shoes!

Sandra Dodd: We didn't have a camera down at the beach, but I've added photos of him in the bucket. I did hold him, when we thought he wouldn't live. When I took photos of him, he was stronger, and holding on to the bottom of the bucket, so I wouldn't be able to pick him up easily now.

Jill Parmer: I like the part "pried him off gently with a shell and a feather" Very cool and lucky you got to hold an octopus.

Kristen Kramer: They can fit through the tiniest of spaces. The one at Adventure Aquarium in Camden, NJ, has a tendency to try to escape his tank, and go for a walk when he does. Such fascinating creatures.

BetteAnne Camagna: my little girls and i found a baby octopus washed up on St. Pete Beach 3 years ago! We loved it! It was so cute! We lovingly examined it and then brought it back to the sea live and get bigger! They must be relatively common in The Gulf of Mexico.

Sandra Dodd: Holly and I figured it might be a common occurrence, too, so we asked locals and they said they'd never seen on outside an aquarium. It was pretty exciting, and I wish we could've kept him the whole day, but the people who said "take him back" were right.

BetteAnne Camagna: oh wow! Then we were both Blessed to of witnessed a live Octopus! St. Pete's is just a little south of Treasure Island. We have a stay there in Treasure Island this winter. Can't wait! :o) The one we held was about 4-5 Inches long. A beautiful creature. We will never forget that. My girls wanted to keep it, but I said it wouldn't live very long if we did. ~ it was just really a cool experience...... they still talk about! have fun in Florida!! My favorite place on earth!

Sandra Dodd: I got to touch it. I saw the ink. It was stunning. I took him back a few hours earlier than I planned to because he got cranky, inked the bucket, and climbed out onto the carpet. He was ready to go home.

Jennifer Hills Weed: That is so awesome. I remember reading how intelligent they are.

Rodema Ashby: One climbed out of its tank at an aquarium, fished out the shrimp exhibit, then went back to its tank: how the shrimp were going missing was a mystery for sometime before a camera caught the culprit in the act. I love the lightshow/camouflage stuff...thanks for sharing your adventures;-)

There were more notes on the facebook group for the conference. And I had a link to the notes above, with this.

An octopus was in our bucket after we collected shells. He was in my shoe (but I didn't put it on; I saw him). We put water in the bucket and have brought him back for show & tell. I'll have him in Ballroom B, in case anyone wants to see him today. Then we'll take him back after 6:00.

Shelley Harris Hawkinson: Can't wait either! We'll be there after 1pm. Hope hell still be there!!

Sandra Dodd: I was persuaded to take the octopus back early. I'm sorry, for those who didn't get to see him. I irritated him, opening the shell a bit so some kids could see him. He hid under it again. I picked it up, and he made a rising, rising swim motion, coming up in the water. Then he INKED, and left a bunch of purple in the bucket, and then he jumped to the side, climbed to the edge, and down onto the carpet.

Knowing he was that cranky, and that he could get out, it seemed best to take him back.

I walked out waist-deep with the bucket, him, the shell, and lowered the bucket into the water and then when it was halfway to the bottom, tipped it gently and saw the shell go to the sand, pretty gently. I made sure he wasn't in the bucket, and came on back.

Sandra Dodd: There are photos of him getting out. Video would've been fun, but it would've included a bunch of us yelling about it. It was exciting, and I'm glad I got to see him, and I was sad to let him go.

There is my documentation. That was probably the most exciting thing that happened to me in 2013. Very, very memorable.
Posted by Sandra Dodd at 8:54 PM 2 comments:

A close-up would've been nice, but it was mounted high on a wall, at a farm store George Mahowald took me to when we were buying food for the ALL in May event in 2012, in Massachusetts.

I used the image on Just Add Light and Stir (here), but those are small, so I want to upload a larger version. It wasn't a long rake handle. The metal was wound around something, though, when it was hot, so that there is a loop for flexibility.

Posted by Sandra Dodd at 3:27 AM No comments:


Ashlee gave us a book for Christmas, called 100 Things You're Not Supposed to Know, by Russ Kick.  There was a passage about "hardcore sexual imagery as old as the human race."  I like the author's phrasing, and thought I would see if there was a cut-and-pastable quote I could use in the chat.  There wasn't.

I googled russ kick neanderthals boffing
and got:

Lady Gaga on sex, drugs and immigration – The Marquee Blog ...

marquee.blogs.cnn.com/.../lady-gaga-admits-to-using-cocaine-on-oc...
Aug 2, 2010 – With that shocking lack of talent or class you know she has to be boffingsomeone just to keep her career alive ...... Russ. Gaga is a no talent idiot. What a shame any young people would listen to ...... while I agree they are good workers they need to be here legally if not kick em out! ...... Neanderthals indeed.