A year! Let us eat cake! (or at least maybe read cake) 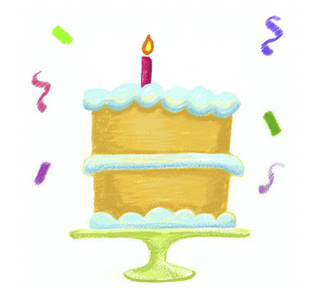 When I came to my computer this morning, a cold bowl of rice and a near-full Dr Pepper made me realize that when I left at 7:45 Tuesday night because Marty wanted me to look at a possible sticker or bug bite, I never came back in here. And I discovered when I went to make tea that I had never gone back up to the kitchen.

By the time the tea was done, it looked much better. I was thinking, as I cleaned up, of how quiet the house was. It was 7:55 and the sun was shining. Keith had left for work at 6:00, and Marty at 6:30. Holly was asleep and Kirby was... I panicked a little bit, because I thought he was supposed to be at work at 8:00, but I checked the handy-dandy kitchen calendar and today was a 9:00 day at the fine pizza establishment at which he is employed.

So it was still quiet, and I wasn't worried anymore. The stillness was nice.

Yesterday was busy and stressful for me and several around me. Kirby called me on his way to karate wanting advice on how to gracefully get out of his commitment there. I found out only later than his computer had been dead in the water when he left and he had been frustrated to the limit before he realized it was past time to leave to teach karate, and he was late. Keith had been with him for that part. I got the phone call elsewhere. But when he got home he felt better, having arranged for a karate-free May, and he found that his computer's video card was just loose from being carried back and forth from his friend's house. All was better. He had a frustration spike with a peaceful ending within just a couple of hours. I wish all such panics could be so easily diffused and defused as mine this morning and Kirby's yesterday afternoon.

There's a wish for all of you. May your panics dissolve into peaceful solutions.
Posted by Sandra Dodd at 8:59 AM 1 comment:

Ninja Turtles in the yard I should post more, but after I write at UnschoolingDiscussion and AlwaysLearning, all my writing energy is spent. This morning they're quiet, so I came here. Also I had this photo to deposit in public. I thought it would be easy to find with google image, but didn't find one. Maybe someone needing it in the future can find it now. It's here and also at Late Night Learning. I took it off the wall in Kirby's room, cleaned the dust off, and photographed it on top of the hot tub. He came home and noticed it missing and was worried. It's back on his turtle museum wall again.

Yesterday Keith and I played in the yard a lot. I would say "yardwork," but it was fun. Marty did the hard stuff—climbing up ladders to put plastic net so that moonflowers and morning glories can climb up in new places. Where the morning glories used to be, though, I'm putting in "real" vines—Virginia creeper (which was already here and is going north instead of south, and I'll try to redirect it) and honeysuckle. Our nextdoor neighbor wanted some of our Virginia creeper because it reminded him of his childhood, but his wife didn't want any. Keith and I put a few near his porch but I'm not sure if it lived. So I'm going to put it up the fence between our house and theirs so he can share it that way.

(For the benefit of anyone wanting to find that art, it's Ninja Turtles as Renaissance artists, and I hope google image can help them find it. Here's more help: TMNT plastic wallhanging Donatello Michelangelo Raphael Leonardo paintbrushes easel palette)

Kirby housesat at the dojo again earlier this month, while his sensei was out of town. His friends joke that it's part of his training to stay there alone and protect it from Ninjas. The first time he was going to do that, I was worried. It's a bad neighborhood, and he would be there all alone. Keith, who wasn't worried, reminded me it was basically a fortress full of weapons and Kirby knows how to use most of them. Not the least powerful is the phone, too.
Posted by Sandra Dodd at 6:24 AM No comments:

Mountains out the window That's the view out our library window. Some people swear by an aquarium for a slowly-moving, soothing thing to see, but I like the clouds and shadows on the mountains out that window.
Posted by Sandra Dodd at 1:11 PM 4 comments: