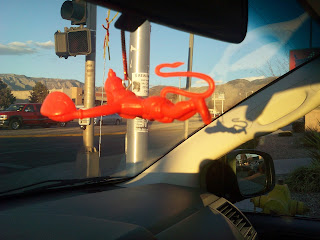 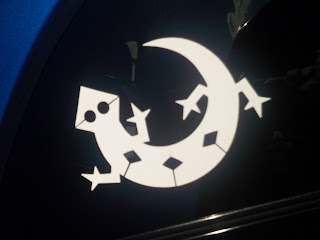 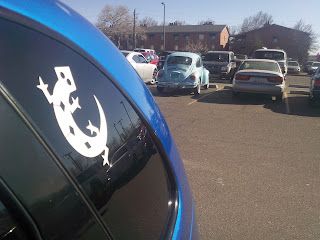 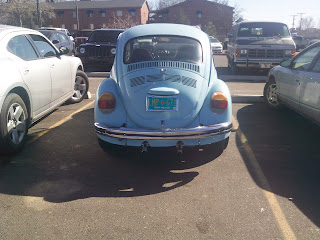 The new turquoise license plates here can clash with some car colors, but on this VW it was really beautiful.  And there was another beautiful blue car between me and there.  And it had a cool lizard.
Posted by Sandra Dodd at 10:34 PM No comments:

Portrait of my Thai food, with me in the background. 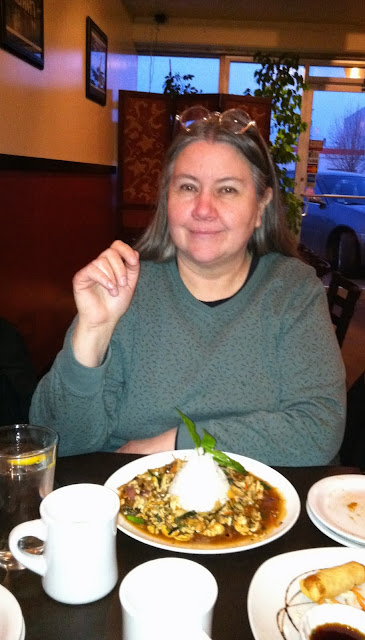 (photo by George Mahowald)
Posted by Sandra Dodd at 9:44 PM No comments:

Yesterday and Today in Redding CT 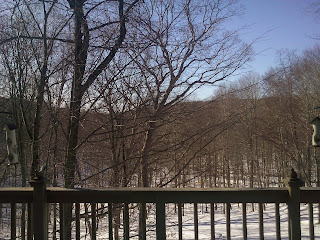 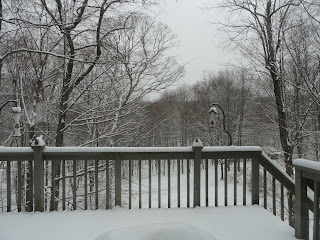 Posted by Sandra Dodd at 8:58 AM No comments:

I'm missing two or three people on the left, and three or four on the right. Sorry. 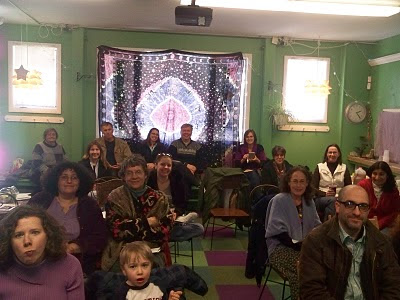 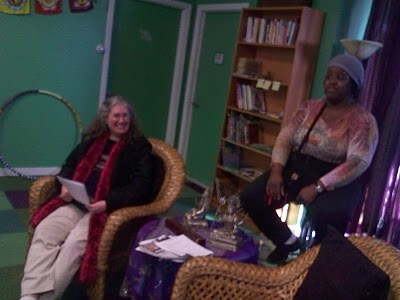 Winding down afterwards:
Mary Draper, George and Eileen Mahowald, Joyce, me and Erika 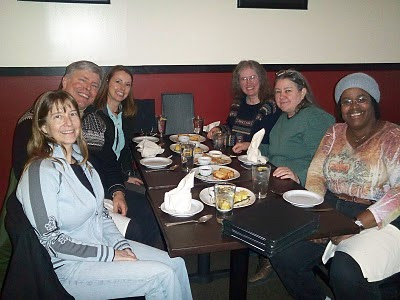 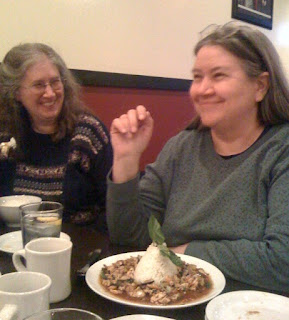 Posted by Sandra Dodd at 7:57 PM No comments:

"pretty good for an unschooler"?

Thinking and thinking, after ten days of meeting with and talking to other unschoolers, I have a couple of things to save for future use.

And the other is about "screen time"—a term I've heard too many times in the past week. I posted this on Always Learning:

I didn't make that response verbally, but the next time someone talks about not being pro-something, I hope I'll remember it.

The negativity added to the equation of a mom (especially) declaring that she is not for, or against, (something) is always (I think) negativity.

And here are some gratuitous photos, all from Philadelphia on the 16th. 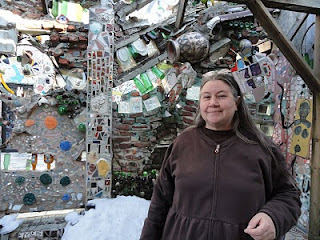 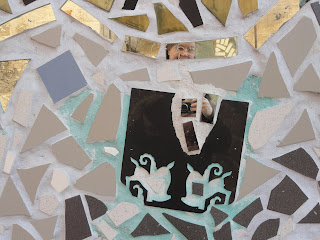 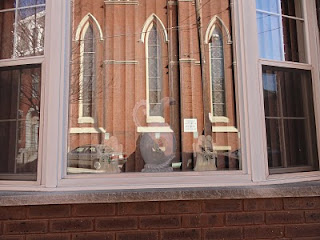 Posted by Sandra Dodd at 4:17 PM No comments:

a little confusion about "the light" 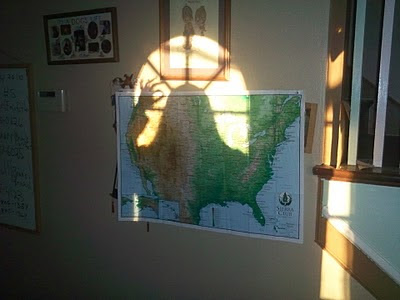 There's the photo I took with my phone, and immediately mailed it to Holly, who responded


When you said 'light change,' I thought you meant traffic light lol!!

Then a few days later I was walking around "south Philly" with a special secret-route map Amy Childs gave me, and saw this: 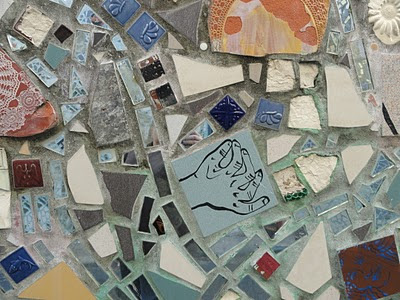 Yes, there may be sensible extenuating circumstances.  There's my disclaimer.

In the plane to Atlanta a baby was crying.  Bigger baby--one year old, maybe as old as two.   Screaming after a while, and the mom was saying shh, shh, shh, and trying to comfort her but the baby was louder and insistent, and it wasn't pain and it wasn't air sick.  It could have been boredom.  But it seemed a repeated attempt to appeal to the mom.

After a while I over heard her say to someone "She wants to nurse."  So I hoped the person she was talking to was advising her to just DO IT already.    But it got worse, and after a while she said louder "She wants me to nurse her."  So nurse her!  Oh, that was my voice.  Three rows up on the other side looking back, into the faces of people agreeing with me, nodding at me and saying, Right, why doesn't she just nurse her?  So others said too, "Nurse her," and "poor thing."  I said "Nurse her!  Nurse her!  Nurse her!" like a chearleader, and though others didn't take up the cheer, they were cheered by it.  I asked if she needed to borrow a blanket, but I don't know if she heard me.

After maybe ten more minutes of the same sad, repeated scream, the baby got quiet.  I didn't look back.  I wanted to imagine that the mom had given up and nursed her, rather than that the baby gave up asking.

I've nursed babies in airplanes.  Three of them.  It's the wonder of biology that a child can be nursed to sleep with happy hormones and the mom can feel content to sit for an hour or two or three.  And as moods are contagious, the peace of a sleeping baby can spread.

As moods are contagious, today that child's frustration, indignation and increasing confusion and fear spread.    I don't see any downside to nursing a baby.  Maybe she was trying to wean her.  Okay, not a good day for it.  Maybe she wasn't wearing clothes that made it easy to nurse.  Mom-problem, then.  Maybe she was on medications she couldn't nurse the baby with.  Then she should've had a bottle.

If anyone reads this who knows the mom and wants to explain or defend her, there's the comment field.  Go ahead.   I DID feel sorry for her, but I felt sorrier by far for the daughter.  And next, I felt sorry for the others in the plane who had no control over the situation at all, and were helpless.  At least the daughter was trying to help.  She was trying to reason with her mom.

I hope she's not on the connecting flight.   But more than that, I hope she found a place and let her daughter nurse herself into a peaceful stupor.  The problem is that some of the peace of their dyad is harmed now.  That much screaming isn't good for a baby even in the total absence of witnesses or passengers locked in the same very small cabin.

Be nice to your babies, please, everyone!   It really does add to the peace of the world. 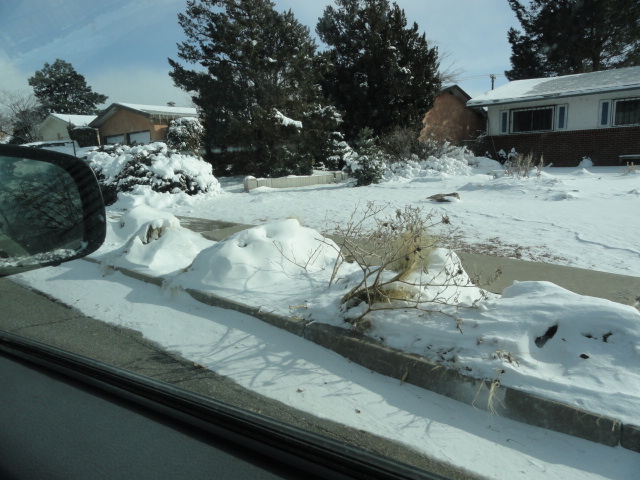 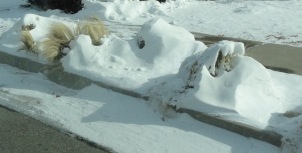 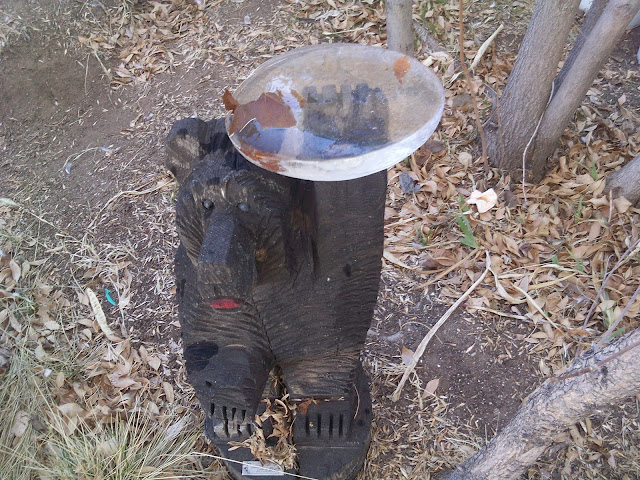 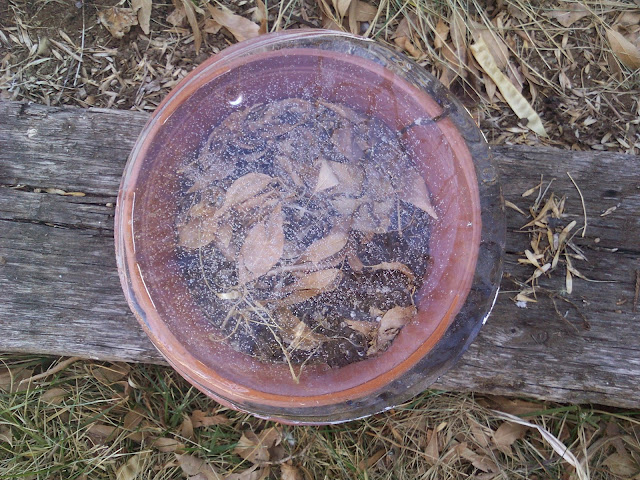 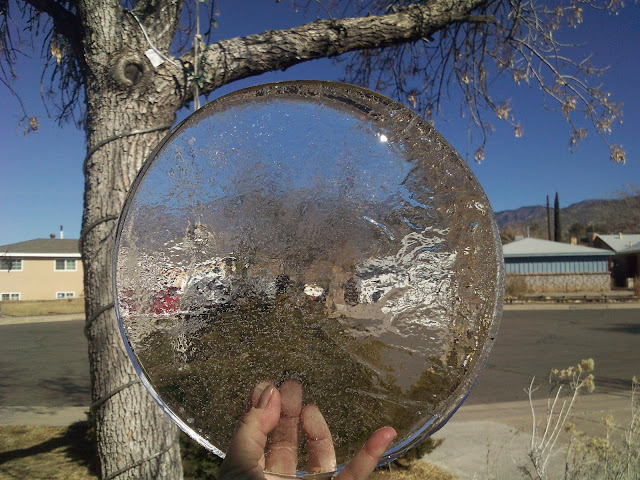 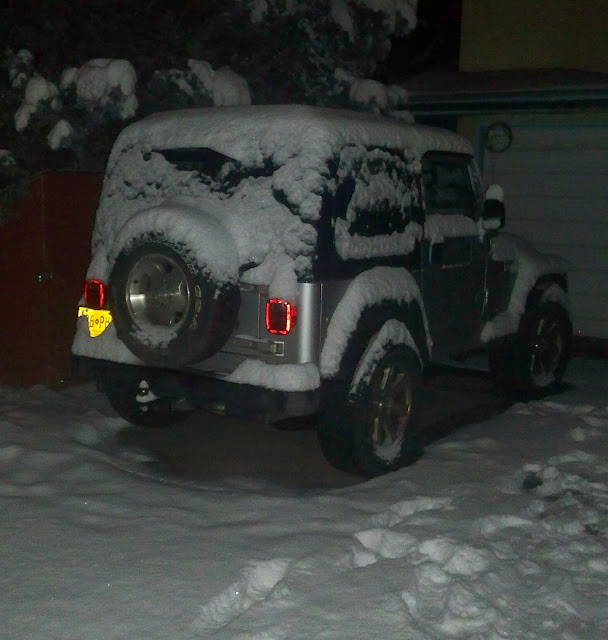 Posted by Sandra Dodd at 5:37 PM No comments:

This is nearly a week old, but this is a report on the hospital food they brought Keith when he was still mostly unconscious. I thought of friends in India, and England. 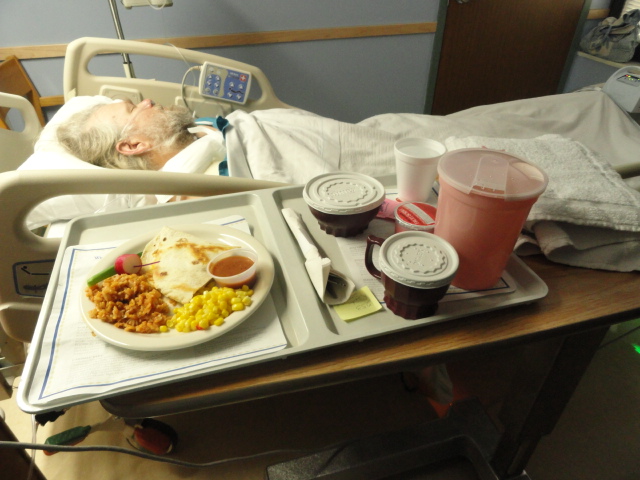 Chicken quesadilla (the tortilla had cheese and grilled chicken bits, and hot sauce to dip it in). Spanish rice (rice cooked in tomato juice, or some such). Corn. The two brown containers are cream of chicken soup and iced tea. The one in the front, in a coffee cup, was cold tea. The pink thing was strawberry sorbet.

That is a LOT of food. Creamy, spicy, irritating kind of food. Oh. And the radish and the onion: 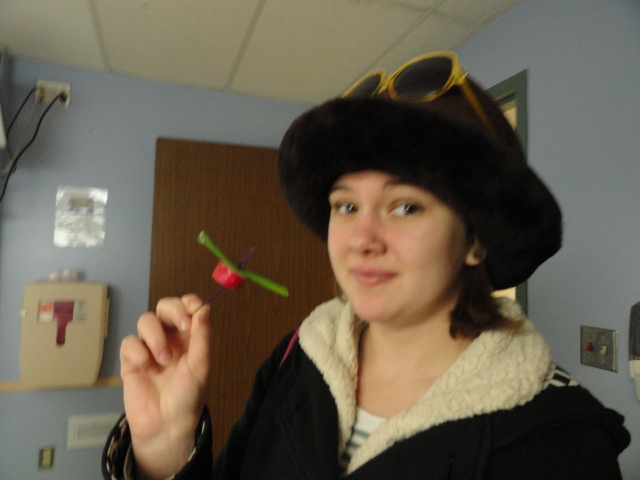 Maybe Day 3 it could've been good, but three hours after surgery!? Day 3 he was home, anyway. :-) 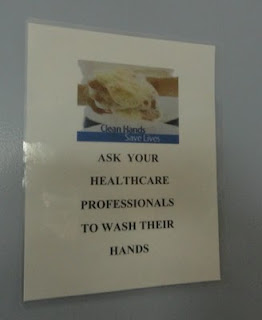 Holly objected to this sign. She figures if they don't know that, they're not really professionals.
Posted by Sandra Dodd at 5:14 PM 6 comments:

Not beautiful to sit on, but nobody was attempting to sit there.  Holly took these photos of the bus stop nearest our house yesterday: 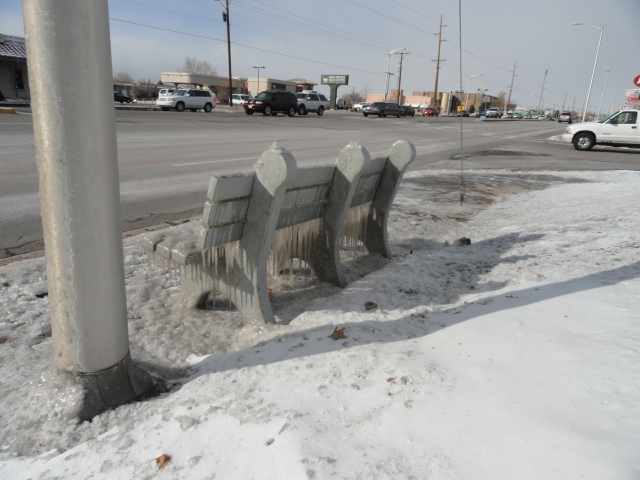 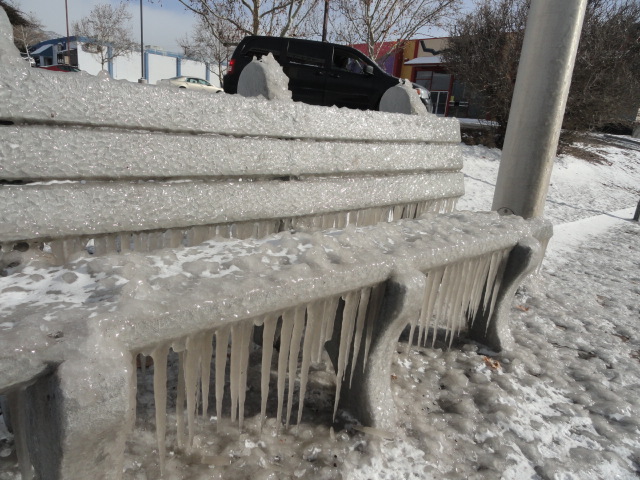 That's my van behind, in the second photo.
Posted by Sandra Dodd at 10:17 PM No comments:

I'm home, but Keith is in surgery having his right shoulder replaced. I've been to the hospital twice today, once to take Keith at 6:00 a.m., and then back again to take the fancy foam and velcro sling. He had one from last year (shoulder surgery on the left, not as extensive as this one) and they're expensive, so I went back out into the snowy, icy world to deliver that. 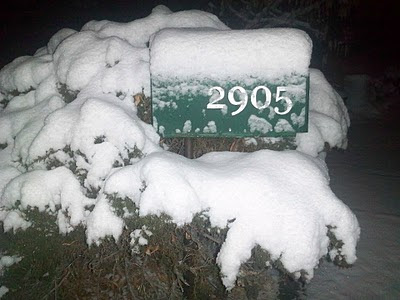 When they call, I'll go back again, to see him into his room and hang out a while. He will be there perhaps two days, maybe a little less.

Snow is beautiful from inside a warm house. It's wonderful to walk in, just for fun. But to drive in when one is nervous and afraid because a spouse is unconscious and being cut upon by strangers, snow is not friendly. It took me an hour to get there, drop that sling off 30 feet from the door, and get home. It's five and a half miles.

I wore a scarf I bought in India, and driving home 20 mph on very icy roads, there was Hanuman swinging happily. I guess orange plastic Hanuman (or as ours is known, "HanumanTana") isn't much used to snow.

Hanuman on a warmer day
(not the photo I was looking for, but him in Texas, and a song Keith likes)
That "HanumanTana" was Holly's word sculpture.