Holly is sick in bed, so I'm going to the gym without her.

Kirby called. He is still employed, but 600 other Blizzard folk are not, as of the 29th, and his shift "yesterday" started late Wednesday night, which is when they found out who stayed and who would leave with a quite-decent severance gift, but sudden unemployment. High security measures during and after the layoffs. Kirby's nearest involvement was telling his team members which should go to one room, and which should go to a different room. Eleven of his team of twenty-some was let go. He said he had survivor's guilt. He was glad to have his job, and he likes it, but the mood was dark, and security was heavy.

Keith came in a couple of days ago frustrated to have learned that he won't get a raise next year. But Keith, too, is still employed.

I'm working on tallying up my travel expenses and book sales, printing costs and office supplies over the past year. I have a hobby/vocation that supports itself at about a break-even level, but that does take the pressure off of Keith to pay for me to help other people unschool (as he has done several years in the past).

I have solemn gratitude this morning, rather than the usual bubbly gratitude. 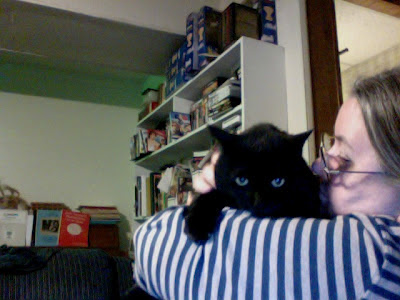