Passenger ferries sail from Yvoire in France on Lac Léman to Nyon in Switzerland." (more where that quote came from) This map shows four ferry routes. We were the short one, across the smallest point. 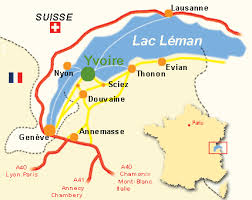 On Thursday, June 7, we drove to Nyon and because the sun had taken its sweet time coming up, so I took my sweet time waking up, and we didn't rush, by the time we got to Nyon, the next ferry would only give us an hour and some of time to see Yvoire. I had no idea how late in the day it was. :-) We thought of waiting until the next day, but the kids had never been on a boat, and I figured I was going to get to take enough pictures in an hour.

It was fun! The first ferry was smallish and fast. There were only eight people on the whole thing. Two older couples and us. We had a picnic lunch, and they had tables, so we ate and the kids could run around.

The medieval town was small. There were two intact gates (which were probably the only two gates, unless there was a smaller gate into the main castle, which I don't guess was still standing anyway. There was no gate on the side where the water was. One to the west (the first two images, from the inside and the outside) and then one to the southwest, nearer to the church and the castle:

There were lots of old buildings, though, and some more like 200 years old, but they were almost all tourist shops, which was okay with me. I liked the doorways and stairs and rooflines.

An internet page had already told me the church tower was mid-19th century, but the lower main part of the church was early. Expansions have made it mostly replaced parts, but it's nice. It seemed quite current and active. Here's their tourism site: yvoiretourism.com

On the way back, we rode on a larger steam boat with two enclosed sidewheels. There are several steam boats and formerly-steam-powered boats on the lake, apparently. This one was named Savoie.

Here is more about this particular boat. If you go to the full collection of photos from June 7, those before and after the boats are just-whatever from the drive there, or in Nyon, or the drive back to Claire's. http://s26.photobucket.com/albums/c111/SandraDodd/Europe/Sandra2012/June7Yvoire/
Posted by Sandra Dodd at 5:59 AM

Lovely photos, I just love the flowers and plants with the stone buildings.