Well, hell. (That rhymes aurally and visually both, though well mell would be prettier visual; bummer it doesn't mean anything. Maybe in Wales they could do something with well llew...)

It's still morning in the U.S. and people are giving up already left and right. I will add to this reportage as the day goes on, which should be fine, because unschoolers should be staying away from the internet if they don't want to learn something today anyway.

Sarah Dickinson made a cake while attempting not to learn: 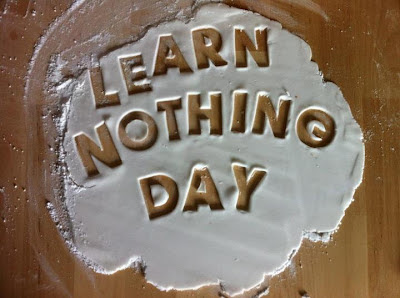 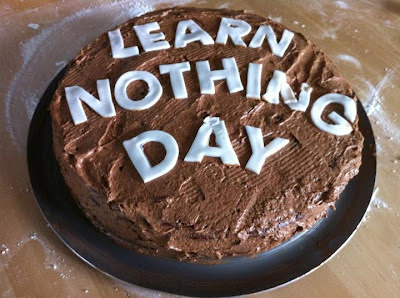 Kelly Haldorson made a graphic image that was shared around Facebook. I looked at some of those. 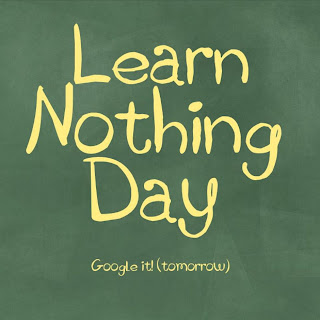 Is that like smoke-a-cigar day or cut-yourself-on-purpose day? Why chose to damage yourself? Thanks alot Google, we have one more evidence that you are NOT looking out for our interests, rather herding us like sheep being stolen from the shepherd.

In order to blame Google, she would have to NOT READ that I made it up and Holly did the art.

There was a little discussion on Facebook where I said it was like a game, and you join in by showing you know how it works. In response to a question, then, about whether it's a holiday or a game, I wrote:

Well... it's a holiday when people demonstrate what they've learned about learning by attempting not to learn, which is kind of a science experiment and kind of a festival and sort of a game.

All I did was open Google this morning while having my coffee and right there on the home page I learned that today is Amelia Earhart's 115th birthday. So happy birthday to her, and to you, and I failed miserably once again at Learning Nothing :)

Big fail here!!! Woke up breathing so I knew that the chances of success were absolutely zilcho. LOL Loved our failings yesterday:) x

Learning Nothing was hard and ultimately impossible:

This was our first year celebrating! Unfortunately, I'm afraid to report that we failed dismally before I could even make my morning cup of tea--we woke up to a trail of about a 1000 ants going from an anthill near a shed out back (about 20' from the kitchen window), up the side of our house, through a hole at the base of our kitchen window, around both sides of the sink, going down the front of the cabinet and underneath, to where our compost bin is located. What amazed me was that they marched directly around our fresh strawberries, grapes, and last night's unfinished sandwich in favor of rotting goodness.

In trying to redirect these small insects, we learned that cinnamon is the way to go. Sprinkle some around the opening where they're coming in and voila! They do an about-face and move on to another attempt to find food.

Perhaps next year we'll just try staying out of the kitchen period. That way we won't need to worry about learning anything in that room of the house!...now what to do about the other rooms...hmmm.

Oh, and my 4 year old son thought yesterday's ant "experiment" was so interesting that apparently he thought he'd replicate it (unbeknownst to me)... with a hotdog under the couch. He was delighted to find a new trail of ants coming in through our front door this morning!