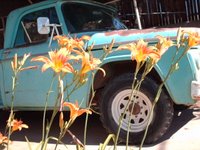 Unlike most of the things in my yard, I paid money for these day lilies. Last spring I put them in and they bloomed a little , but were short. I didn't know they'd get so tall. The other day there were 12 blooms at once. They're pretty anyway, but against the turquoise truck they're especially nice. They're called "fulva." I've already gotten my money's worth, and there will be more of them as the years go by.

The years go by, unevenly, in bursts of speed and in long quiet pauses. Maybe some people's time passage is smooth and even, but mine never has been. One hour will seem to pass in an instant while another is big enough to do nineteen things. I don't mind.

3:33 and I'd rather be asleep. I hear the TV on in Kirby's room, up above. It's not too loud at all, the world is just relatively quiet. It was too hot to sleep, and I was dreaming lots of little jittery dreams. I don't mind that either; the night before this I slept long and hard.

Yesterday Kirby called me on the way back from work wanting a haircut. He said he was nearly home. I arranged a hair cutting set-up and started right away, because he was scheduled to be somewhere at 3:00 to help choreograph a sword fight scene for a film a friend is doing, and after that he had to go straight to the cast party of the film he was just in, which is also local, independent and totally unrelated. He wanted his hair buzzed off. There's a pirate photo down below that shows how long it was.

I had cleaned up the room and was taking the vacuum cleaner apart because it had stopped working. Pulled out some impressive wads of Kirby-hair just as Marty arrived, wanting a haircut. So I put another sheet on Keith's desk chair and got the stuff out that I had just put away. I don't like cutting their hair, but they like me to. I don't know why; I messed Marty's up so it's shorter than he'd wanted. Luckily they inherited hair-grow-like-crazy from both parents. Kirby's is lots like my dad's—thick and heavy textured. Marty's is a little like my sister's and husband's—lighter and curlier.

Kirby called from the cast party. I had asked him to see if the Matthew DePaula who's the star of the movie is related to John DePaula I grew up with. Yep, his nephew. That's so cool—another welcome denial to my claim that Kirby was working on a movie with people I knew nothing of. I've never met Matthew, but now I suppose I might at some point. His dad's a bit older than I am, but we know each other a little, and the brother my age I've known since we were seven. We had many adventures together, over the years, and his family was one of the greatest I've seen. There's another brother my sister's age, and then an adopted sister. Their dad, Felix, was from Queens NY and their mom from Trinidad CO. They had a WWII romance of some sort and settled in Española, which was good for Española. I'm glad to have known them, and seeing how they were with their kids helped me be a better mom. I remember their house well, and the safe and peaceful feeling it always had.

When I'm gone my kids will probably still have some of those flowers, and some kindness I picked up from families like the DePaulas and some better haircuts.
Posted by Sandra Dodd at 3:29 AM