I'm Jealous of my Cats 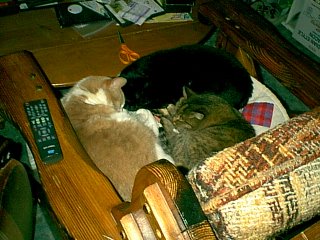 I've been sleepy and restless, and that's not a good combination. I envy the cats.

Marty usually works from 6:30 til 3:00, but he comes home at 10:30 for lunch. He didn't. Just before 3:00 Holly wanted me to take her to Taco Bell, so we stopped by the store where Marty works to see if he wanted to go or for us to get him something. Holly went inside but couldn't find him. We went on. When we got home he wasn't home. When his dad got home at 4:15 he wasn't home, so by then I was sure he was dead, or kidnapped. Holly didn't think so but she went along with it. Keith didn't think so, and he walked up to the store to see.

Turns out Marty had been asked to do a special project for more money, after three hours of work. He ate there, mid-afternoon, kept working, and had worked altogether 11 hours by the time he got home. Then he went off to SCA fighter practice with Keith.

Meanwhile, Kirby went to the dentist by himself after work. That's not a big deal. They told him he owed them $140 and he paid them. That's a big deal, and I don't think it was right, and Keith or I will call tomorrow and ask why. But what's really cool is that Kirby could afford to give the dentist $140. (We'll pay him back in any case, and figure out if it was a legitimate charge.)

Except for driving Holly to Taco Bell and making cookies and spaghetti sauce, I've done very little today, and yet I still want to sleep like a cat. They never even knew Marty was gone. They might be surprised to learn Kirby even has a debit card.
Posted by Sandra Dodd at 5:53 PM