I'm saving some things from facebook, from a discussion of a funny, well-written article on tiny houses. In case facebook is archived forever, here: blah blah Tiny Houses


It's my writing below:

I think what makes tiny living possible is MacBooks and iPads (or their equivalents). And cellphones and internet.

The reason our kids didn't fit better into the house we had before (where Marty is now) with its 1200+slightly more sq ft is because before they were born, Keith and I already had lots of music, books, projects.

Picture a 1990's computer and printer and telephone in a tiny house. And a VCR and some tapes and a 1990's TV. Where y'gonna sleep?

But these days my projects are on my website and blogs. Photos don't take space. Music is on the phone and the computer. Even letters from relatives aren't taking space.

But what about sewing and woodworking? Keith and I still need a big house.


I keep my computer's back-up drive in an old VCR rental box, wrapped in a green linen napkin. There's some artsy/practical mixing of eras. smile emoticon I stick it on the shelf like a book, in my office, and it's safe to throw into a suitcase.

I've had a computer broken and one stolen when I was out of the country, so I keep the backup current, and never keep it in the same bag as the computer.

Oh, and when I visited India, in the Phoenix airport on the way home, the computer started dying. The next day it was gone. I did lose some notes, names and addresses, but I had been backing up the photos. So back up your computer whether your house is tiny or huge. 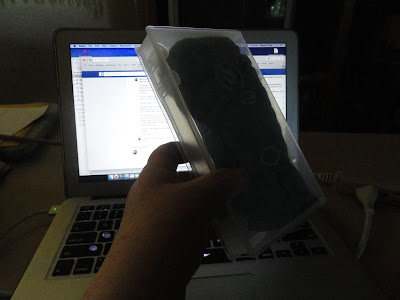 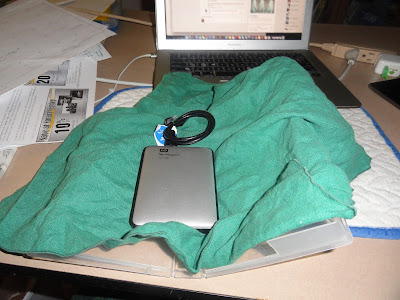 With a hot knife, I took out the post that held the video tape in place.

We live near where there was a large video rental store, and used to find boxes in the dumpster. I've used them to ship Thinking Sticks and other small things in the mail, and am nearly out of them now. I should have picked up hundreds of them; they're so strong and solid.

Where, in a tiny house, would one store valuable dumpster-diving finds?