Halfway out of the ICU

Keith will be on 7 South (again, where he was temporarily a week ago) when a bed opens up there. Today, then, the doctors skipped him, on their rounds.

Yesterday he was approved for thick liquids, and eating. Within an hour, they brought him a full big meal with thickened lemon flavored water which he didn't like or want, Jello which he had some of, applesauce he didn't want, turkey with gravy, mashed potatoes, and the vegetable he hates most in the world, peas. But that was easy to leave on the plate because he wasn't even close to nearly ready to eat turkey, and didn't want to try mashed potatoes.

This morning, the nurse said breakfast, for Keith, was two bites of an orange, one bite of eggs, and one bite of French toast, which he thought was vile. Still, he's starting to eat. (and complain)

A chaplain came by—nice guy I met before, AO Ferguson of the Palliative team. Keith had no concerns, so AO and I talked about harpsichords and Renaissance music a bit. He said world recorder day just passed. Ah. I missed it. :-) He saw in on CBS Sunday Morning, a show I usually watch, but yesterday I came to the hospital really early. Maybe a chaplain should've been in church on a Sunday morning, but he probably gets enough service and inspiration at work.

Now there are two physical therapists, and that's probably way more interesting to Keith than anything else that happens here. Yesterday was the first day, and he sat at the side of the bed, but today they're doing lots more, and they've brought a walker, to see if they can get him standing.

Of his big IV tree, he's only on antibiotics, now. There are a couple of things going into the feeding tube, which is still in though they're not putting the bag-o'-food in. None of it is sedative, though. Since Saturday afternoon or so, if he's sleeping it's real sleep.

Two doctors were here from "the pulmonary team" earlier to evaluate whether to take last and original chest tube out. They're starting to think maybe the oxygen it's pulling is coming through his skin and not from the space outside the lung, which is shrinking anyway. They ordered a CT scan, and he will be wheeled away for that, in a while. Other scans happen in the bed. I've asked, and the doctors asked, too, for them to say which ribs were broken. That's Keith's main question, and people have shrugged like it's not important, but it's important to Keith.

Though they did some moving around in the bed, when they had Keith sitting up, he was too dizzy, then to do more. They asked him to tap his feet on the floor, and he was too dizzy to help, then, so they're putting him back in the bed.

Two odd things are happening. One is that though Keith is no longer an ICU patient, really, he's still in the ICU. His nurse has four patients—1, 3/Keith, 17 (where he used to be—can't even see it from here, it's on another hall), 19. Before now, Keith's had a nurse to himself, or a nurse with one other person, next door. I was assured that she checks once an hour. That's not much, but if he's not considered to be in need of intensive care, that's enough for them. Only he can't use the call button. :-/ So I stalled before going to lunch, as long as I could. He's trying to sleep, but can't, very well.

The second odd thing is related. Keith thinks he can move more than he can. He wasn't able to tap his feet on the floor, for the physical therapists, earlier. He has not stood, nor sat up on the edge of the bed without support. But he asked me sharply "Where's that toilet? I need to sit on the toilet." There's no way. I asked for help, and got the bedpan to try to help him, and he peed in it, but I couldn't do more, and we didn't get help in time. At least I was here.

Then when he was cleaned up and was relaxedagain, he told me he wanted to sleep on his side. I asked if he wanted me to get people to help him, and prop him up with pillows. No, he said, he could do it. He can't, but I didn't argue. I figured if he fell asleep that would be good enough, and he did. I makde sure the sheet and blanket were good before I went to eat, but when I got back he said he didn't want anything, just to sleep on his right side, but he could turn himself. So I pulled the covers up and toward his left, saying that way he would still be covered up when he turned. He can't turn.

I'll be glad when he's moved somewhere where it's warmer and he actually is a patient. He has hiccups again, and they're painful even at home on a good day, but with broken ribs, it's worse. Yesterday there was a drug for hiccups, so that he could get rid of them befoe the speech therapist came. Today, doctors on this floor aren't his doctor, and unless cardiology prescribes for him, he can't get anything. And all they care about is his heart—not his ribs or hiccups or pain or delusions. The delusion of he afternoon, though, is that he can turn onto his side, or get up and go to the toilet. Not yet.

I'm home. They were going to take him for a CT scan, so I left when they wheeled him away. They think he'll be moved to 7 South tonight, so I'll check before I go in the morning.

Two things I learned later in the day to day that others knew earlier:


Because he only ate some jello for dinner, and three bites of not-much for breakfast, the tube feed was reinstated. They never took the tube out because they were using it for a couple of drugs, but they put it on at 40 instead of 60 (numbers that might make sense to some of you). I wish I had known before I kept trying to get him to take at least one cracker and a bite of his lunch banana. I ate those myself on the way to the parking lot.

And the other thing is that his sternum is broken and several ribs. He kept asking which ribs and nobody would tell him, so I've pressed them to find out and let him know. I bugged every human who came in the room today and they mostly said they had no idea and no way to get an idea and I'd tell them to find someone who did, because it's the only question Keith had asked at all in two weeks. (Before, I thought two ribs on the left were all.)


Photos from the parking lot, looking west on Saturday morning, and east as I was leaving today. I thought mountains over and among tall buildings might be of interest to flatlanders. The parking structure is tall enough that I can see the mountains over some of the rest of the hospital, from the top. 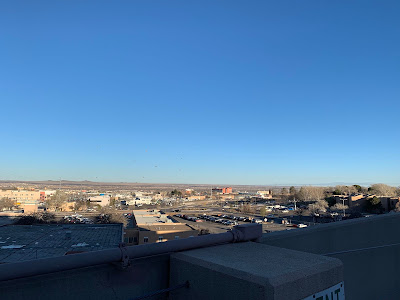 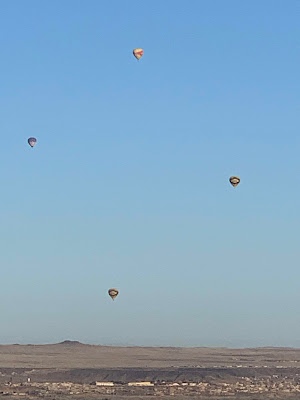 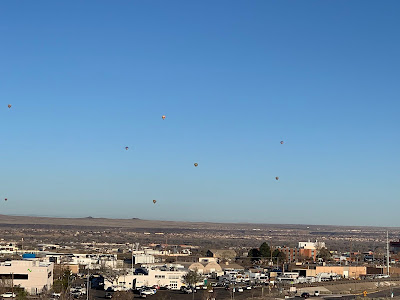 The first is the Sandias from where I was parked, but then I backed up to show you the nearer mountains and the moon. 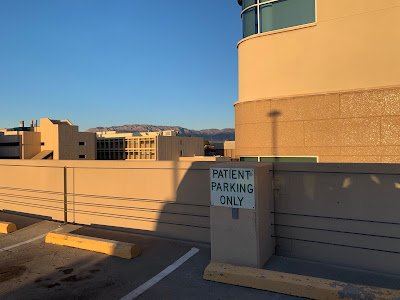 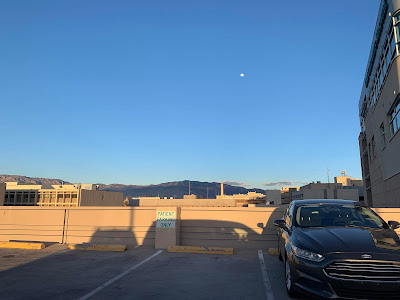 Moving to 5 West, and not coming right back! (Click to read more.)
This might be where Keith's memories start, though he does remember fighting off five attackers in the ICU
(when they tried to restrain him, when he pulled tubes).
Posted by Sandra Dodd at 11:20 AM

Sandra, you might consider speaking with a patient advocate about some of the frustrating issues with Keith's care. It's not so much like making a complaint as it is talking to someone whose job it is to help you and Keith get him the care he needs and get your questions answered. They can ask, for example, what the medical staff's solution is for him not being able to use the call button, or help get coordination of care to get him medication whenever he needs it for his hiccoughs -- and get answers about which ribs are broken. The hospital has a patient advocates coordinator office. You could either call the switchboard and ask to speak with them, or just ask where it is and go see them when you're there

Thanks, Laura. They have a palliative care team that can help, and the charge nurse has taken a couple of my complaints to heart and spoken with people. I didn't want to do any formal complaints.

Today I spoke with a social worker who told me how the next few steps will go, and about advocats, and the social work case manager I'll deal with when Keith is out of ICU (tonight or tomorrow), on the new floor.

Mostly I've been very happy. Partly because most people at the ICU were great, the slackers looked worse.

Thanks for the ideas. I might need an advocate yet.

I'm sorry things are progressing slowly, but I'm grateful (for you all), that they are going as well as they are! My maternal relatives all had heart attacks, etc. and I am amazed by the much improved care they have been able to give Keith; a good time to be alive, and to benefit from medicinal & technological strides.

I also wanted to say that my kids and I enjoyed seeing a flat, dry-ish landscape through your lens. So different from the view where we live (even at the hospital!)

Lastly, I am impressed with how well you have been managing and coping- it can't be easy. Still in our thoughts and wishing you the best possible recovery,
Sukayna