A few days of waiting

Feeding tube is out, Keith is taking pills himself with water.

He's having a bit of his breakfast, and with the pineapple and orange slices (real, not canned), I made a bit of juice for him. "Glucerna carbsteady therapeutic nutrition", chocolate, on corn flakes was the best part. (Better idea than full skim milk and artificial sweetener on cornflakes.) Still, he doesn't want much.

He's wanting to go home, but there's no way. Because the feeding tube is out, and the chest tubed is clamped off again (trial to see if it's really needed). When the chest tube is out, he'll be waiting for physical therapists and being frustrated that he'll probably be here another week. He said he's getting bored, which means he's better.

He sat up on the bed, transferred to a toilet chair, got tired and hot, and got back in bed. That's a pretty big deal, and though his joints are stiff, he still has his strength, and bodily awareness, so I'm guessing physical therapy will go smoothly.

Here's how aware he is: He told the PTs that he was having an xray at 10:30, ordered by Pulmonary. That's true. Nice.

The chest tube is gone. (Third chest tube, removed about 10:45.)
They said they might need to turn the oxygen up, later, but the nurse just came in and turned the oxygen down. Keith's sensor was disconnected (by PT, or X-Ray, or Pulmonary), so when she hooked it up he was like a genius of oxygen-breathing.

Kirby visited Keith after I left, and said Keith wanted him to make sure I knew that Keith does NOT want a mechanized electric bed, when he gets home. Fine. But he's willing to have a new mattress. Good.

On the 17th (five days ago) I wrote "Yesterday Keith was so much better that today I'm taking his glasses and his phone to him."

He still hasn't wanted his glasses, or his phone. He said he doesn't want to try to focus. Sleeping is his favorite thing, but it's hard for him to stay asleep because so many people are in and out, including me. I've tried to go less, or not stay as long, but sometimes it's good that I'm there for one reason or another.

He'll probably be out of there in less than a week, and into a rehabilitation facility for a while, and then home in April, sometime.
He seems to have all his mental facilities in there—not always all unhindered by exhaustion, frustraion and confusion, but he's remembering details about the work being done at our old house where Marty lives, like company names, his contacts, the name of the woman who answers the phone at one office, what we owe, and what needs to be done before final payments—his passwords to online banking. This are the kinds of things I can't remember on a healthy, calm week!

Every day I carry the comb and detangler Holly sent with me nearly two weeks ago, and a bag that has Keith's phone, his charger, and his glasses. I offer glasses every day or two, and so far he has said no. I think tomorrow might be a hair-combing day. I have little rubber bands, and if I can get it combed, I plan to make a braid.

I was at the hospital in the morning and left for a few hours, during which Bela came but Keith was sleeping and he went away for a while.

My trip out was to buy a new mattress (to be delivered April 5), and to go home and look at some bills, to come back and report, and to print something out from Keith's computer notes. Done and done done.

Keith is eating a few bites of this'n'that now. Three bites of grilled chicken, a couple of bites of mashed potatoes, some cooked carrot, and some leftover pears. Ate all of some salad with italian dressing. Drank skim milk. End of dinner report. :-)

Outside his door is a sign about letting him sleep. They've tried to let him sleep in the daytime, too. I was sneaking in this afternoon and his oxygen monitor beeped. Being awake in the day might help him with this, though: 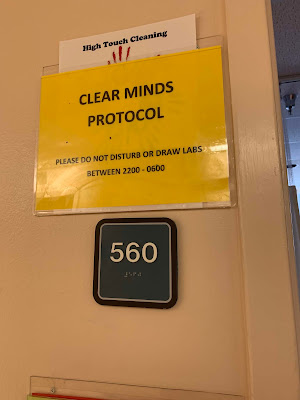 Two days ago when Keith found out he can't drive for six months, he said maybe we should go on a cruise to the islands of Denmark. So I thought a bit about getting him a passport, and visiting Carolyn in Sweden, and whether we would really do it.

This morning before daylight, all the electricity went out at the Albuquerque airport. Backup generators failed. Big mess. I didn't know, but Keith had seen it on the news, and told me when I got here. What I had seen, to tell him, was that a Viking ocean-going cruise ship was disabled off Norway, in bad weather, and all the passengers were being taken to land by helicopters that held 15 to 20. That was going to take quite a while, to get everyone off, but at least the ship didn't sink. That's good.

Those are not good omens for a Viking cruise tour of the edges of Denmark, but on the other hand, the odds of it happening twice are small. (Right?) Like the odds of having two (or three) cardiac arrests in one day, and living to talk about going to Denmark as a distraction, if one couldn't drive (to the swimming pool and to breakfast, to music practice, to SCA events, to Lowe's to buy lumber, to Steve's to work in the shop and swap stories, to Costco, to take my van to get gas at Costco, to take Holly's pickup to Costco for gas...)

Keith's asleep, but his oxygen went below 90, so the machine is beeping. He woke up. I told him if he could let that machine train him to breath deeply when it beeps, he wouldn't hear it so much. He went to 87 before breathing it back up to 91, where the beeping stops. He's not using outside oxygen at all now.

He's not able to get out of bed, or walk, but he can rearrange himself in the bed, and I saw him turn over completely on his side yesterday, to go to sleep, before I left. He's starting to watch TV, too. He's still not interested in having his phone or iPad, though. He wore his glasses briefly, to look something up on the computer, and then said they were too uncomfortable, in the bed, at that angle.

I'll go home soon, and tomorrow I'm doing some things around the house.

I just got home. When I left, Keith was watching figure skating on TV, and was hoping to see Saturday Night Live, if it's on, but he was also sleepy. He reminded me to get gasoline on the way home; the van was below a quarter tank, and he's usually the one to buy gas. I asked if he cared where I got it, and he said no, but closer to the house would have better prices than there by the hospitals and the freeway. Very Keith-kind of thinking. :-)

I didn't go in today, but I have reports from two groups of visitors that he looked great, was mobile in the bed (could rearrange himself easily), was chipper and talking politics. I'm glad to have missed that part. :-)

Monday/tomorrow I'll go to hang out and see if it's time to start his exit strategy. If all goes well, he might be out Wednesday or Thursday, to another facility, but we don't know where yet.


Week 4 in the hospital; read more
Posted by Sandra Dodd at 9:35 AM

I am so relieved to read about how much Keith is improving. If I can do anything at all to help you, including cleaning your bathroom, please let me know.
- Jean Crawford

Great to hear! I don't know Keith, at all, except through what you have shared in the unschooling circles....but I had a chuckle over the quarter tank of gas (that's my cut-off!) My kids also know the drill ☺️ I would say his clarity is a reassuring sign, and I'm still sending healing vibes your way. I think you are right about the cruise ship odds, too. Life is too short to avoid the good stuff when it comes your way.
Sukayna

It seems like a huge turn for the better in one day. Hooray! I think Iʻve been holding my breath...

A cruise to Denmark? You should totally do it.

Can he get a phone call from those of us who are far away and can't visit?

He doesn't want any phone calls, even from me. :-)
There is a phone he can't reach, but sleeping is his best therapy and also his best escape, so he would rather sleep all the time he can.

I was wondering about cruise ships -- how many there are, and what are the odds of a problem trip, and so on. Turns out there's not as many physical ships as you might thing -- 314 of them according to one count. https://cruisemarketwatch.com/capacity/