I'm that mom who follows the crowd!

I'm not usually that mom who follows the crowd, but this crowd was worth following.

Flo Gascon posted something, and Ronnie Maier picked it up, and then Frank and Jeff and a WHOLE bunch of others wrote, and pretty soon they had themselves a movement.


I'm that mom who said "sure," and "that's okay," about so many things that when the kids were older they shared their fears and secrets, their firsts and their freakouts.

When younger boys were wondering where they could go to play video games, or to play Discwars or Legend of the Five Rings or something, they knew they could go to Kirby and Marty's house, because I'm that mom. I'd feed them, too, being that mom. :-)

When older kids were wondering where they could go to recover from frustration and anger, or to confide in someone, some came here, because I'm that mom (or they just as easily got help from Kirby, Marty or Holly).

Now that my kids are in the late-teen-to-grown range, sometimes I'm that tired, old mom. I'm that mom who remembers nursing and carrying and changing babies who couldn't put their own pants, shoes, coats or seatbelts on, though, and so I really appreciate the more recent freedom to sleep late, go shopping alone, and let my kids help me out sometimes, because they're some of those kids. 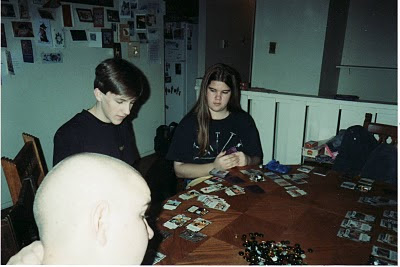 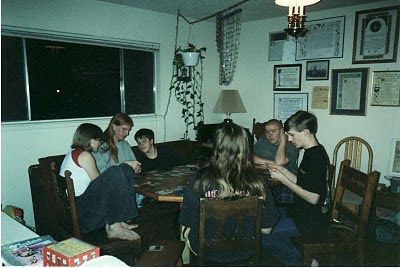 When I went looking for gaming photos I found the two above, but found an older one too, from Marty's Pirate Party, when he turned six. On the back in his grandmother's handwriting it says 1/14/95. That's Marty with the pirate vest, and Kirby on the floor. This was a game of "Dead Pirates." It's actually called "Dead Lions," but that wasn't the theme of the party. The object is for one person to be it, all others lie down quietly, and anyone who laughs is up with "it." The last one to laugh wins. 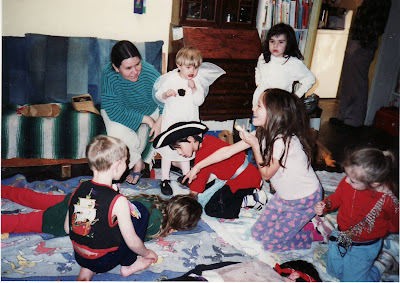 Holly was wearing angel wings. That's me on the couch. As I'm writing this fifteen years later, Holly is out with the girl standing in the back in white, Caiti.
Posted by Sandra Dodd at 4:44 PM

This is really sweet, Sandra. Thanks for following the crowd just this one time.

And I love the look of your sidebar right now. Nearly every blog is titled I'm That Mom. Cool!

A great addition to the crowd! :-)

And thanks for being that mom and having those kids who showed us that life really could be lived this way.

I got the "movement" reference, btw. I think Arlo would approve of this one, don't you?

Yeah, and it's a Group W movement! Just wait til it comes around on the interweb.

You are that mom, and thank you for being that mom to help me be that to my children.

I love it all, but completely relate to this right now, "sometimes I'm that tired, old mom." *g*