Computer tech guy (for the record)

I'm writing this partly so I'll know when and who.  Kirk Slowe just came over and made everything relating to our computers and our printer WONDERFUL.   If you're around Albuquerque and need a computer tech guy who makes house calls, there's the guy.  Mac.  But he did get the PCs back online (the two that didn't get the new modem when it was installed last month) AND he got them to print wirelessly.  Woohoo!!

So FIVE printers can print wirelessly (whereas before that I was having to physically plug it in to mine, to print things other people e-mailed).  Even Marty's ancient desktop is online and can print.  Before The Problems started, both MacBooks could print wirelessly, but we didn't have any idea the PCs could be cajoled to do so.

What did not work was my tweaking my backup.  The old G5 hard drive is too small now to hold its own corpse and the backup of the MacBook.  It worked for a while, but now I need to get a bigger, newer external harddrive, so I'm going to do that now.

AND... Julie, James and Adam Daniel sent us a box of Christmas foods!  Marty and I opened and ate a few Hobnobs, but the rest I'm saving to share with the family.  Beautifully wrapped bunch of gifts!  A couple are tins, so probably shortbread or other such Christmas cookies, and Holly will get to keep the tins.

Here's the note from Adam, and the cross-stiched card from Julie.  I am VERY GLAD to know their family.  And they're coming to visit in January.  (Other people can, too...) 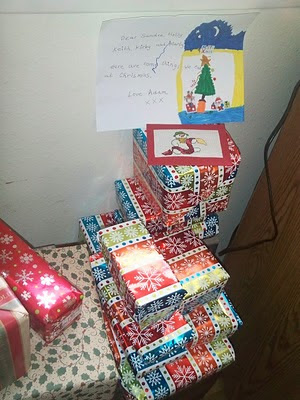 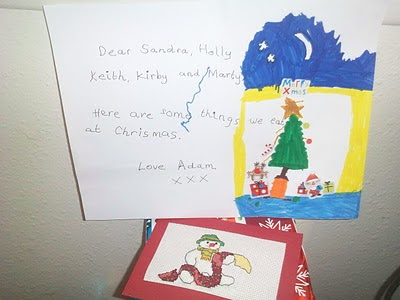