The benefit of a big house

One of many benefits of a big house is that Holly and Brett can have a romantic dinner of their own making alone at home while I'm in the back (an attached apartment, but separate roof, separate building, odd kind of hallway-connector). Keith and Marty are in Arizona until Monday. I have this cool new laptop which makes me more portable, and I have lots of e-mail to catch up on and webpages to tweak.

Here are the flowers Holly's Brett had delivered while he was at work today:

And he was going to make her asparagus with sauce, and they were going to make spaghetti. Holly bought heart-shaped candle holders and red candles. I am just not there at all. I'm back here. See? 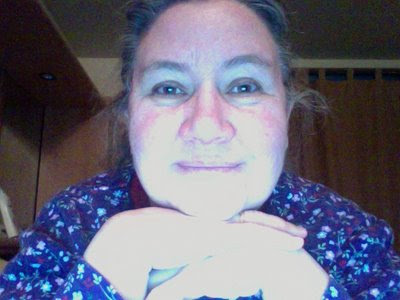 Kirby has called me twice today, just to talk. What a sweetie. I got to talk to Ramona for a long time, too, and spend a lot of the day with Holly. I brought food back here and was preparing as though I'd truly be limited to just what I'd brought in, but realized while I was talking to Kirby that although I'm planning not to go up to the main part of the house, there's a Popeye's chicken right out the back gate, and a grocery store up the alley. There's a Twister's right across Juan Tabo and... a fridge in the next room. So although I was preparing as though I were going camping alone, it was oddly inappropriate. Still... I've folded laundry and played games and listened to music and read and written.

Happy The Day After Valentine's Day, Sandra. Your work helping unschoolers has undoubtedly influenced the level of joy and love my family experiences. Thank you for all that you do!

I can just see where you were in the house...Very cool. I'd love to find a house like that :-)

Sounds like a very cool house layout. What made me smile the whole time I read this, though, was the very cool Mom who was making space for them that way. Sweet.