The Lovejoys arrived from South Carolina on Saturday and that day wasn't too busy; they were tired.
Sunday was busy, busy, busy and my legs hurt at the end of it, but we had gone for a walk, scouted some wood that Keith and I can retrieve later, had homemade banana pancakes, gone to Sandia Crest the back way, found some snow (not much), went to Garduño's (always fun), worked on a sewing project, watched videos, ate sorbet out of its fruit's own own peel (I don't know how to say that)... and that was a big, busy day.

Monday, the Lovejoys went to the Old Town Albuquerque Hotel, or the Hotel Albuquerque of Old Town or whatever its current name turns out to be, where the conference will be in September. They'll be back in various combinations over the next several days before flying back home Sunday. (Also flying Sunday: Marty to Long Beach, to go to Legoland with Pam and Rosie Sorooshian.)

But also on Monday, Keith and the kids came back, tired yet energized, full of stories, seeming bigger than usual, taller than I remembered, braver than I remembered. It was exciting to see them so... not thinking of a better word than "big." Things had gone well and they were embiggened.
Posted by Sandra Dodd at 11:48 AM No comments:

Keith and the kids have gone camping in Arizona with a few thousand others, at Estrella Mountain Park on the west side of Phoenix. Holly hasn't been to that event since she was little. The boys have been some years. This year all three are there. I spent the past couple of weeks repairing and replenishing their wardrobes, and then baked bread, cookies and sausage/cheese things. I did the fun stuff in a clean home and don't have to camp in the dust. But I'm glad the kids get to go, and feel somewhat guilty for not being there to help Keith out. I'll be helping a lot when they get back with all that dirty laundry, coolers, dishes... No problem.

I miss Holly most of all, because she tells me stories and asks interesting questions.
Posted by Sandra Dodd at 9:06 PM No comments:

Ren, you goofy lady (I upgraded that from the original "evil woman"). Next you think I'll be posting "which LOTR Character are you" or "What Boots are You?" ?

Okay, here's the deal then. RenAllen has tagged me in a game of self revelation. I can reveal pretty well, but I can't tag. So here are the answers, and if any reader wants to volunteer to be one of my four, respond with a link to your page and we'll go and look.

I did follow back up the line from the one who sent it to Ren, and have to admit that was fun.

Here are the questions:
4 jobs you have had in your life
4 movies you could watch over and over
4 places you have been on vacation
4 websites you visit daily
4 of your favorite foods
4 places you would rather be right now
4 Cars you have owned
4 bloggers you are tagging

Here are my answers:

4 jobs you have had in your life
4 movies you could watch over and over
4 places you have been on vacation
4 websites you visit daily
4 of your favorite foods
4 places you would rather be right now
4 Cars you have owned
4 bloggers you are tagging
I'm not tagging, but anyone who wants to play can!
Posted by Sandra Dodd at 9:07 AM 3 comments:

How Google and a hot tub help me clean my house

[This was posted last week, and disappeared. I probably helped, but I'm not sure how. Luckily, I had also put it on a hot tub discussion list, and so could re-post it.]


So we have this wood-fired hottub—one of the best new toys Keith and I have had in... ever. I've begun to notice lately how much cleaner our yard is, and our house too! We got some bamboo just the year before last, and it sheds its [fronds? leaves? what's the word?], but they're great for starting fires. A couple of our trees shed sticks when the wind blows. Good! We need those sticks.

Woodlot scrap, from where Keith cuts wood for the fireplace and hot tub, when it's too small and dusty and ugly to bring into the house is PERFECT to dump into the stove of the hot tub.

And for the house, I was going through a drawer of music the other day—sheetmusic from singing groups over the years, handouts I made, copies of things that were sung once 20 years back and weren't so popular with the group we had then. Those can go into the fire. Yesterday I found some ballad-lyrics pages, and those can DEFINITELY go into the fire, because those same lyrics are easily found with google. I only need to keep the obscure things now. Many of the cheap reference books, paperback dictionaries, almanacs, etc., that I've saved over the years aren't worth keeping now. Movie guides published years ago are junk now that imdb.com exists. Magazines kept because of a bio or a science article aren't worth keeping any more, if that same info (and often the same photos and then some) are easily available on the internet.

Old newsletters from SCA groups I was never even part of, that I got in trade when I did SCA newsletters back when they involved physical paste-up with tape or spray fixative. Trash. T-shirts that once had sentimental value, not worth keeping, not worth giving away: into the fire. It seems much better than putting them into the trash, into a landfill. They become heat that we use.

Cardboard boxes I was keeping just in case can be put into the fire. There are other cardboard boxes in the world. Scraps from sewing projects; junk mail; old phone books: they can burn. The vacuum cleaner canister or bag can be dumped into there.

Old wicker baskets or easter baskets which have been holding sewing supplies or catch-all this'n'that in the house first become collectors for kindling, but after a while the baskets themselves can go into the fire. Newer ones (though still old) are at every garage sale and thrift store. Little wicker trash baskets can be used until they're grotty and then... kindling.

We've had this for a year and already there is more room inside the house, the ground is cleaner outside, and the county landfill is less affected by us.

Because we had three days in a row of no-burn nights in a week when Keith's back and shoulder were really hurting him, he talked to his doctor about approving an application for an exemption for the tub, and was given a prescription to soak his shoulder daily for the arthritis. When we get the letter from the city's air quality control people, I'll share it with the neighbors and inform the fire station (I think that was in the small print of the requirements for follow-up).
Posted by Sandra Dodd at 3:05 PM 5 comments:

I guess I didn't miss it entirely, it just swept me along and I forgot about blogs and stuff.

January had two pretty cool happenings: Pam, Roxana and Rosie Sorooshian came to visit us, and Marty turned 17 on Saturday, the 14th. Unfortunately, the Sorooshians had to start driving home that morning. Fortunately, last year Marty's friends kind of botched his birthday. So this year they had a surprise 16th birthday party for him the night before he turned 17, cake and all. Pam's kids got to help keep the secret and go to that one. 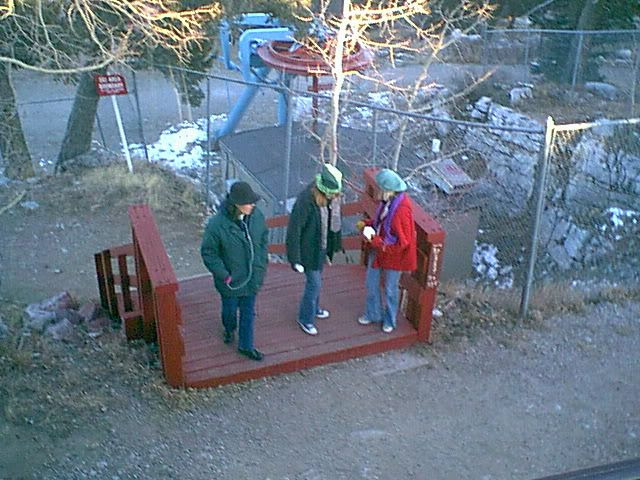 We did some good touristy stuff. We took the tram to the crest of the mountain and ate. The girls got to play in what little snow there was (some crunchy piles and little bits). Bummer they came all the way out here in January and were two miles above sealevel, and still no snow. 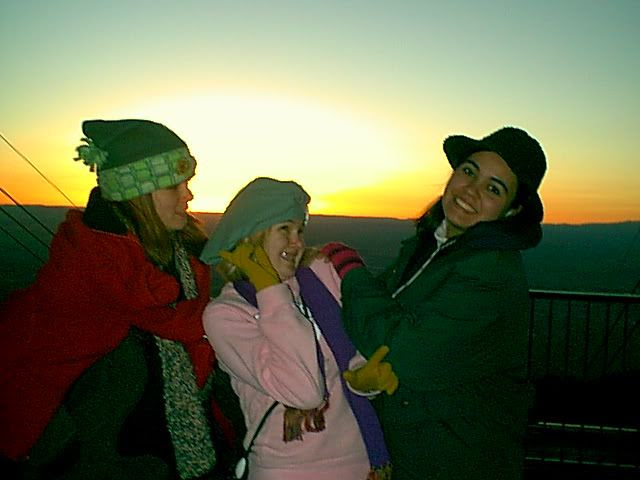 We bopped around Old Town some, and Marty's pick to do for sure while they were here was Explora. It was nearly empty when we were there, Wednesday afternoon. It was nice.

Friday we went to Santa Fe where a couple of unplanned things happened. We went to St. John's College, in which Roxana had expressed an interest, and it so happened that in walking around we discovered there was activity in the administration offices, and when I asked the administrative person whether there was more literature I could take away (hoping to make a pile of stuff for Roxana to take home), she fetched an admissions counselor. Not bad! Not planned, but kinda nice.

Then at the plaza, the girls posed for "Rent photos" and the it's-not-really-a-busstop spot with St Francis Cathedral in the background. Luckily, Holly had just bought candy cigarettes at Señor Murphy's, so they had props too.

That visit gave me a huge thrill. I've stayed at the Sorooshians' house a dozen times, I think, over the years. My whole family has been there twice, and none of them had gotten to visit us. Maybe if Roxana goes to St. John's they'll have more opportunities to visit here.

A less profound thing we did was to visit Marty and Kirby at their respective places of employment, and to go into Active Imagination where Kirby spent his formative gaming-shop years. Now Kirby works at Dion's (a local pizza chain) and Marty at Raley's (a courtesy clerk, formerly known as "sack boy"). So Pam can picture them at work when I tell stories in unschooling discussions. That's cool. I got to visit Roya's (her oldest's) place of work when she was working at a ceramics supply company, years back, and have been with Pam to pick up and deliver kids from college classes.

Marty's birthday was nice. Seventeen. I can hardly conceive of that huge number in terms of Marty.

So this post thusfar has said nothing about February. That's okay. Much will happen in February. Maybe I'll even write about it!
Posted by Sandra Dodd at 1:48 PM No comments: