What I learned from Holly

Holly is good at photo manipulation, and related issues. She showed me how to find a color, from an image, for making matching fonts or lines or backgrounds. I've used that trick quite a bit.

We have three juice glasses, probably from the early 1960's, I got from a thrift store. One day just for fun I photographed one.
Thinking about the heritable personality trait "openness to experience" and thought it would be good to start collecting notes about that, for the benefit of unschooling families.

Helen Davies had brought a Ray Bradbury quote to a discussion:

I was not embarrassed at circuses. Some people are. Circuses are loud, vulgar, and smell in the sun. By the time many people are fourteen or fifteen, they have been divested of their loves, their ancient and intuitive tastes, one by one, until when they reach maturity there is no fun left, no zest, no gusto, no flavor. Others have criticized, and they have criticized themselves, into embarrassment. When the circus pulls in at five of a dark cold summer morn, and the calliope sounds, they do not rise and run, they turn in their sleep, and life passes by.

That inspired me to use the photos of the circus glasses on that page.

This week, someone was asking what to do if adults quiz her child. The child in question is six months old, so it's too soon for her to care. But in the discussion someone used the phrase "my child isn't a circus monkey."

When Marty was four or five (I've forgotten), I wanted him to roller blade for his grandparents. He was really good, very young. He declined. They were getting ready to drive home (200 miles) and I wheedled at him. Keith said (to me, to get me to drop it) "He's not a performing monkey."

True and good point! But what if Marty had wanted to show them and I was the one who had been saying, "No, don't"? And what if someone used "circus monkey" instead, when I already had a page with a circus reference AND a picture of a circus monkey!? Well then it goes on the page.

I didn't think of the page when I wrote my response, but I did think of Marty, twenty years ago, and of Keith who hinted that I should not be a ringmaster.

But back to Holly. The page had a section in red. It clashed with the glasses. The page had horizontal lines as section dividers. They were boring.

I went into photoshop elements to sample the red (somewhat fading away) on the glasses. It was different different places, and had lots of numbers and letters. Not the clean kinds of code webpages need. I picked up the phone to call Holly to ask her how I can find the nearest web-worthy code, and then I stopped and thought "What would Holly do?" So I looked around at my photoshop options and found "Web colors only." Tadaaa! Thank you, Holly who isn't even home!

Holly says she learned photoshop from Marty. I learned it from Holly, but each of us has found things for the others, and that's pretty sweet! 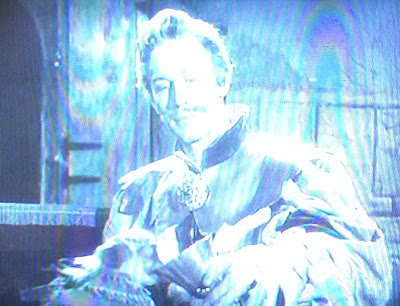 Yesterday on an old episode of Robin Hood I saw a performing monkey in a little coat.
(He's drinking out of the goblet, lower left.)
One more connection, and it won't be the last!
Posted by Sandra Dodd at 7/19/2014 No comments: 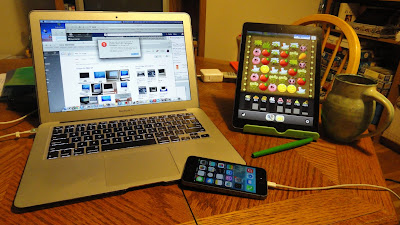 My three kids, in birth order, and then 33 others.

This is a powerful movie that came out over a lifetime ago for people the age of most of those actors. Some of us who are parents of adults now had babies then, or were yet childless. Such a story with boarding schools for rich boys is foreign to most of us, but not to all the people I know. Such parenting is more familiar than the school is.

This is a great movie, and potentially a painful one. If it seems exotic, and out of your experience, that is wonderful, especially if you have children.

Robin Williams and Norman Lloyd are both still living and working.

Robert Sean Leonard, not long after, played Claudio in Ken Brannagh's
"Much Ado About Nothing." Later he played Dr. Wilson in the TV show House, for years.

Kurtwood Smith played Red Foreman, Eric's dad in That 70's Show for eight years, which redeems him as a dad (where even though he was a cranky dad, he wasn't as bad as the movie character.

Josh Charles played Will Gardner for years on The Good Wife.

Ethan Hawke has been in tons of movies, and played Hamlet in 2000.

Below are interviews with some of the actors, ten years later (fifteen years ago).

Don't watch it if you haven't seen the movie.
ONLY WATCH this IF you have already seen the move AND you remember well what happens. :-)

It says "Movie trailer," but it's 27 minutes of memories and stories about the filming.
Posted by Sandra Dodd at 7/03/2014 7 comments: