SandraDodd.com/unschooling has a random quotes generator! I have fewer than 50 quotes in it, but will add more. It's kinda fragile, as things go... It took me a long time to find the little errors that were keeping it from working.

In the course of getting it on that page, I messed with other formatting, so the page isn't as... stable? Familiar. Something about that page I don't like... (to be heard in a Zoombinis voice). Holly and I are going out to see a musical at the university so I'll have to mess with it later, but still I'm very excited that the quotes can be seen, and that more can be added (v-e-r-y carefully).
Posted by Sandra Dodd at 11/30/2007 3 comments:

It helps unschooling and mindful parenting to be aware of *your* kids and *their* unique needs rather than treating them as generic kids with all the worst possible traits.

Joyce wrote that on a discussion list this morning and I put it on my quotes page. I've kept meaning to ask for help collecting quotes by unschoolers.

I have a small collection started here: http://sandradodd.com/quotes
Posted by Sandra Dodd at 11/29/2007 No comments:

This isn't an announcement of new pages. I really did mean to put this on my own daily-life blog.

Working on webpages a few weeks back, I accidentally deleted my backgrounds folder. Most of the stuff was older, and I use photobucket now more than my own site for images. I think the main unschooling page looks better without that pattern I had had since my page was on some old free hosting site I can't even remember the name of anymore.

But anyway, I discovered today that one of the backgrounds that was gone was the photo to the right.

We've been writing (and have before, and will frequently in the future) about reading, and how kids learn to read gradually but naturally, and seemingly suddenly, when they become fluent.

Lately I've begun to feel fluent with html. I used to panic a bit when I didn't know what to do. Things were awkward and frustrating and flustering. Today when I noticed that watermelon gone, I knew to look at the source code, find the image name, and search on my computer. It was there. Now it's back where it was before, too: How Unschoolers Watch TV. Jacki's daughter had done a BEAUTIFUL meal, and it's documented there.

I lost the background to this page, too: If you give a kid a Nintendo... which has a photo of Crystal's cat that I'm also going to use for the Lyrics Game 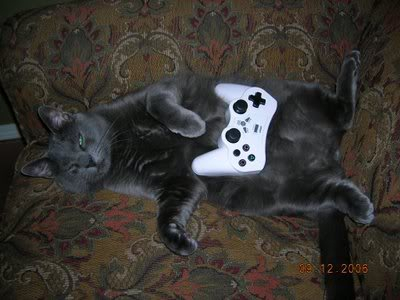 ...but luckily, now I know how to find images from code. And if I can't find it, I can make another one.

It's good to feel a surge in competence. As I get older, that might happen less often, so I'm trying to savor the feel of this one. I can read html by looking at it! Woohoo!

The down side is that I feel I should go through all my pages and fix what I didn't understand before. Eventually, if I live long enough, I guess I might. But I keep adding new pages, and that seems more important that upgrading older ones.

There are several pictures of Marty on Diana Jenner's blog here: http://hannahbearski.blogspot.com/2007/11/marty-experience-meet-ambassador-of-joy.html Down near the bottom there's a highlighted "enjoyed" that's a link to more Marty photos.

Each time one of my kids is appreciated or bragged up, I get a little internal mom-commission. It's wonderful to see them reflected in others' eyes, and words, and photos.

I appreciate those who were generous with Marty, gave him rides and places to stay, fed him and let him experience a different part of the country and make new friends. Thank you all!
Posted by Sandra Dodd at 11/14/2007 3 comments:

Holly's birthday continued a bit tonight, when our friend Bo delivered his gift in dramatic fashion. There was a speech and then he and Marty appropriately tore open their outer layer to show the "Team Holly" shirts beneath, and then Bo gave Holly one to match. 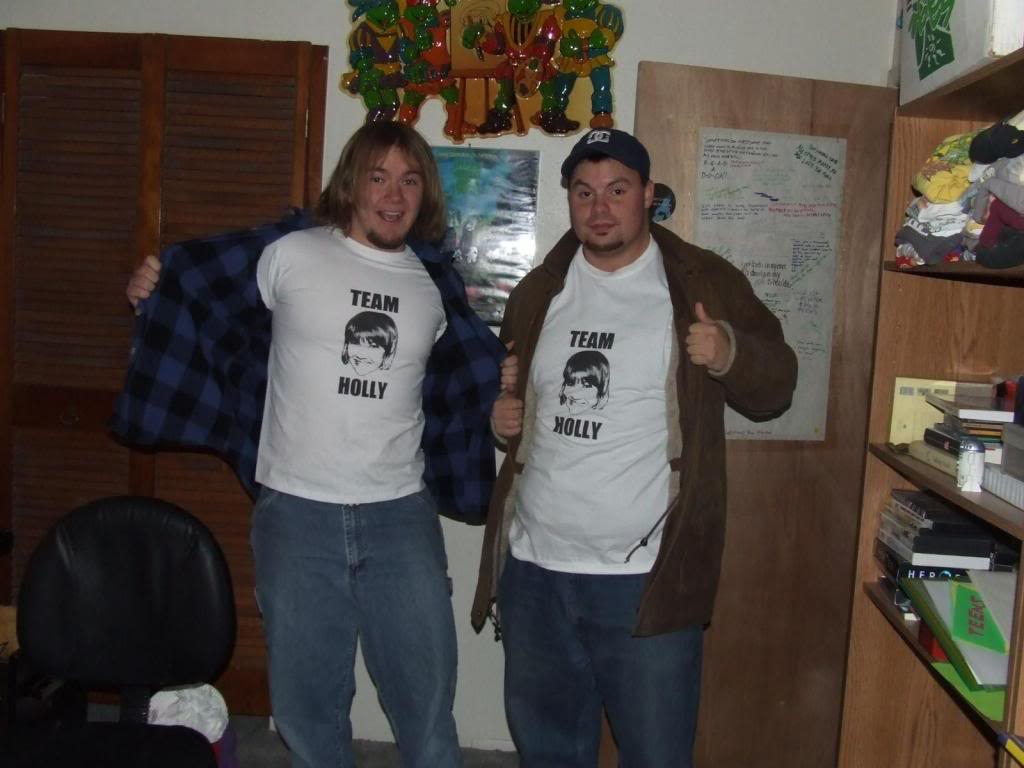 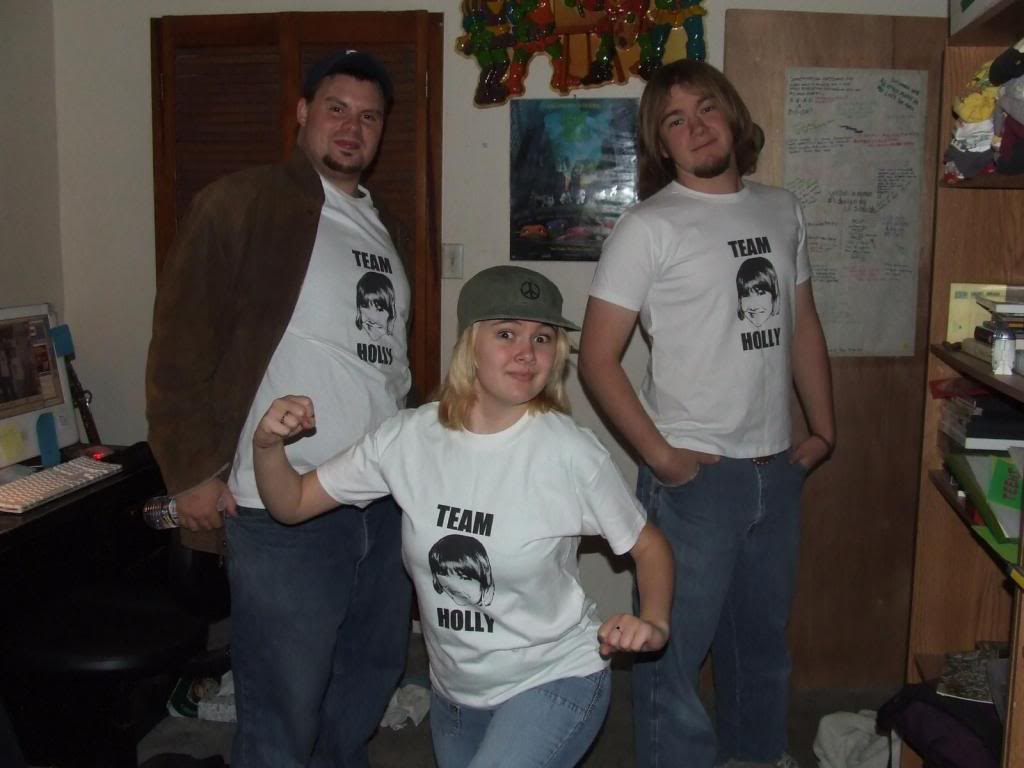 Updated in 2021: They WERE (long ago...) available on CafePress at http://www.cafepress.com/boking They're a reference to similar shirts and sentiments on "We Need Girlfriends," a short series Holly really likes that you can see on YouTube. http://youtube.com/watch?v=omE_8VJN9Eo Holly says the t-shirts start in episode 4 (of 11). When she asked me to watch it I was afraid I wouldn't like it, but it's way sweeter and less obnoxious than it seems right at first. It's potentially offensive, but the goodness outweighs the yuck. Slightly added to when the link was brought, 11/10/07.
Posted by Sandra Dodd at 11/09/2007 3 comments:

Kelly Lovejoy sends good quotes from the UnschoolingBasics list pretty often, but here's one I couldn't stop thinking about.

Someone new to the ideas wrote:

I still find it hard to believe that allowing kids full rein of
electronics for months on end will actually help them learn
self-control. Is there anyone that has seen the end result of it?

Not to be snarky, but... how can *you* controlling someone else teach
them *self*-control?

I was "disciplined" as a child - meaning someone
else controlled my actions (around them, anyway) through coercion and
punishment. I did *not* learn self-discipline. I learned distrust of
and alienation from that parent. Perhaps most harmful, distrust of my
own inner voice. It has taken years (and years and years) to regain
that. "The end result" of not limiting games, TV, etc. is that my kids
are learning to listen to *their own* inner guidance about how much is
"too much". They are learning what *they* enjoy, not what I think they
should enjoy

There was more, and it's good. It's at the bottom of the page on Control. I'm not on that discussion list, and didn't get to comment directly, but because my children are good examples of results, it's been running through my head since I read it.

We started from when they were babies, and didn't take a previously controlled school kid and make the transition. I have helped a few hundred families make those transitions, though, and collected their reports and comments.

If there is ever an "end," the results won't matter anymore. But as long as life continues, the results unfold. Are my children better friends and better employees because of the freedom they had? It seems so.

Some results along the way look promising.

And the end result, for me, is not that ultimately they'll watch or
play less. It used to be, before I really understood unschooling. (and
when I still demonized TV) I used to think "OK, if I "let them" watch
all they want, eventually they'll tire of it and move on." Now, the
phrase "let them" seems foreign to me, and I have the attitude of
hoping what they're doing is bringing them joy, whether that's
watching TV, gaming, building a Lego city, or playing outdoors.


It's a bit difficult to explain how that shift occurred, but the word
"allowing" comes to mind. I let go, then let go some more, and in the
process discovered a deeper connection with my kids than I knew was
possible... and because of the inner work involved, a deeper
connection with myself.

Our lives are surrounded by the "end result" of people who grew up with too much parental control. The hurts can last a lifetime and be passed on to all around. Some adults are catatonic with indecision and fear when faced with the simplest of life's decisions, because they were never allowed to make decisions when they were growing up, and were assured they would have screwed up everything if the parents HAD loosened control.

I see those results every day. I still see them in myself sometimes, and I'm 54 years old. I see them in people I've known since we were kids, as they still must negotiate with the voices in their heads saying, 'No, don't.'

Before Marty and Holly were ever born, Kirby played video games. He wasn't very good yet. (Keith and I had an Amidar game we bought when an arcade was clearing out old games.) He also had Broderbund's Playroom (in black and white at first), to play on the Mac IIsi, and a few other computer games.

When he was five, though, we got him an original Nintendo system. He would ask me to get past the koopas on the second level, but from there he was good.

Now he works for a video game company that does online games. But that's not "the end result." That's another moment in a life full of moments in which he was free to choose.

"I still find it hard to believe that allowing kids full rein of
electronics for months on end will actually help them learn
self-control."

It's not "for months on end," it's for life. And it's not "self control," it's self awareness.

Joyce sent me a link this morning to an article I didn't have on my videogames page. It's not a new article, but it's a good one, and it's at the top of new links there.
Posted by Sandra Dodd at 11/04/2007 3 comments:

Marty is on his way to Portland and then Corvallis, to hang out with unschoolers he knows.

He'll miss Holly's birthday tomorrow, and will miss another couple of things this week, and will return Wednesday night, the 7th.

He's wonderful and I'll miss him. When he gets home he's going to Las Cruces for the weekend for an SCA event. He's a busy, happy guy.
Posted by Sandra Dodd at 11/01/2007 2 comments: