This isn't new, but It wasn't here when I looked, and now it will be.

My friend Helene McNeill worked at Yorvik Viking Center while she was getting a Master's degree in archeology from York. We did the tour in 2000, when Holly and I visted them, when they were living in Kirk Ella. A bit later, they published an image, and she brought me a tea towel. It was a fine portrait of my husband, Keith. Only they never saw Keith. They built an image of a guy based on a grave-found skull. 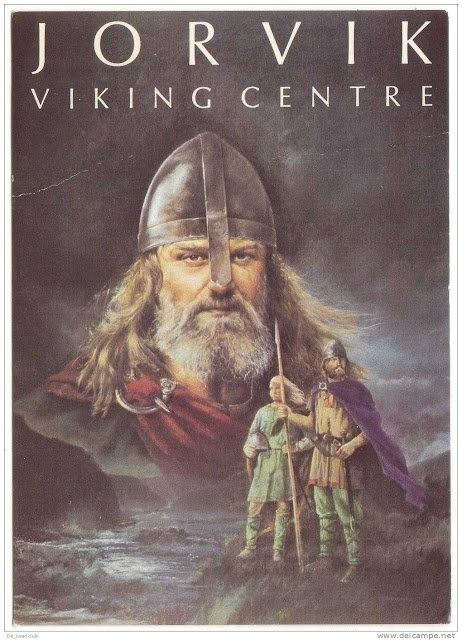 I shared the story on facebook in 2015. Here are some of the comments, and an image as evidence.
Alex Polikowsky:
Did he pose for this portrait?
Sandra Dodd:
Doesn't it seem that way!?
Alex Polikowsky:
Sure does!
Sandra Dodd:
AND this art is from 2000 or so, so the grey was a premonition. :-)

The art has brown eyes. But my friend Helene who was working there then (and brought me a tea-towel with that art, saying LOOK!!!) said they made it from a skull—like forensic reconstruction.
Dawn Todd:
I wonder if they made a 3d version based on the same skull?
There are lots of Viking person models but I don't know if any if them are based on actual skulls. If they did make a 3d Model of this one, as part of the artists process, perhaps it made it in to the display/collection :-)

A photo I found on facebook of my husband looking like that guy above. Keith is in the back right, yellow and red. Marty (our second "child") is middle, same sort of red cloak. It's during a ceremony so they were "done up" with their stuff on. They are (were, in 2015,in that group) a baron and a jarl. ("Jarl" like 'yarl" is spelled "earl" in English and these days is pronounced like "erl" but way back was more like yarl... look at it phonetically.)