I'm in the Albuquerque airport, after some confusion and frustration, about to go to the gate for a flight to Los Angeles and a long wait, and then a flight to Sydney and a short wait, and a flight to Gold Coast (the airport nearest Schuyler's house). I'm writing this for my own future reference, mostly. :-)

Some details on what I'm going to be doing for some of the time are here:

I'm also visiting some unschoolers in Cairns, and will definitely put some photos of that here in a week and a half or so.

Word Clouds from Spartali, at Fiverr

I had seen the Fiverr website a while back and thought it was cool, but today I went back and saw a couple of things I wanted!

It's a place for people to sell internet art and services, and the price of most basic things is $5. You can use PayPal.

I got these two: 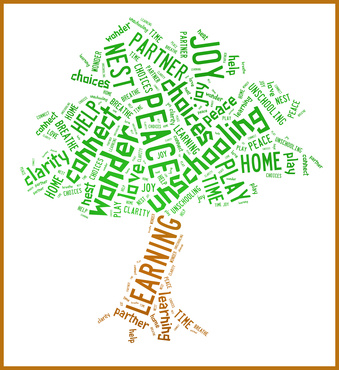 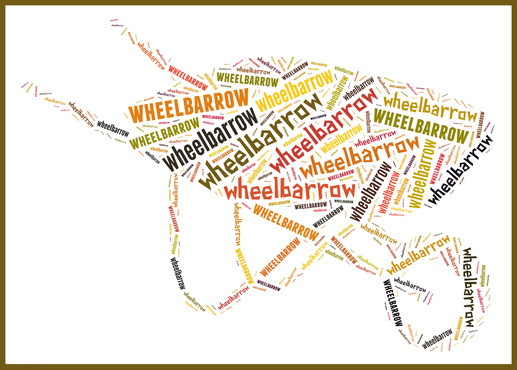 They were made by an engineering student in the UK whose Fiverr name is Spartali. So I don't know if the site is called Three Pounder in the UK or what. :-)

I was sent a postcard in the mail, from Rotterdam (with a note done with an interesting ink I had never seen, on paper with a watermark…). 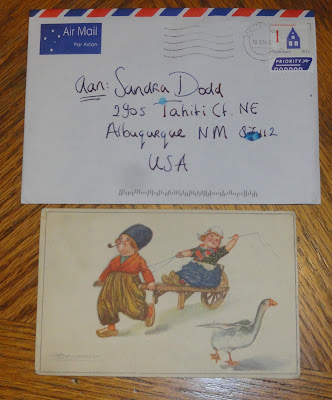 Part of what the note said was "We hope you like this old card.... A small reminder of the Netherlands. It's a postcard from 1924. It was sent to someone in Rotterdam, from the Hague (46 Haag). No message, just the addresses, in pencil.

The stamp was torn, so part of the beautiful postmark was missing, but what I could see said
KON.NED.PO
Vlissingen-G
ROYAL MAIL
Great-Britain-EL or FL, looked like…

The date and town section had more numbers than a date would have, so maybe time. I couldn't read the town, and there were three stars at the bottom of the circle—six-pointed stars. 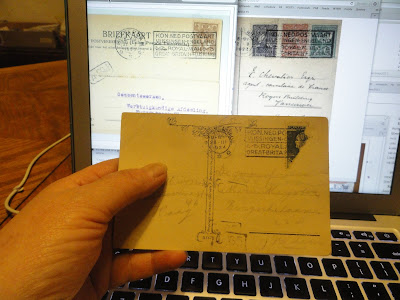 I went to the internet and started searching for information about the postmark.

I found several examples on sites selling (but not discussing) post cards and postmarks. Some showed a town, but it was not mine. Some showed the stars. Some were clearer on the long box at the right. 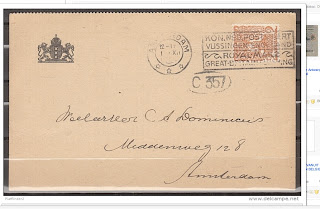 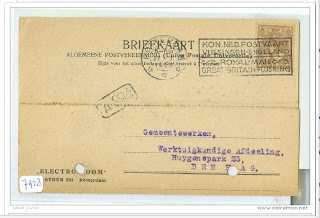 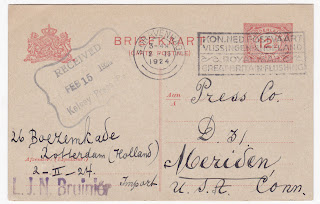 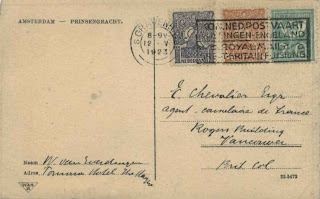 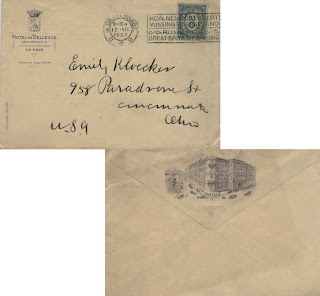 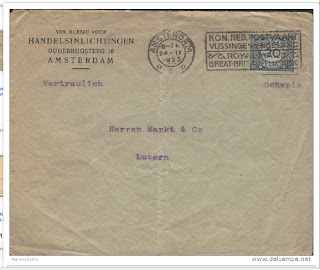 One town I couldn't read, two said Amsterdam, and two were clearer versions of mine: S GRAVENHAGE. If you click any of the images, you can look at them all more closely.

Most of the post marks I saw were round, or small rectangles. Those like this one were all the same and given the carious bits of clarity, it says

It so happens that the notepaper that came with the card has a circular watermark, with three six-pointed stars on one side of the circle. Is that a symbol of something, a place, of Holland?

Why, in 1923 and 1924, were postcards from these cities stamped with anything about Great Britain?

There are stories here! If anyone comes by who could tell me, I would appreciate tales or links or clues.

Marty's dog Gudrun used to bark at the front door, and we would open and let her lean out and look. She would stand there alert, and when she relaxed, we would say "is it okay?" and she would respond in some positive happy-dog way, and we would close the door.

It's the purpose of dogs to help guard the property, and they need to see what's going on. Sometimes a frenzy of barking is because they are trying to follow their instinct, and their partner people are not enabling them to do that well.

In Kirby's neighborhood in Austin, a yard with a long wooden fence has a dog window in it. Brilliant thinking, and nice workmanship, too. 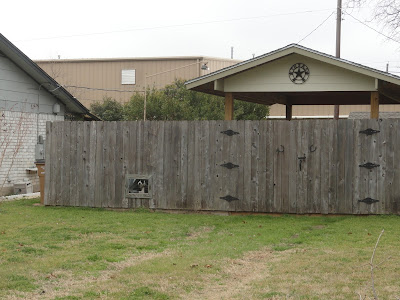 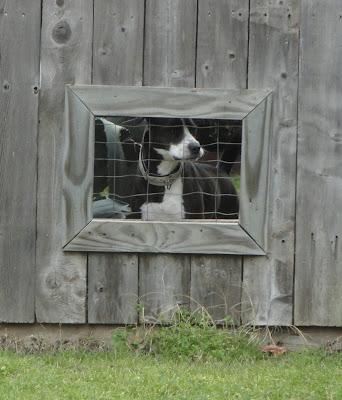 Something of and by my dad is in this Coke commercial

The first building that shows, with icicles, and the next shot, too, are the Stop & Eat drive-in in Española, New Mexico. My dad, Kirby Adams, built that red and white canopy. The shot with the icicles shows some of the structure of the inside. He built the support struts that show there, too—made a jig to bend the steel and welded it.


My sister and my cousins and I all helped a bit with the on-site assembly, when the building was new. It was in 1964 or so. I helped scrub off the logo/printing off the sheets of corrugated steel that went on the top of the frame he built, with alcohol and rags. And we were holding and handing my dad bolts and supplies. Kid-help. ☺ I think mostly we were hanging out while he was making it.

The owner was so impressed with little girls (8, 9, 11, 12 I think we were) were helping that for a few years after, each Christmas Eve he drove about a mile from there to the little adobe house we lived in, in his big car and would give each of the four of us girls $5, and say Merry Christmas and how impressed he was with our having helped our dad.

Now, 50 years later, it's in a Super Bowl Coca-Cola commercial. Like a polar bear. COOL!

My dad died in 1979 and the canopy is still there. My dad looks very American in these photos, taken in Texas some years before that. Click to go to larger versions and a bit more information.