I don't think it's just my kids, or just unschoolers. I think people who've grown up with computers and smartphones learn in bits, from various sources, much more smoothly than older people do. They know there are websites. They know their friends know things.

This image from Harvest Moon, taken by Holly for her own reasons, and left in a folder she said I could mine for Just Add Light and Stir is an example of a game that helps kids learn logic and efficiency, and reminds them to ask around.

Bonny Moss made this video while these kids (all young adults at that time, the youngest 21) were posing for photos. I'm glad there's a video of their posing. :-) Thanks, Bonny!

I'm backdating this to Valentine's Day so it won't show up after the video of the Dodd/Sorooshian kids. :-)

Renee Cabatic's cat coughed up a heart-shaped hairball. So Sweet! I wanted to save it in the same place as a heart-shaped animal offering I photographed a few years back.

Notes, from something on facebook, where I had suggested a positive attitude, rather than a "same shit, different day" outlook. There had been a calendar advertised with the same turd photo for every month.

Someone said her artistic instinct was to have a fresh (as it were) turd every day, if she were making the calendar. I wrote:

But philosophically, then, you couldn't say "same old shit." It would be new and different shit. Cheerier, I suppose, as such things go.

Sometimes it's special, though. Remarkable shit. I was staying in my own room, with my own bathroom, with a shower, 13th floor, Bangalore, during Diwali--fireworks for HOURS every night (way more sound than light). Because the marble-floored terrace/balcony outside my door had plexiglass guards and not just open ironwork, I had the puppy with me. She was afraid of the fireworks, but had also done enough damage to the floors in this very nice, big apartment where I was. FINALLY, the third morning, she went where she was supposed to! It was sweet, it was charming, it was... 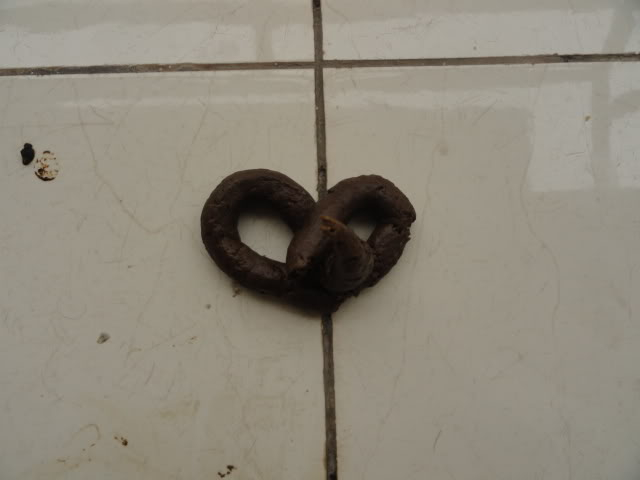 If you make a turd-a-day calendar, a SCATological year... you have my permission to use this one. Maybe February 14th.

This is one of the funniest things I saw last year. I wanted to keep it where I could find it easily. Most of what's out there is just a snippet or edited down.
Posted by Sandra Dodd at 2/09/2013 No comments: