The first post was by Deb Lewis, and was about spirituality and children. There have been nearly 70,000 posts, most of them really solidly about unschooling, and some of them complaining about me wanting the discussion to be so seriously on topic.

There are over 3,000 members (Yahoo says nearly 4,000, but I know some of them have forgotten they joined, so I round down). It makes the world a better place for some people, and maybe that's the only way to make the world better for lots more people. 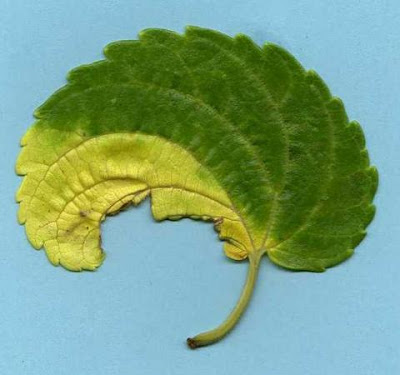 I'm grateful to those who have been in that discussion for eleven whole years, and to those who found it later and understood and helped us.

This is the image I put there, when yahoogroups allowed for an image. It was a leaf that fell off the fruitless mulberry that's right outside our room, and my office. It grew funny, and I thought it was interesting, so I throw it on the scanner with a piece of paper over it, and that was the page's image.

Later someone said he thought it was there because it looked like a brain. I hadn't see it that way until he mentioned it. I had seen interesting imperfection, and a swirliness. I suppose other people made different associations with it, and some probalby thought "a leaf."

It's the season of Thanksgiving. I'm grateful that yahoo created a tool that Joyce, Pam and I could use to maintain unschooling discussions. I'm glad for Deb Lewis and others whose thoughts are lofty and deep all at once. :-) There is an abundance of generosity there on that discussion.

Last Saturday morning he rode in the Veteran's Day parade in Alamogordo. Keith delivered him to the parade starting point, and said he thinks he was the oldest living veteran in Alamogordo. During WWII, Ken was a Navy reconn pilot in the Pacific. Before and after, he trained pilots in Florida. For many years while Keith was growing up, he was the range controller at White Sands Missile Range.

Here's a photo Holly took of her grandfather last Spring, and her caption: 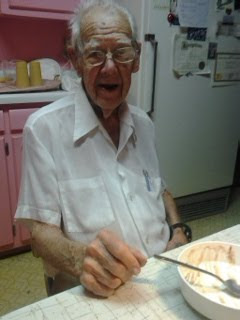 Smiling and chatting over a nighttime snack

I'm glad Keith got to be with his dad this last weekend. When Holly spoke with Keith Saturday afternoon, the parade had been a success and they were planning to go up to Barbara's place in La Luz to see a garage Gerry built, and then go to church Sunday, and Keith would come home.

When Keith got home late Sunday, there were stories of a fall up at Gerry and Barb's, with seven hours in the emergency room, and then an EMT visit and transport after he fell in the dining room at the house sometime during the night. He had broken his hip. In preparation for a scheduled Thursday surgery, they took him off his blood thinners, his blood count was low, and they gave him a transfusion. The new thicker blood didn't agree with his heart problem.

Although he died at 4:00 a.m, we didn't know until evening because they called his house in Alamogordo and left a message. Gerry went by there after work and heard the answering machine message to call the hospital. Gerry went to the hospital, talked to people and then called Keith with the information. Marty and Holly and I were all here and Keith told us all what he knew. I called Kirby, who was out to dinner in Austin, with Sarah and Rebecca Tynker.

Came back March 20, 2017. Marty is looking at some family history for a geography-class project. I've come to quote the obituary that was in the Almogordo paper, in case the webpage disappears.

Kendall Sherman Dodd, 96, passed away from heart failure on Nov. 14, 2012 in Alamogordo. He was born in 1916 in Massachusetts to Sherman W. and Ella G. Dodd. He graduated from Fordson High School in Dearborn, Mich. in 1933 and Wayne State College in 1939 in Detroit, Mich. He was a naval pilot during World War II and a retired naval reservist. He worked as a civil engineer for the city of Dearborn from 1948-59, the Federal Aviation Agency as a air traffic controller in Albuquerque from 1959-1961 and at White Sands Missile Range as a range controller 1961-81. He was a member of First Presbyterian Church in Alamogordo.

He is survived by his sons Gerald Dodd, of Alamogordo and Keith Dodd of Albuquerque; five grandchildren and two great-grandchildren.
He has been cremated and will be buried a the Santa Fe National Cemetery.

Published in Alamogordo Daily News from Dec. 2 to Dec. 6, 2012
original

Words flow out, and Holly as an adult

Sometimes when I don't write here, it's because my life is really busy. And I do write, every day, just not here.

I suppose I will regret, someday, not having everything in one place. It's scattered. There are links here to much of it: SandraDodd.com Once upon a time it was on a user group, my daily writing. Then AOL forums. Then unschooling.com. Then unschooling.info, and yahoogroups. I do write at Always Learning. Sometimes that is quiet, because of Radical Unschooling Info, on facebook. Judging by the list of former hoppin' spots, that won't always be so busy.

Holly is grown. Twenty-one years old, for the past eight days. And in that time she has started a new job (cleaning The Pit, in part, which sounds really terrible, cleaning a pit, unless one knows what pit that is *). She's started babysitting for a family she knows through another friend, too; ironically, one of the things they could use a babysitter for is that they have season tickets for Lobo Basketball games. It's like "The Gift of the Magi", by O. Henry, which is also like how I gave my sister a ball of string (and some other gifts) for Christmas, and she had brought me the cast iron string-ball she had (hanging dispenser for string, though she hadn't known what it was until I told her). At least in that case the two went together well, and I got to keep the string and the iron holder.

Holly's party was the Saturday before her birthday, on October 27, at Amped. Keith and I were there for the first half, serving pizza and punch, but the party continued and Holly seemed happy with it all. It was a great idea she had, to host a music party at her favorite venue.

But kid stuff can be better than adult stuff. Her friend Ryan is in the hospital, in intensive care, and she's been there a fair amount, supporting Will, who has been Ryan's best friend for seven years or more. Ryan recently lost his job when the restaurant he had worked at for a long time closed; he, Will and another friend just rented a house together. Ryan was at Holly's birthday party and is very nice guy.