This was a surprise

Trees without a tree

For a few years we had a kind-of-tree-like arrangement of lights, on a wooden platform that's in our front room (used to be a tiled base for a wood stove, long ago).

We put the gifts inside it.

This year, Holly had an idea to wrap lights around a banister sort of fence on the other side of the room, fastened at a center point on an eye hook. Keith set that up for us. 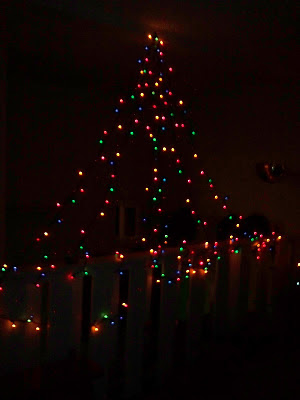 The coolest thing is that we could stick most of the gifts inside the fence, so they show decoratively from the stairs and (also Holly's idea) we put Christmas cards on the outside, so those who enter the house can see the cards and gifts. 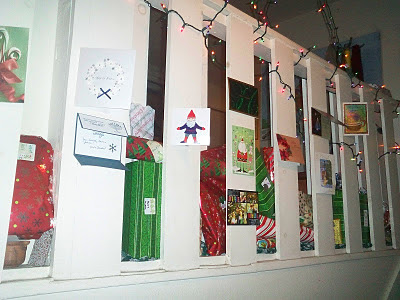 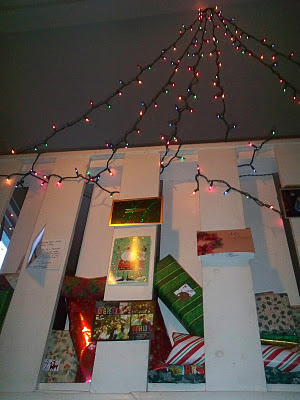 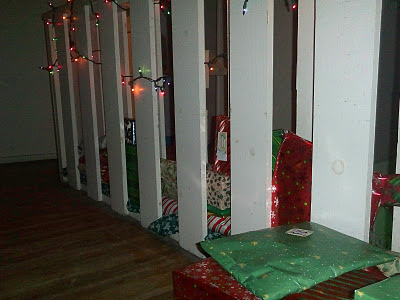 Because I took this with a flash in a dark room, the metallic paper projected its pattern onto the wall above and the hardwood floor below. I didn't plan that. It was a Christmas surprise from my phone's camera. 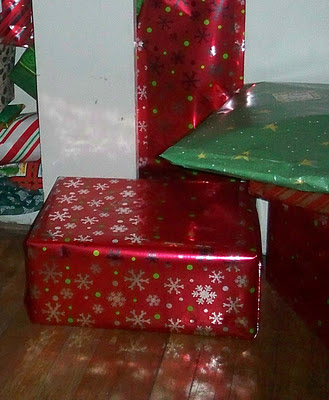 I'm not philosophically opposed to having a Christmas tree, it's just hard to rearrange for one, and every year we seem to be busy with other things (this year, an unschooling symposium starts December 28).

But meanwhile, in another house around here, the mom didn't want a pine-needle-shedding tree anymore, and had for a while had an artificial tree. But it was shedding artificial pine needles, and so she asked her son, who's an artist, to come up with a tree that wasn't a tree. 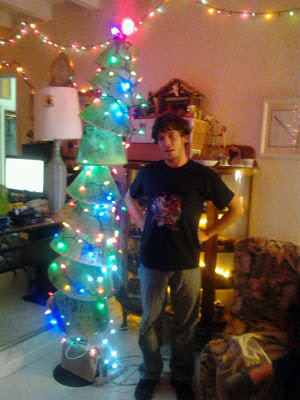 Holly helped a little, around the purchasing thrift-store lamp shades part, at least, and painting, maybe. The artist is her boyfriend, Will.
Posted by Sandra Dodd at 12/24/2011 2 comments:

Recently, somewhere in Texas, I took a photo. It will be the second photo below.

Today on the Shorpy blog, was this photo. If it seems at all interesting, click it. On the large image, you can see details of the little car to the right of the truck at the loading dock. You can see the pigeon on the roof, and the blurred ends of trees, so you can know the wind was blowing lightly when the photo was taken.

The photo I took was of a brick street and a building with a coca-cola sign painted on the side. Some of those old signs have been painted over, and re-appeared, over and over since they were first painted. They're called "ghost signs" and if you go to google image and put that in, you'll see lots that people have collected in photos.

What I like about having seen the Washington DC example above is the people's clothes, and the cars. So I can picture some people around "my" building, though mine would've been Texans so some aspects of the autos and clothes might have been different. 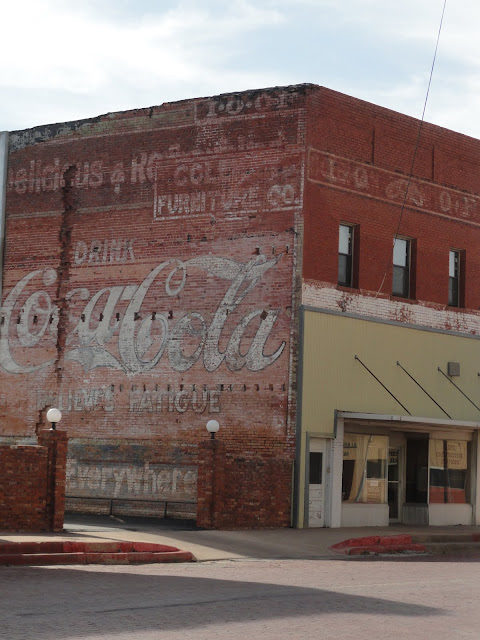 This was in Coleman, the town where Keith and I stopped for hamburgers on the way to Austin on November 19, 2011. Whoever painted that sign probably could not have imagined, nor believed it if we could have told him, that in 2011 someone could take a photo of it with a little pocket-sized digital camera and somehow show it all over the world without ever touching paper or chemicals to develop it. I'm pretty sure whoever painted that sign wouldn't have believed it would still BE there in 2011. :-)

So if you see ghost signs, maybe take a photo and think of the artist, of what it might have looked like the first day when the paint was still wet, and of the ghost cars and people who might have been there 100 years ago.

Here are some I took in Bimidji, Minnesota, when Holly and I visited the Traaseths there in 2007.

We got two cords of wood yesterday. I don't mind advertising the place we got it. They were quick and efficient and it wasn't very expensive, and the guy managed to back into our yard a bit and dump the whole pile on our property! 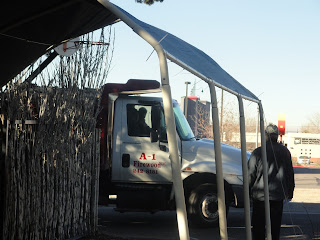 Probably if I owned a dumptruck and a wood yard, this wouldn't be so exciting to me, but I love the sound and the sight and all the cedar dust and the smell.


I would've stayed out longer, but my cellphone was playing music box in my pocket. It was the charge card company asking whether I had charged $7,000 on my card, and then $10,000. No, I hadn't. What about this'n'that other lesser charges? Yes, yes and yes. So... the card needs to be replaced. That's fine. I missed the end of the wood show, but for a good cause.

It made me feel oddly good to know that I could have (potentially) charged $17,000 (a car or some such) and said "yeah, I did that!" when they called, and they would have said, "Okay, then! Just checking." It didn't make me want to do it, but just the thought was fun. :-)

I helped stack until my back hurt, and then came in and made banana pancakes and bacon to reward the others who worked until it was done.

What really makes me feel rich, and always has, is a big pile of wood. So we're temporarily fuel-rich. I'm glad it's luxury (hot tub and fireplace) rather than life-and-death cooking and water-heating necessity. If the electricity or gas go out, though, we won't freeze. 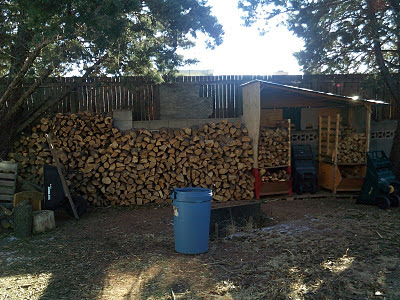 Last night I went with Holly, Alex and Will to "the new Amped" (I don't know how long they will call the new location new before it's just Amped) for acoustic night. People signed up for fifteen minute sets, and we were there from 7:00 (it started right on time; Will went first with a ukelele solo) until 10:45 or so. The last set was half an hour of Reagan Motels, doing acoustic ska. Two guitars, trombone and trumpet, vocals. Sometimes they have one or two other people, Holly says. Usually it's electric guitars and drums, but this was their acoustic night permutation. 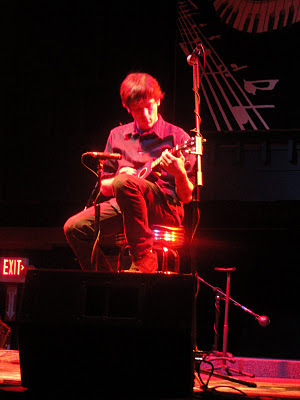 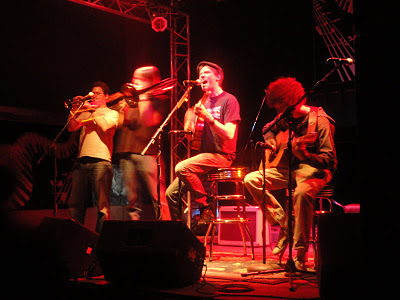 I sang Frankie and Johnny, Johnny be Fair and The Titanic. I think I'll go again. I started a song list in my pocket while I was thinking about it, but the songs were too much the same, that I thought of. Tramp on the Street, Both Sides Now, and Little Rosewood Casket. All too similar in speed and mood. So one or two of those, and something silly, or fast, or both. Maybe in January.

Holly took pictures of me. 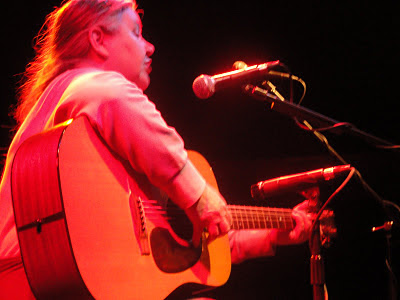 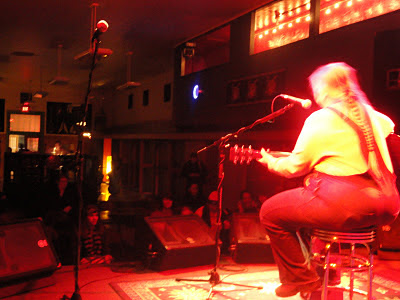 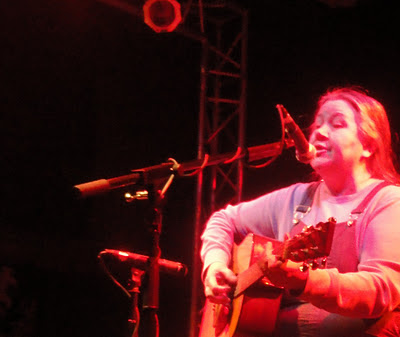 The Virgin Mary in a lightning bolt

Sometimes when people come touristing here, we take them to see this tree, or they find it on their own, or someone shows them. It's behind the rectory of San Felipe de Neri church in Old Town. Someone carved The Virgin of Guadalupe (a local favorite) being supported by an angel, in a dying tree a long time ago, and it's repainted occasionally.

On the news a few days ago, they said it had been struck by lightning, but it might have been wind knocked the top of the tree off. The carving is still okay, they said.

I went looking for an image and found this, which is even more interesting:

Bee Rescue, Cottonwood Madonna and Miracles
A local beekeeper saved a bees nest that blew down with it.

Here's a local news story:
Religious icon OK as wind splits tree
There's a video of the downed tree, with some commentary.
Posted by Sandra Dodd at 12/04/2011 No comments: