Kirby and Destiny at the new house

Kirby is engaged, and some other doings

This is an expansion of something I wrote on Facebook. I realized some of this might need to be referenced in future, perhaps.
__________

Today was calm but busy. Marty and I went to register his Jeep for the next two years and it passed inspection perfectly (for the first time). He's had it for eight year, and still loves it. The last two times, he needed a new gas cap, and sometimes there were other things recommended or required. This was an all-clean emissions test. Then we stopped by to see if Keith wanted to go to lunch with us.

Kirby and Destiny are engaged. I told Marty and Keith at lunch that the custom-made ruby engagement ring had arrived, but it was secret and I didn't know when he was going to propose. Marty called me a few hours later, saying that Ashlee came home saying they were engaged. So Marty knew a special secret for a few hours. Kirby proposed to her in the house they're buying, that is newly painted and being customized, that they just started taking furniture to yesterday. They'll move from our house slowly.

Holly is visiting a friend she's known all her life, Caiti Hankins (and Miles, her guy), in Oregon. Prior to this, Holly visited Renee Cabatic and family, and then Diana and Hayden Jenner. She's in Oregon because she helped Kymberlee/Nevé move up there. I asked Marty today if he knows Nevé and he said he did, and Ashlee had given her some pirate garb.

Keith and I played Dr. Mario, and had some adventures with an elecrician and people from the power company, after which the outdoors light fixture that used to hum and click is gone and sealed, and our whole house has electricity (wind+tree broke one of the lines to our house and three neighbors last night, but it's fixed).

I walked to the store in the dark for snacks to eat while I watch "Twenty Again" (a Korean drama), and am peacefully happy at home. It wasn't too peaceful while I was chocking on pork rinds, but I survived and had a nice little Sprite in an aluminum bottle, or a bottle-shaped can, and I love my house and my family. 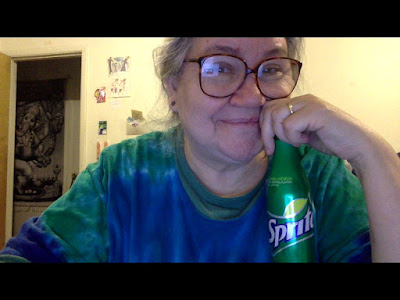