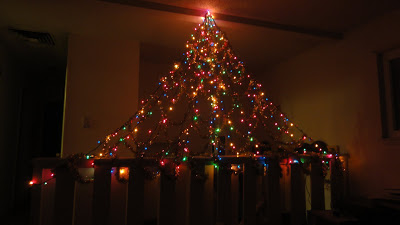 That's this year's permutation of lights-in-the-shape-of-a-tree. It's nine feet wide and 4 inches deep, but it can be seen from the road (if the curtain's open), from the front door and from three rooms.

Last year's, and some before that, and another artsy not-a-tree are here:
Trees without a tree
Lights and Invisible Tree
Christmas Meme, Mimi (shut your mouth, it's Christmas)

Come, let us adore Him 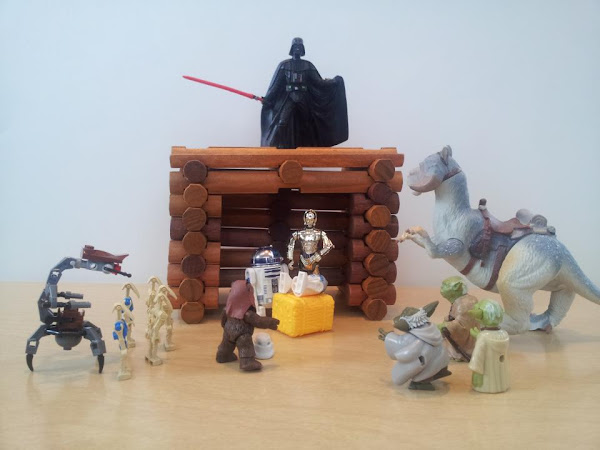 We’ve been snowed and iced in for a couple days, which tends to add all sorts of silliness to our lives :-)

So today, inspired by a snowman-themed nativity set he found in our boxes of Christmas decorations, Robbie decided to build a nativity of his own.

I posted the photo on Facebook but thought I’d share it with you in case you didn’t get to see it there, as it really cracks me up every time I see it. When he decided to use the three yodas I darn near burst giggling :-)

Oh come let us adore Him
With The Force

More about Robbie, his mom, their family, unschooling...

Snow on the hot tub

I was too sleepy to report this last night, but I was putting my hair up to go into the hot tub, when Keith said it sounded like it had just started raining. We grabbed our old bamboo and cotton sunshade umbrella (the kind that goes on a picnic table), and went on out.

It wasn't rain; it was snow. It was the kind of snow that's frozen in the air, and kind of makes a tinkly sound. So we went in, but sat close to tay under the umbrella. The tub wasn't super hot, probalby only 103 or so. Had it been a 108 degree night, probably the umbrella wouldn't have been collecting snow as it was. When we got out to put it together, I was holding the umbrella over Keith, and I shook it trying to get some of the snow off the back, but it went on Keith. That was exciting.

The whole thing was exciting and funny and sweet.

This morning, the places where we we stepped on the deck coming in are icy footprints.

The snow was less than an inch deep, but the timing was fun for us.

How old is this blog!?

I have been writing elsewhere lately, but looking for a photo I saw the blog post when Holly became a teenager. http://sandradodd.blogspot.com/2006/07/three-teens-i-have-three-teens.html

She's been 21 years old for over a month now. She, Kirby and Marty will be all in one place right after Christmas and I'll try to get a photo of them together.

Their teen years zipped by, it seems. It's been over a year since we had the last of our 19-year-old children. I love them.

Cocooning and other stillness

Sometimes I get still. That's good, because sometimes I don't, and can't. If I were that zippy all the time, my body, mind and soul would probably wear out.

I'm in a quieter phase, sleeping more than usual, playing video games, watching "The Mentalist" on DVD, working on my webpage a little bit, and just thinking.

When I was younger and I would change, I thought something was wrong with me. I was under the mistaken impression that personality and mood should be constants. Life is better when I think of those fluctuations as tides, or as the weather of the soul.

(The gif was made here: makeagif.com/i/4u1CYV.)