Holly in a Spoon 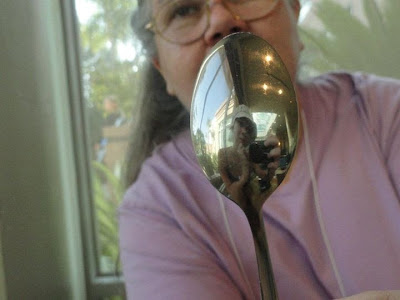 Marta found this on facebook, where I had left a note to add it to my mirror-photos page. I haven't done that yet, but here's a good place to save it.
Posted by Sandra Dodd at 8/27/2013 No comments:

This is so Destiny can find the recipe, and so I can use this and not need to get the book out.

adapted from Applehood & Motherpie, Junior League of Rochester, 1981—a book I got as a wedding gift

I need some photos from this summer.  So I went into my computer bag and pulled out all the notes I had, and flyers and ticket stubs.    About 100 pieces of paper.  Ten or so are in a pile to save, some to laminate.   About 20 are in the trash.  The rest are in four piles.

I don't know exactly what I meant when I wrote


Gerard David
Christ nailed to the cross
(the dog)

but Gerard David is a painter I've mentioned on my website because of a basket he had, and I saw some of his paintings in the National Gallery in London.  Apparently one has a dog I'd like to see again.

On the other side it says

I think I was trying to decide what to have for lunch.

That's something I wanted to show Wendy Neathery-Wise.  Another painting.

By writing this here, I might be able to look them up sometime.  I can throw these bits of paper away.
I might bring images too, later, but right now Kirby's uploading a game and so I'm limited to words.

Yesterday, I was working on webpages and thinking I really did need to put something on my Maslow page, and this morning Jude Murphy had this on her facebook page.  It led back to Brian Millar, who sent it via mobile, so he might've seen it somewhere else.  Both of them live in the UK.

I've known since 2006 that Dayna Martin was using my name for her benefit. I've known since early 2007 that she was dishonest. I warned a few people and went about my business.

Sometimes problems flared up, I wasn't involved, I ignored it and kept doing my own volunteer work, as I have done since before Dayna ever had children, since before she had a husband.

For years I gave her the benefit of the doubt.

Time passed and there were more incidents. Sometimes it seemed that Joe and Dayna were trying to call me out, using my name to compare Dayna to, insulting me to others, making untrue claims (twice resulting in conferences flying their family across oceans, in part, I have heard, because Dayna said it was customary, and people did that for me and my family).

I kept doing what I had always been doing, hoping Dayna would eventually reveal her flaws in public, and others would say "She's dishonest," so that it wouldn't be just me saying it.

That time has come.

When problems with Dayna got so bad that people were willing to share them in public, dozens of others came out, and I began to take notes, to add to the things I had already known. I set up a facebook page called "Clearinghouse, temporary." I didn't make it a closed group. It's like a storefront with big glass windows where anyone can read. I was not being sneaky. I asked questions and people brought answers. I expected accounts of some fraud and some dishonesty, but people brought more, and worse. I plan to use it to set up a timeline with annotations and links, when available. Joe and Dayna delete a great deal of what they write. I will save details and more lengthy accounts in non-public places, in case things flare up again someday. The beginning of my collection, still sketchy as I write this, is here:
http://sandradodd.com/problems/daynamartin/

I began this post on Sunday, July 28. It's nearly the end of the week, and the influx of disparaties, twists, turns and fabrications stuns me. There is much more than I imagined there could possibly be, and the flow of reports hasn't stopped.

I fully expect that there will be a campaign of threats and lies, because that's what Dayna and her husband have delivered to many of their former friends. I am not a former friend; I was wary from the start, when my name was used before I had ever heard of her. But I was also willing to give her a chance to be better and to do better.

This is my reply to an apology, of sorts, from someone surprised both by the revelations about Dayna, and about my responses:

-=-although I'm keen to be a kind and compassionate person to all, some are clearly more deserving of that than others. And sometimes what appears to be bullying, is merely folks trying to protect others from someone who is either devious or who simply is not to be trusted.-=-

When people who want to be fair are taken in by someone like Dayna (or a televangelist, or gang leader) they think they are fighting injustice by being loyal to this poor misunderstood saintly person who has done no wrong, and is being persecuted because others are jealous (or whatever). The problem is, though, the central figure in their club/cult uses all their numbers and influence to cause more havoc, and then thanks them sweetly. Gives them gifts.

I've received several apologies from people who defended Dayna, or covered for her, or who had badmouthed me to please Dayna or Joe.

ok this has gone on long enough. All you mean ass bullying ass woman, mothers, leave my fuckin wife and family alone. You call yourselves advocates for family. Your all evil and cold. Nothing more. (make sure you screen capture that)

My response to that, on the Clearinghouse discussion:

I have endured seven years of plagiarism and lies. He can't endure four or five days of questions and truth?

I'm starting to believe this:

Joe and Dayna are not living life. They are playing life like a game in which other people are pawns, cardboard cutouts, targets and obstacles.

If they were living a rich, unschooling life, they would be home with their children, learning. They would focus in, on their relationships and togetherness, instead of out, to other continents, other years, other people's money, reality tv shows and fame.