This is the name of a lost piece of writing.

In a letter to the editor of a homeschooling newsletter in 1993, I wrote:

You can use the Sad Sandra Truth post. I guess it was a big deal because you're not the only one to have said it's touching and all that, only if I have copy I don't know where it is (mabye in the 3" stack of *Prodigy rsidue, but the things I have looked for there I haven't found), so if you print it I'll get to read it again myself! Was that the one that said I was Pippi Longstocking on drugs? More like Pippi Longstocking with flashbacks!

I'm putting this here so that if and when I find that I can transcribe it and mark this off my checklist.


I remembered the gist and topic of "the sad Sandra Truth." It was that I can't make an elaborate dinner and get all the foods to the table at the same time, and lots of people can. There was more to it, but that was the "truth." It was about capacities and confidence, I think.
December 2019; remembered but didn't yet find
Having found the ten issues of The Back Yard Fence published between summer of 1993 and autumn 1995, I've looked through them all and found nothing about Pippi Longstocking, and nothing beginning with 'the sad Sandra truth.' I did find things worth transcribing, and I plan to link what I do transcribe at SandraDodd.com/early but there might not be anything there yet.

Electronic media isn't forever. Neither is paper.
Posted by Sandra Dodd at 9/23/2018 No comments:

Memories of speaking in England two years ago

These photos wouldn't upload there, so this will be overflow!
I created that post in 2018, but backdated it 2016. The photos are by Janine Davies. She posted them on facebook back then. 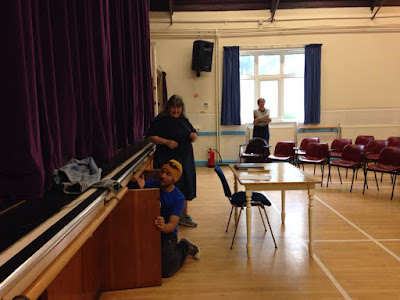 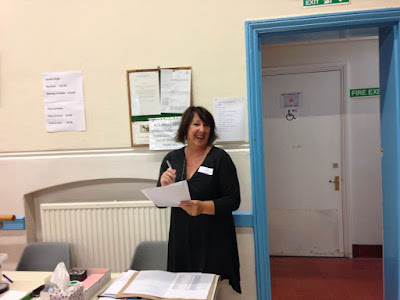 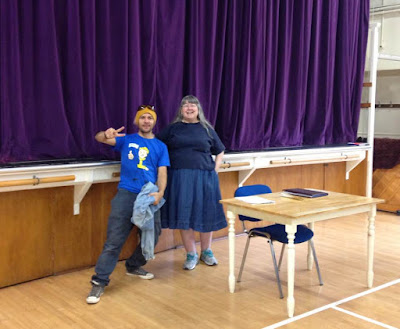 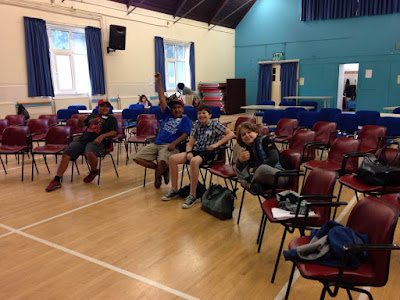 Maybe my computer was just tired, or maybe that post became unwieldy, but there are 20 more photos if you click here! and notes, too. Credits. Memories.

What's above makes it look like there weren't many there, but this was during set-up. The front-row (whole audience) there are children of organizers and long-distance friends who came early to help set up.

Sandra, there are exactly 7767 files on your file manager and it includes all the HTML pages, images and all media files.

There are approx 5547 HTML pages on your website which are available on your file manager.

This morning I woke up to a newly-designed interface, for file creation and editing. "New improved" has not sounded good to me for a long time.

I am assured that my concerns will be passed on to the developers. In the meantime, I'm sorry to those who use my pages and now will see little diamonds with question marks in them, and odd series of characters where other normal keyboard symbols ought to be.

I told my helpful helper, even when I thought I had around 3,000 pages, that I was 65 and would not live long enough to go through and change every keyboard symbol to ascii code. Every — to &mdash; ? On 5,547 pages?

And "page" in most minds (mine, used to be) is like one side of a piece of paper, with 300 words or fewer. No, many of these webpages would print out to 10 or 20 "pages" (or more) in that old sense. These pages can be chapters. Books.

I'm too afraid to even peek at the pages in Spanish or French. I sure hope they can fix it.


Something new and cheery! A new blog to collect photos of zia symbols (the design on the New Mexico state flag) and photos of pickups (especially back-yard pickups).
Zias and Pickups (ziathings.blogspot.com)
And the older but also still busy and pretty
Wheelbarrows(wheelbarrowthing.blogspot.com) 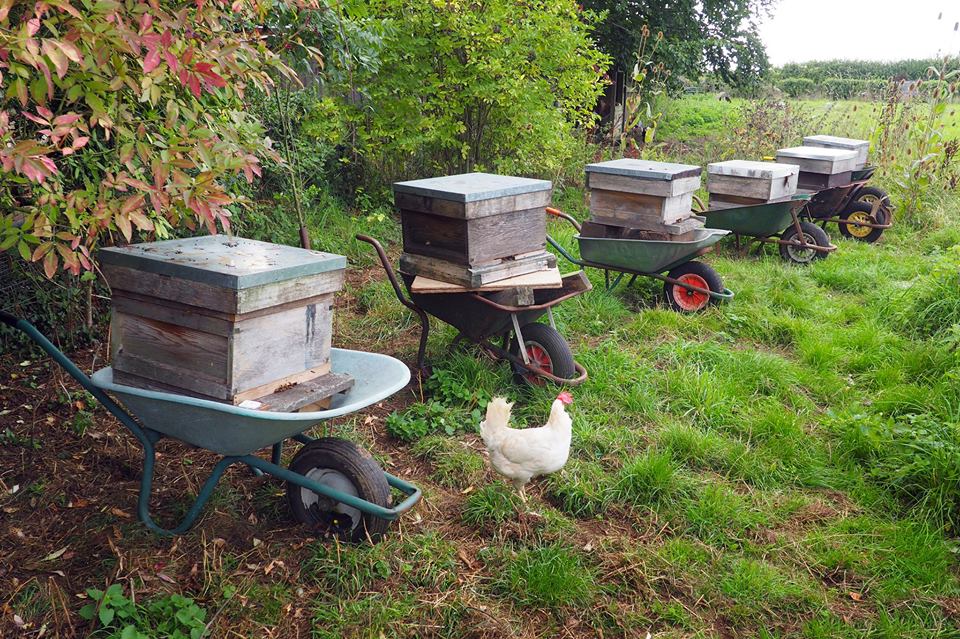 Serenata Tapatia was a music show on Channel 7 (KOAT). I was on, once. The first time I was ever on TV. I watched later. It was awkward. I was playing guitar, Mr. Felix was playing something. Conga? Bongos? We were backup for a singer from our town. But she started in the wrong key and couldn't recover, and unfortunately, what the editor picked up and showed, instead of editing out, was me and Mr. Felix wincing and shrugging at each other about not being able to fix it. That would've been 1968, I think. Same year the Oñate Fiesta was started, or maybe the year before.

Mr. Felix drove us to Albuquerque, and I saw Dick Knipfing in person. He was TALL, and moved the way actors move when they're playing Abraham Lincoln. Or maybe the way giraffes move when they're trying to be cool and casual. He had nothing to do with that show, but he was a newscaster at the same station, and he was leaving as we were coming in.

For years I wondered what the name of the theme song was. I asked a few people, over the years. I would hum some and they would shrug, or I would ask if they remembered the show. Then once in frustration, after about 40 years of wondering, I called someone who had advertised to perform music for weddings and dances and such and I hummed it and asked my question and he said "It's just a polka."

He didn't think it had a name, or he didn't know it, and didn't care.

Sheesh. Every tune has a name. Some have lots of names.

Time passed. I was at Papa Felipe's, a restaurant, and the same recording, even came on their sound system. I asked Siri and got "Jesusita en Chihuahua." Well then! I could look it up.

I don't know who the dancers are or when and where. But this is the song.

There was another show on KOB / Channel 4, called The Val de la O show, which also had music, but also interviews and messing around, and I didn't understand what they were saying so it was more boring, but Serenata Tapatia was music, music, music. Or maybe I just remember it that way. I was a kid, and watched a lot of TV.

OTHER TV WITH MUSIC:
K Circle B with Dick Bills (local)
Friendly Giant (with recorder music, not local)
Captain Kangaroo (not local, I still know a couple of the songs)
Mickey Mouse ("Tuesday is guest star day---" and "Come to the talent rodeo!")

We have planned and planted, but it's fun when plants do what they want to do. When people leave town, or have surgery, or are distracted, the yard can get creative, and beautiful. 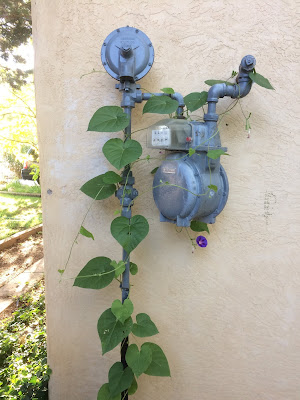 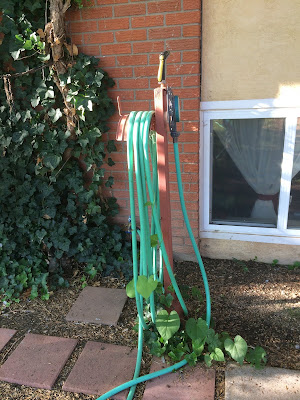 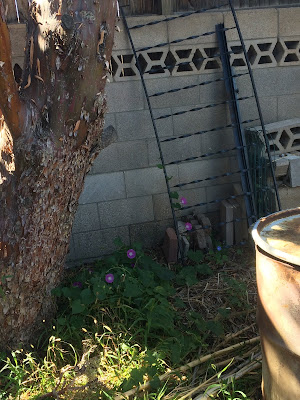 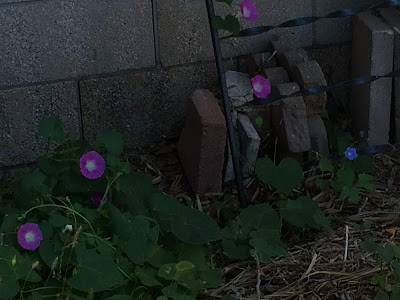 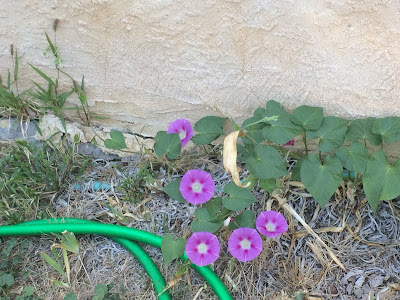 On September 4, all the numbers lined up. They're still all 9's for a few more days. 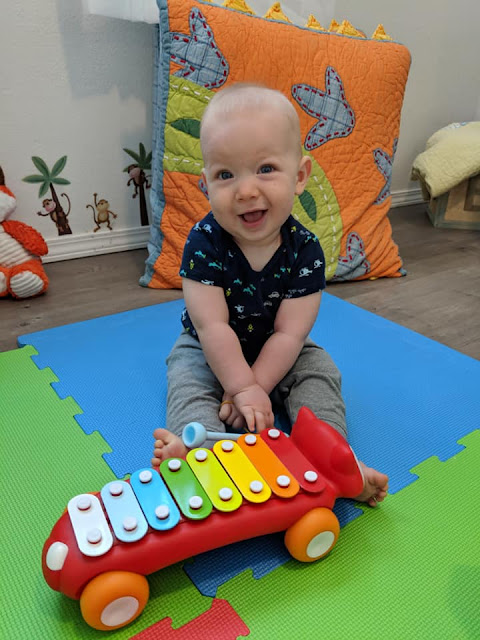 I want to start another blog. I already have several, for particular uses, and have some that were temporary, to document visits to other countries, or to serve as websites for conferences I put on here, a couple of which were glorified visits from out-of-country guests, for whom I organized some activities with other unschoolers. Those.... I like them. I used them, but now they're archives. I'll link some of those below, partly for my own benefit.

The new collection, I'm thinking, will be about zias and pickup trucks, in New Mexico. Photos of zia symbols, worked artistically one way or another, and of pickups, mostly those parked longterm in people's yards. Many pickups live as a sort of yard art, quietly, and peacefully. Some kind of still run, or are used occasionally. Some await restoration. Some are beyond all that. P.S. on September 14: Named it after all, "zia things" (as in ">ziathings.blogspot.com).

Naming the blog seems important to me. It probably seems more important than it is. In poking around blogger I find some names "in use" that aren't, really.

Thalia used zia.blogspot.com, and saved one photo of some English practice, at "ingles basico 3" thus tying up the use of "zia."

But "pickup" would be easy to remember! pickup.blogspot.com would be perfect, except in 2004, "sauce" created that blog, and never posted a thing. Bummer.

The word in local Spanish for pickup is "troca," but that's taken. In 2005, four posts in the same month, by someone in Spain, where they call a pick-up a camioneta. I guess they think "troca" is funny. (Is “Camioneta” Really More Correct Than “Troca”?)

I called my wheelbarrow blog "wheelbarrowThings." I suppose I should go with ziaThings.

Brie and Jonathan are going to help me spot and collect zia art and pickups. But first, I need to finish another project, so because I want to play with the zia collection, I'm more irritated with "the other project."