Keith's progress is remarkable, so here I am to remark. :-)

This week, he has been out of the hospital as long as he was in. And Wednesday's out-patient physical therapy was the last of the set of ten. He doesn't need to go back.

In June, I might start driving him to the pool weekday mornings early. He will daytrip to Outlandish with Paul/Lavan, before then. 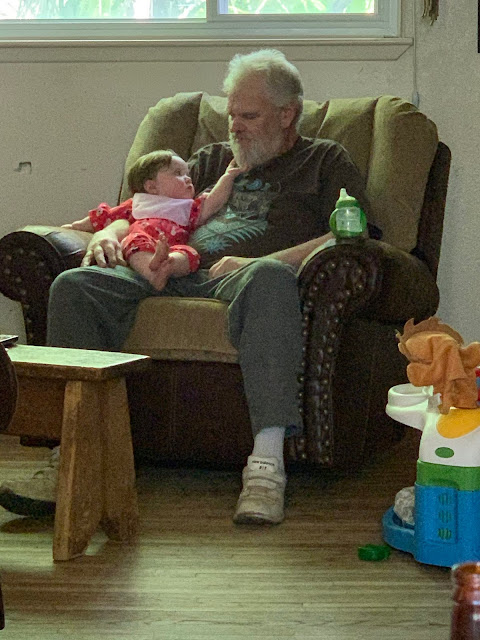 Keith is doing well, using a cane sometimes, probably won't re-up for another set of physical and occupational out-patient therapy sessions, even if they're offered.

He's been to another cardiologist (one of DaVita's) who wants to do some tests over the next month or two, and he went to a kidney specialist, at the request of his "primary physician." The primary physician he has seen twice is a nurse practitioner who saw him because he regular nurse practitioner was too heavily scheduled. He also had another consult with the pharmacist, who rearranged his drug-taking schedule a bit.

The cardiologist asked him to stop taking the blood pressure lowering med, because Keith was in there in the clinic, and reading 80 over I forget what—too low. But to Keith's request to stop taking the blood thinner for a week so the pain clinic would give him a steroid cocktail shot for his lower back pain, the doctor said it was too dangerous in the first six months. Oh, and the kidney specialist told him not to take over-the-counter pain killers for it, because they're bad for his liver.

When he was in the hospital, it seemed too many departments were pulling him one way and another without regard for what the others needed/wanted/had ordered. Now that he's home, UNM and Davita, and their various departments, are doing a similar scattery stretch on him. After this current round of tests and visits, I think I'll contact the insurance company to ask for some coordination of care.

That's what I thought this morning, and told Keith, too.

Then the mail came. These were probably mailed on May-last-Friday, May 3. That would've been two months after the initial cardiac arrest. Do you think they wait two months to be polite? Or did it take them this long to get this together? The only bill we've had so far was the ambulance. Thirty-seven envelopes saying "Physician's statement" have all arrived at once. They might not be bills, and we might not need to pay them if they are (someone we went to said Keith's deductible has been met for the year), but it's a scary-looking pile. :-) 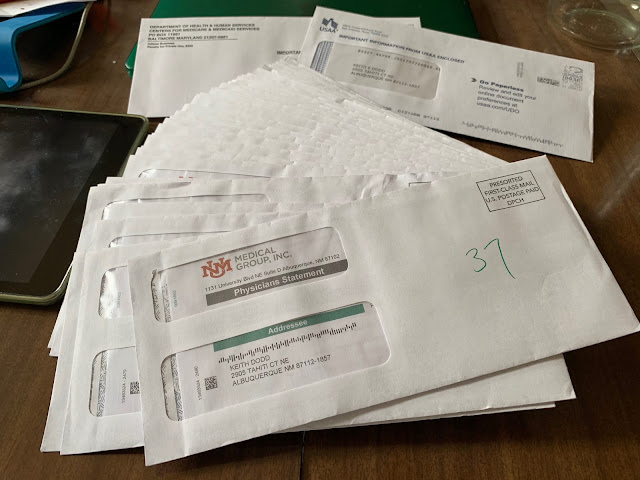 I've been opening them as the photo loaded, and yeah... bills.

Still... it's good that Keith is alive to pay these. :-) Or at least to ask the insurance company which ones he should be paying. It might be the total of this pile that makes his deductible.

Thanks again for the sympathy and encouragement of friends and relatives. Keith's still frustrated, gets tired easily, and sometimes doesn't feel great, but other times he's strong, cheerful and whole!
Posted by Sandra Dodd at 5/06/2019 No comments: