Process or product; practicality or art

When I was eighteen, I took a pottery class at the Student Union Building at the University of New Mexico. As such things go, for beginners, we did pinch pot, slab, coil pot and learned to use the potter's wheel. I was more interested in the glazes than in the clay. We were working in stoneware, and lesser glazes would burn right off.

For my coil pot, I made a regular flower pot, and played with how to make a hole in the middle of the slab/base. I liked the hole I settled on. I pulled little trenches down toward it with my finger, before I started putting the coils on.

Before that lesson, I had made a stamp, to put a design on it with. That was a pinch/slab combo. I carved a design and put a handle on it. The handle fit my hand. I thought I could make cookies with it, too. 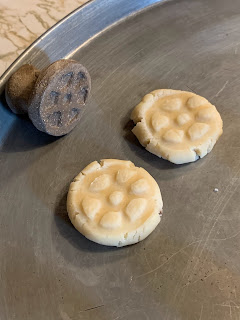 So my stamp had been fired, my base had its hand-designed drainage set-up, and I put the coils on, stamped my design, and left it for its first firing.

When I came back, and was putting glaze on, the teacher came to talk to me. I was just glazing, clear glaze, even though I had asked all those questions. The pot wasn't creative or imaginative enough [for her to feel like an inspiring teacher]. She said the first part, and I figured out the second part.

We weren't being graded; it wasn't even for credit. She got paid, and maybe got art-department credit, for offering a night class people could freely sign up for. I felt successful because I did all her units, learned all her terminology, used all her tools, felt the clay in all its stages, watched several other people doing their pieces, and created a useable, functional, home-made flower pot.

I "failed" for not being creative (in the teacher's judgment).
I succeeded, though, because fifty years later, I still have that pot. It has had a dozen or more different plants in it over the years, has never sat empty, and has not cracked.

The title of the post is misleading; I know that. Maybe I'm more of a process person than product, but the product AND the process were, for me, were this: 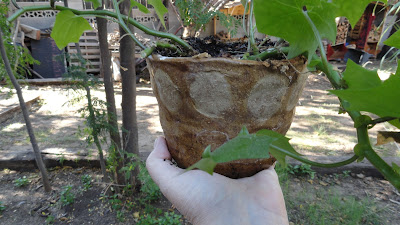 In 2021, this pot was so full of reproducing succulent that I was afraid it might be broken before it could be 50 years old. 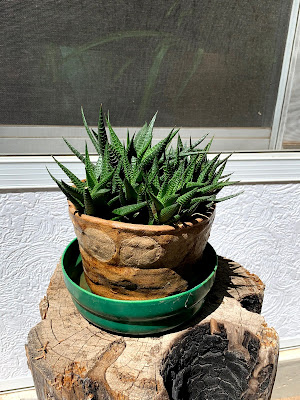 Now it only has the largest of those. 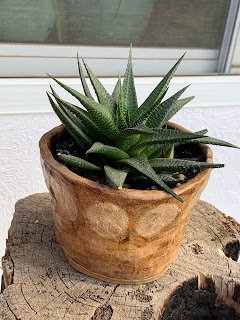 It was February 17, 1972 when I scratched my name into the bottom of the pot and tried out the stoneware stamp I had made. 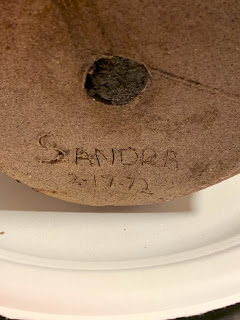