Pixie Lily and the zombies

This morning during the chat, I showed myself my lily, which bloomed today. Holly, who worked at a flower shop for a while, came by later and just unceremoniously stripped it of its reproductive stuff... all the pollen, and she flicked it into the trash. I was shocked! That was part of the color! She felt bad. It's not like this lily had any other lilies to reproduce with, and Holly did it so it wouldn't make a mess.

I'm nearly over the trauma now.
Posted by Sandra Dodd at 1:40 PM 4 comments: 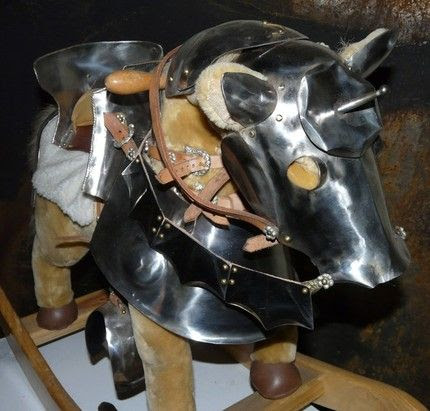 I don't know the artist, but thought it was worth sharing. There are other photos there (and will be unless/until it sells; the image is linked to the Etsy page).
Posted by Sandra Dodd at 5:44 AM 1 comment:

All thing that warm my heart on a cold January night! 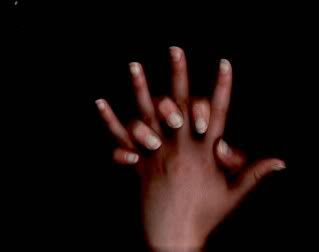 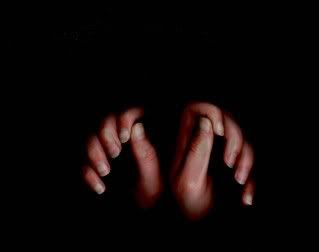 Posted by Sandra Dodd at 9:18 PM No comments:

I dreamed I missed a piece of wood and hit my thumb with the hatchet, but didn't really hurt it. Didn't cut it, didn't break the skin.

I woke up and wiggled my thumb and it had been asleep. My whole hand was asleep. Good info.

Next dream: I slipped on one of the stairs going down to the front door. I recovered and didn't fall.

Once I did slip there, carrying boxes. Landed in a heap, afraid to get up. Real life. All three of my kids were there, in the room. Kirby was maybe 13; they called Keith. I didn't get up for a while.

I dreamed I went to the university, but UNM was portrayed by a former college in Denver with all the buildings stuck together. In the dream, I left my shoes in a classroom, and went back later to get them. In the same dream, I lost my laptop. It was later found, but I wasn't reunited with it before the dream ended.

Sometimes I like dreams. This batch matched, so that should be considered potentially significant as a subconscious mood or need-to-know, but they weren't fun to be in the midst of.

Oh. Remembered another one. Had signed up for three or four classes. Didn't print out my schedule. Hadn't been to classes for a week and a half or two. Didn't have my laptop to check. Ashlee told me the other day what a semester of tuition at UNM is. YIKES! I was totally wasting money. (It was way up from the $310 for as many hours as you wanted, when I was first there in 1970-71.) 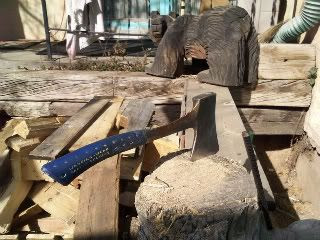 Stuff in the yard, plus snow:

Posted by Sandra Dodd at 2:43 PM No comments:

The Privilege of Age

My kids are self-sufficient, mostly, and so I can take NyQuill and sleep really late sometimes. When I had babies I couldn't take anything like that. I couldn't take Dramamine for airplanes. I had to be awake and alert, and nurse babies on a moment's nudging in the middle of the night. It wasn't okay to tell a four year old "Sorry, I'm too doped up to come and help you."

With the oldest nearly twenty-four, I can really, truly, zone out.

This was a good week for that. I'm surprised I haven't posted in six days. After a December of daily posts, and feeling that I've done nearly nothing but be online this week, There sits, below this, some photos put up last Saturday.

Everyone at our house has a cold. Not fevery, frightening swine flu like last year. Not achy, sicky flu. Just plain-old colds. The kind where you get well every single day, and snotty again every single night. But there's something nice about it, this week. Nobody had to miss work or an appointment. Nobody was so sick that another person needed to nurse them through. Just hoiky and snotty at night. The house is warm, the roof doesn't leak, and we have lots of tissue. We have pillows and blankets. There's nothing to cry about at our house this season.

I shouldn't post without a photo. Because it seemed so ominously stormy yesterday (though it only barely snowed and it only got the ground wet, didn't land snowily) I was bringing in wood and keeping the fireplace burning. I went out to put the lawn cart in a dry place, and there sat the cat; same cat I wounded by opening a door onto her paw. Same cat, I later learned, that Keith had backed onto with his boots on the day before. Right where my cart goes. The cat parks itself right where people will be moving. If I didn't know for personal sure that she had dry food, canned food and water, I might feel guilty. 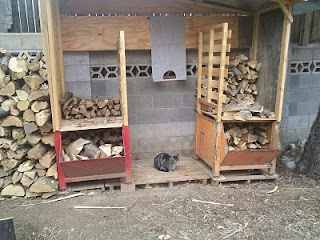 Kirby sent a photo of himself, and at first glance I thought he had cut his hair off, but it was evidence that it's long enough to tie back: 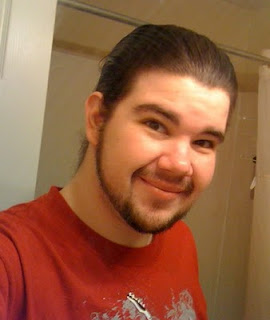 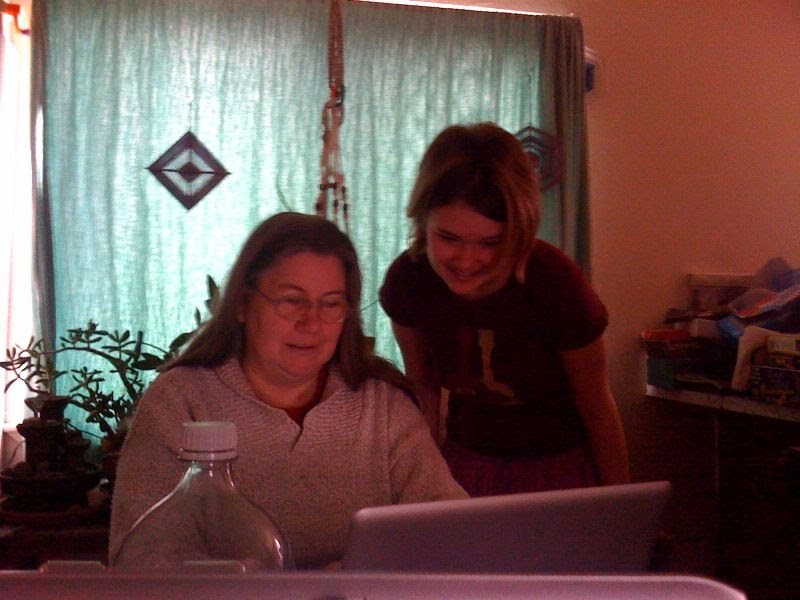 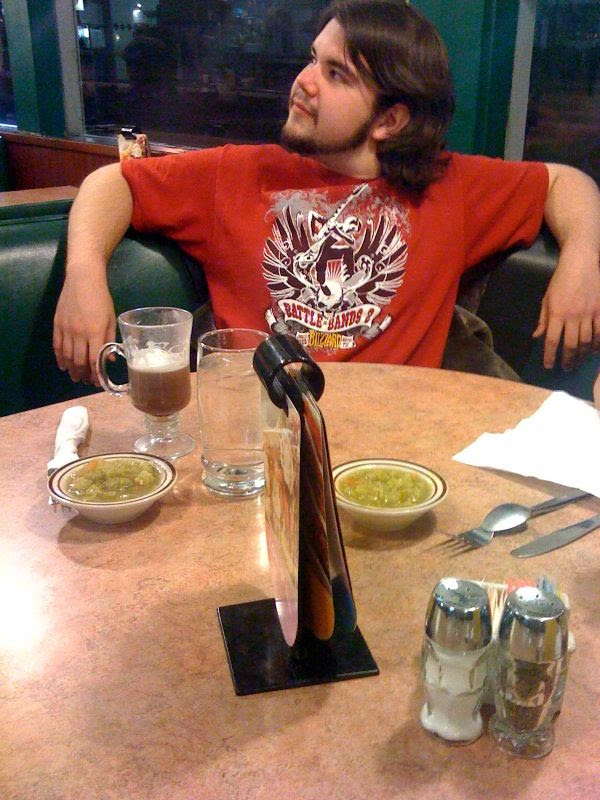 Kirby took the first one, of me and Holly. Holly took the second one at IHop with Kirby's iPhone.
Kirby goes back to Austin soon. Keith and I will drive him to the airport because Marty's in Las Vegas celebrating his 21st birthday, and Holly's at Sophies very-girly birthday party, getting a pedicure, a manicure, and her hair done.
Posted by Sandra Dodd at 11:34 AM No comments: 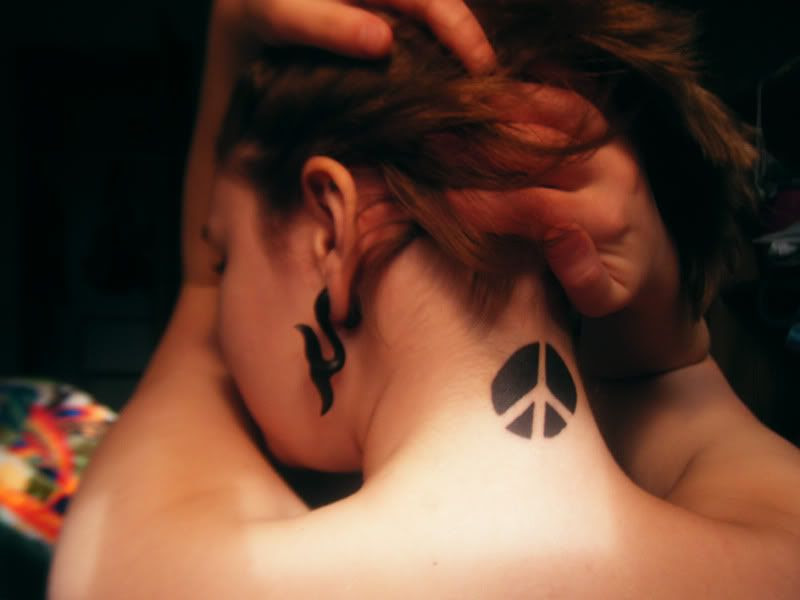 Holly's art, tattoo by the drummer of a band she likes. More on that David Bowie letter

So I had one British newspaper already and it had this on it:

David Bowie sent that one to me, and I've scanned it: sandradodd.com/bowieletter/ChelseaNews

Then a week ago there were some other newspaper articles, and I might've told you sooner, but I was busy, then tired, then kids kept having birthdays! You can click them for better-sized images, perhaps. 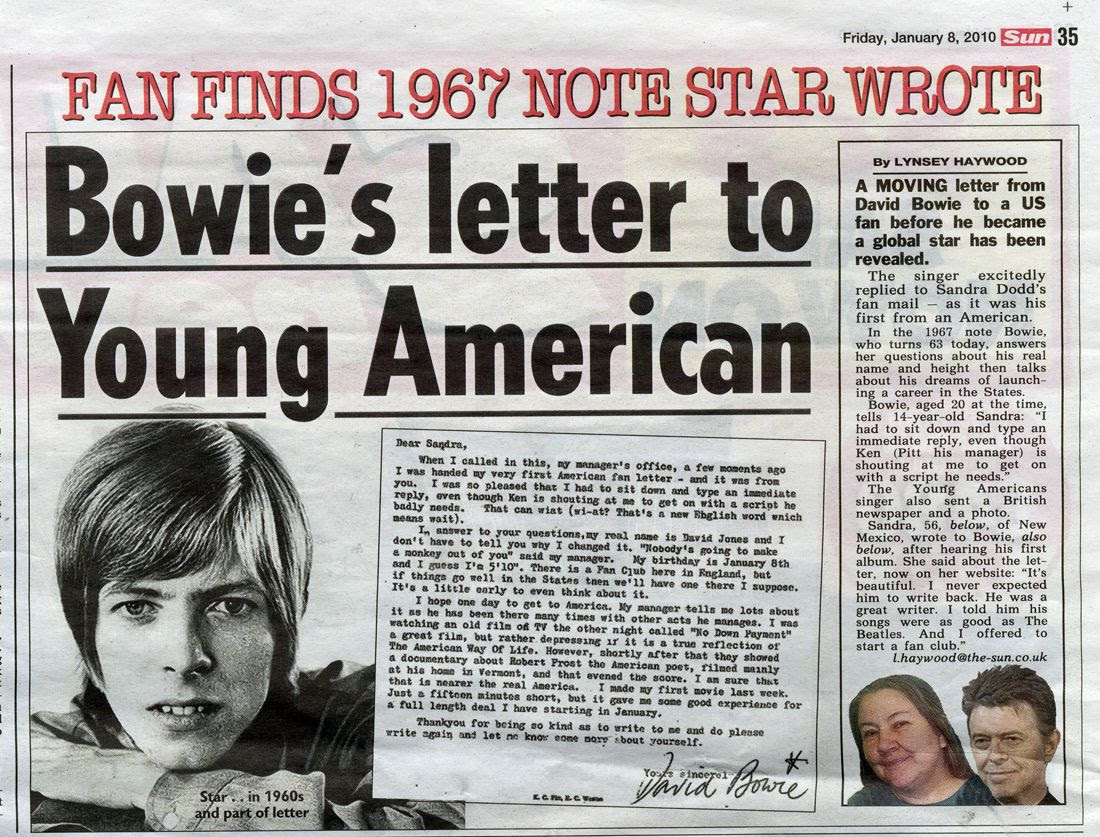 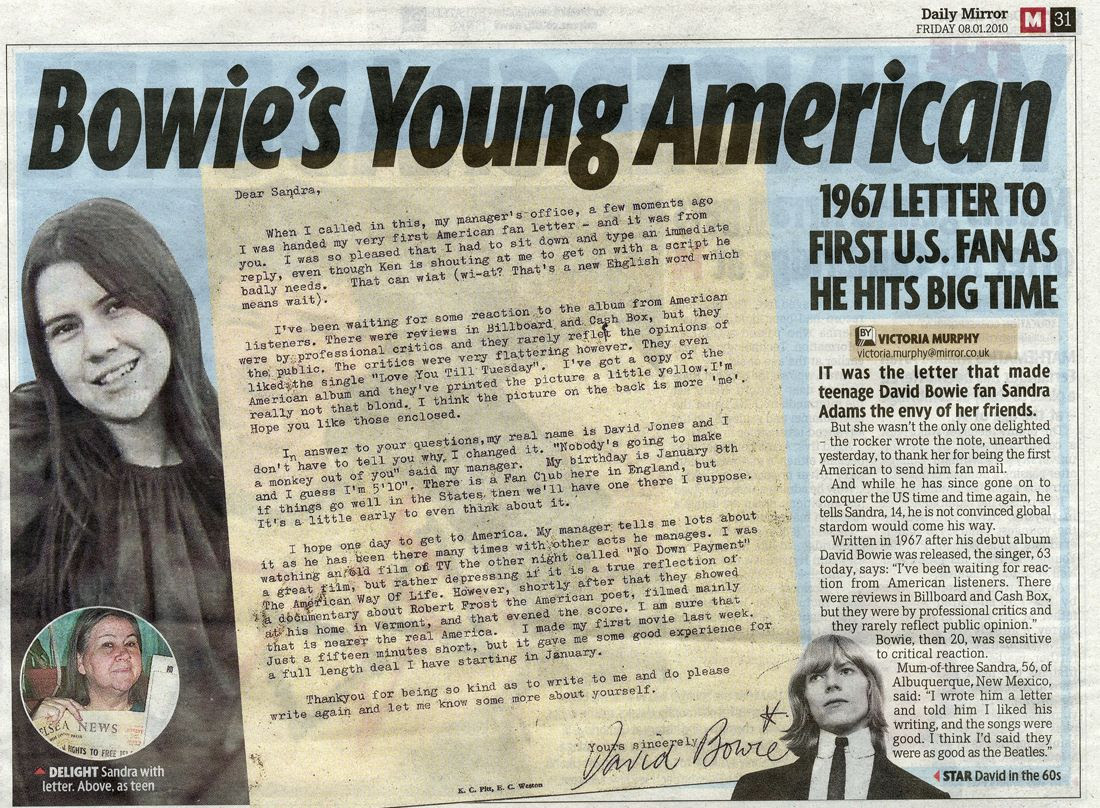 And some online articles:

I'm collecting links and accounts in one place now, and am still working on it, but it's here: Bowie Letter
Posted by Sandra Dodd at 7:57 AM 5 comments:

I had lost what I had written to go with this post, but have found it, Thursday night, after Marty and Ashlee and friends are already in Las Vegas.

From my own point of view (this being my own blog) a tender, sweet baby survived to become a tall, strong man. I still remember how it felt to hold that baby Marty, how bright he always was, and funny, and considerate. 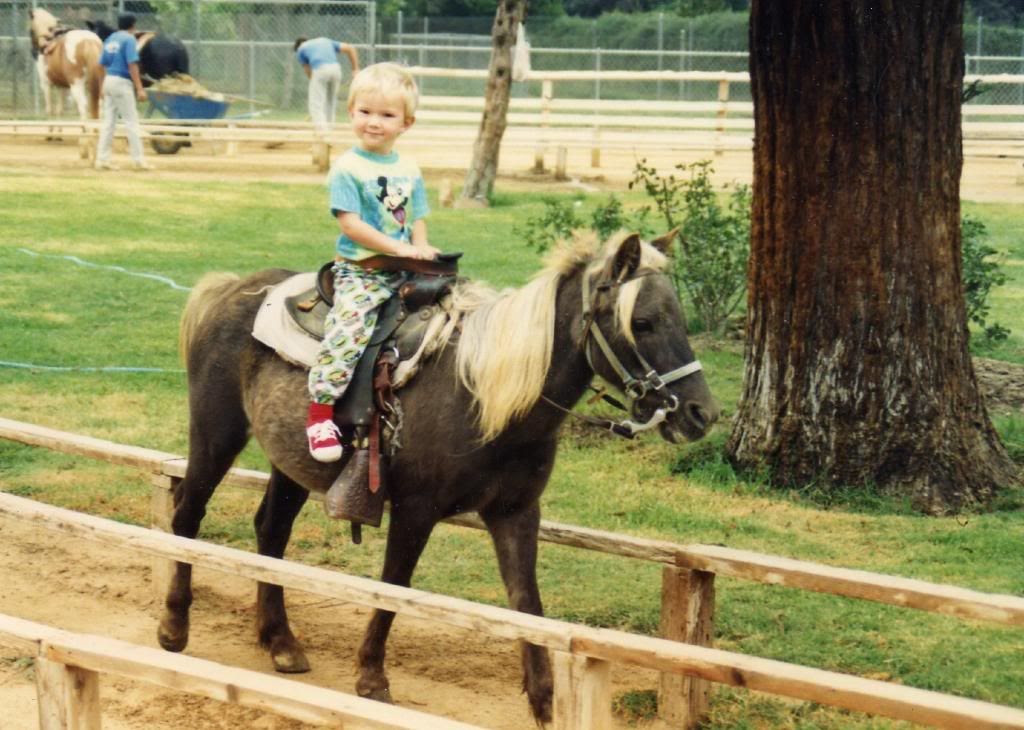 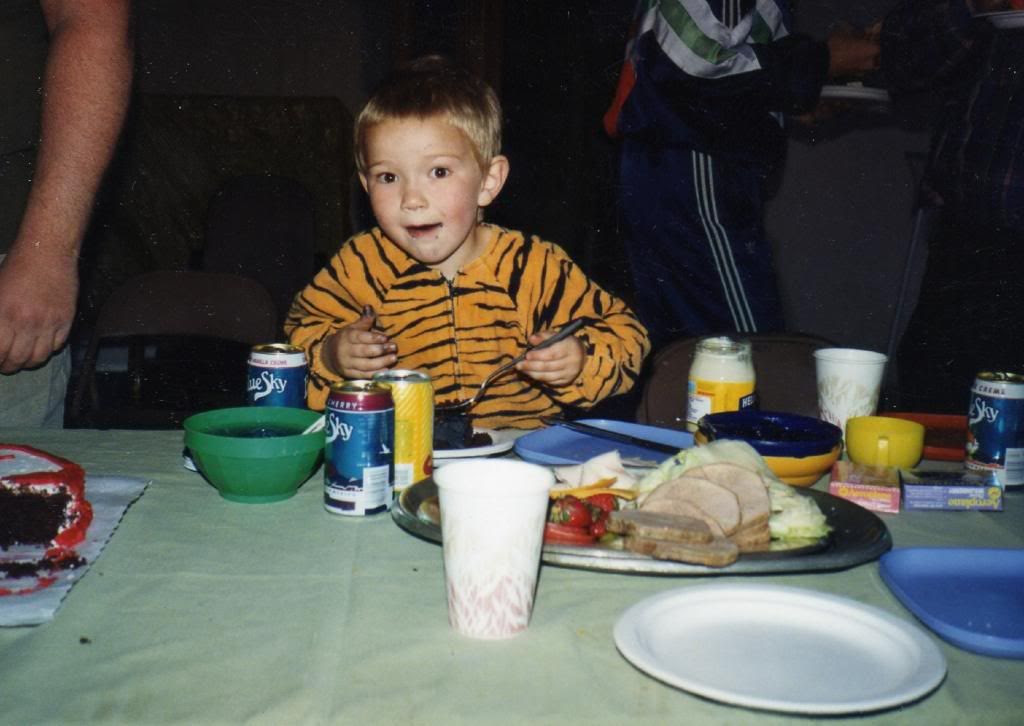 The painting behind is of me, Kirby and Marty, sitting in a meadow east of Taos, when Marty was a baby. It was taken Wednesday night, his last night of being 20 years old: 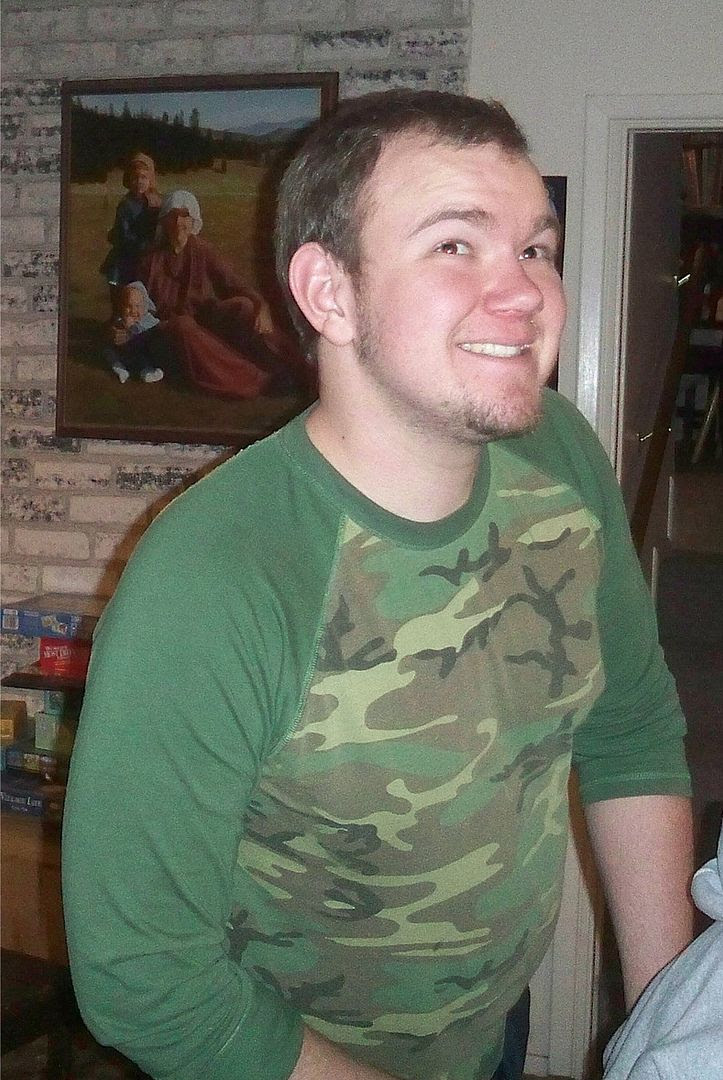 This afternoon Marty, Ashlee and three other friends are going to Las Vegas, Nevada for three or four days, to celebrate his birthday.
Posted by Sandra Dodd at 4:00 AM 4 comments:

born this morning, in Los Lunas, New Mexico, to Lauren Stranahan. His dad, Lee, sent the photo by e-mail. Yesterday was the due date. He's a considerate, punctual guy, this new Van Stranahan!

Sophie McNeill was at SUSS this last week, and today is her 7th birthday. She was born in England.

Here's a photo of her and Holly, at a wedding in France, in 2005 when they hosted a Holly-visit. 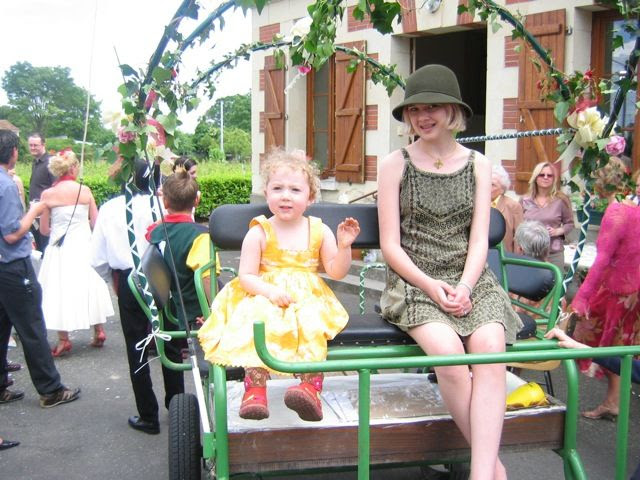 I'm feeling quite thankful that my kids have known a life of schedules of their own choosing and not one that revolves around school schedules and other arbitrary rules. We all know what works best for us and it's ever-changing. Tonight, Broc is asleep before 10, I'll wait till the fire goes out, Brenna will be in shortly after that and Logan will probably be up till 4:00 a.m.

There's a lovely flow to our schedules and our lives. It's quite different than the home I grew up in and I'm thankful for that and that my children have grown up in a home of warmth and peace and harmony.

That was in a longer post about the big fireplace in their Florida home. Both Gail and Broc have New Mexico roots, and I'm sitting in a condo in Santa Fe, recovering from a symposium I wish they could have attended. One of our central features was fire. Keith got a cord of wood and distributed it or made it available to any of the attendees. I had made kindling baskets, with little splints and other things dipped in wax. Some were the stems of mint plants from my yard. Some were strips of a copy of The Big Book of Unschooling (my typo-finding copy; not good anymore).

Last night I was sitting with Joyce, Carl and Kathryn Fetteroll, at their "New Mexico place," with a big noisy fire in their kiva fireplace, and that was wonderful. Today I'll drive them to the Santa Fe airport so they can return to Massachusetts, and I'll take myself home to Albuquerque.

Today, through observation and experience, I was reminded that siblings bring strong emotions of both love and anger.

While I was here trying to sleep off a cold, he was with Holly, Roya, Roxana and Rosie, and later with Marty. Whatever happened to inspire him to write that, I wasn't around to help soothe and calm, but they're all grown and don't need me as they once did.

My next destination, today: 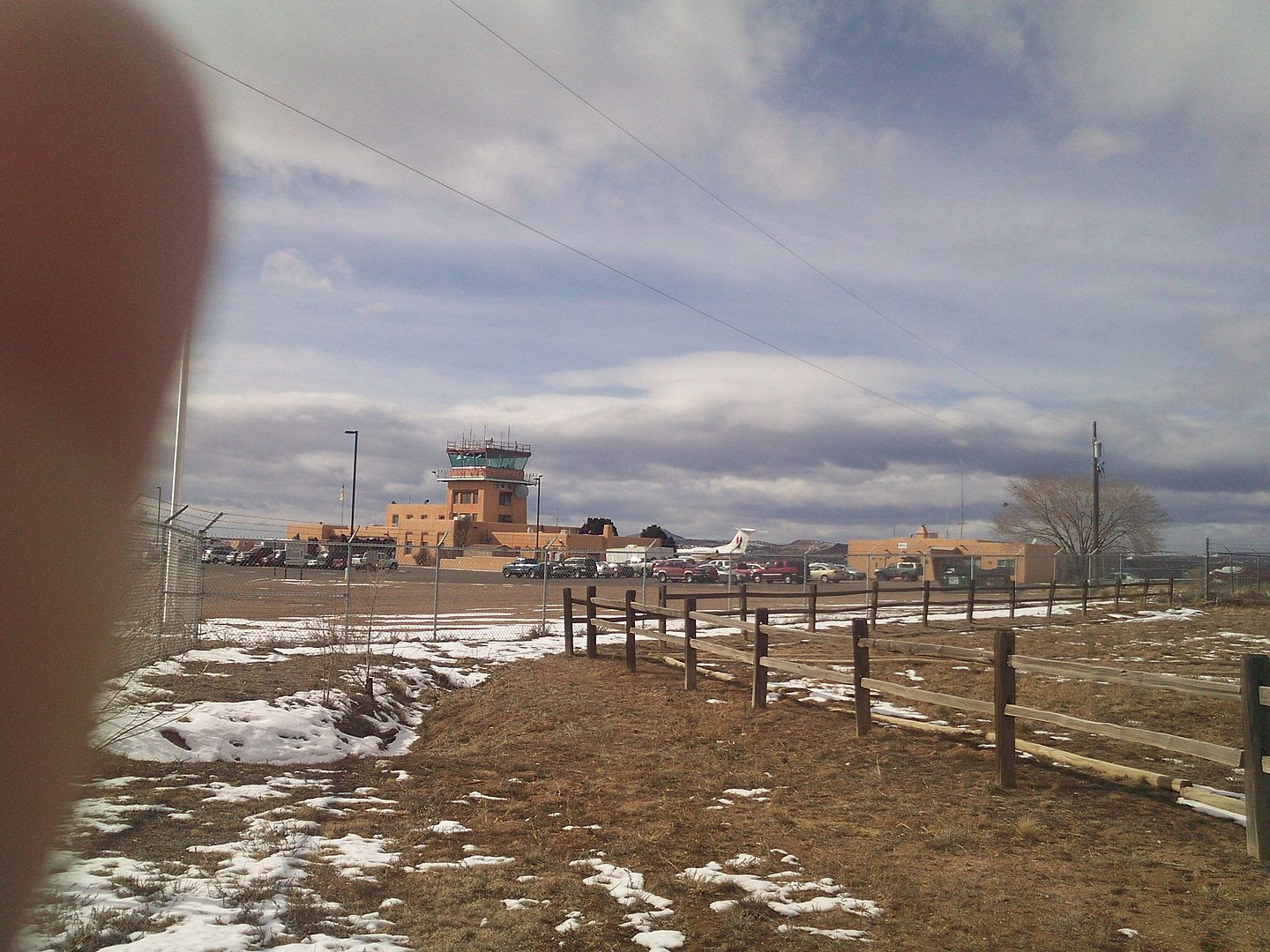 Posted by Sandra Dodd at 8:51 AM No comments: 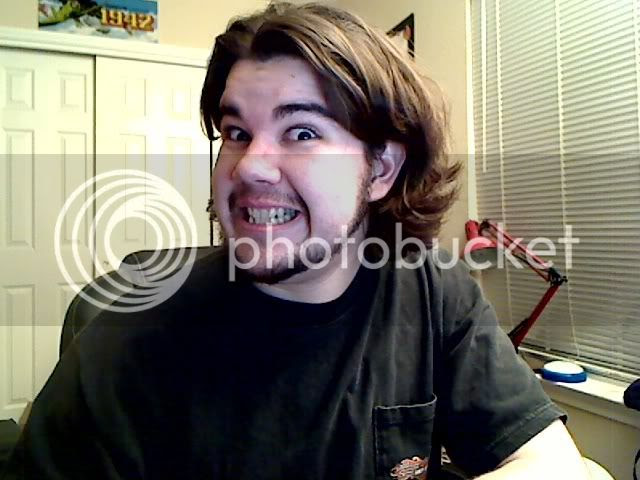 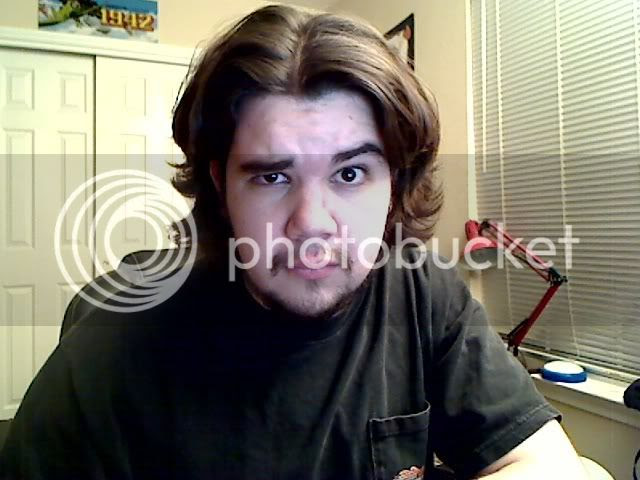 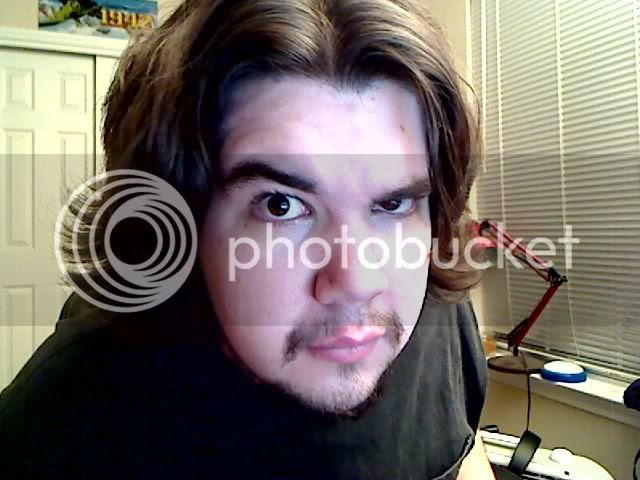 Photos of Kirby Dodd, by Kirby Dodd and a webcam, the other day.
Posted by Sandra Dodd at 7:55 PM 3 comments:

Holly's on her way home

Julie Daniel sent me photos of Holly at the airport earlier today. She'll be in the air a long time, then in Dallas/Fort Worth airport a medium-long time, and 6:00ish tonight here, home!

I'm deeply grateful to Julie, James and Adam Daniel for treating Holly as a member of their family and also as a tourist-guest and also as a friend for these past several weeks. I'm also grateful for the photos Julie has sent and the technology that lets me see photos of her before she even gets home.
Posted by Sandra Dodd at 4:34 AM 1 comment: 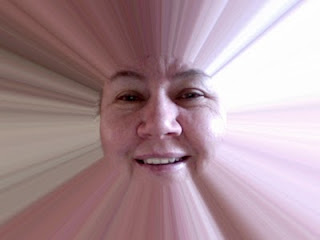 I'm thinking about a new year and a new decade. This is the decade in which all my children will probably leave. One and a half are gone already. But "already" is an interesting word for someone my age to use, as many people my age are grandparents. I have a cousin who's been a grandmother since her thirties, another since her 40's. I'm nearly 60 (as decades round up; I'll be 57 In July of 2010).

I will state a plan and a wish without elevating it to the level of "resolution." I hope this year I stay home more and pay more attention to the house and my stuff. I've been playing Mad Hatter's Teaparty with "my office" and the sunroom and the sewing room. I've stirred them to the point that there are things in each room that should be in another room altogether, and many things that should be put up on eBay or dropped off at the thrift store. Those things aren't going to rearrange and deliver themselves.

I have two possible-not-definite trips, both involving unschooling and speaking, and if those materialize that's fine. But as to leaving voluntarily for fun, I don't expect to go much much past this county. I'm going to Sandoval County this afternoon for a shape-note sing, so good thing it wasn't "a resolution"; Santa Fe County next week, but that's been planned for a long time.

That top photo reminds me a little of the sun on Teletubbies. These two are what I look like to my computer today. 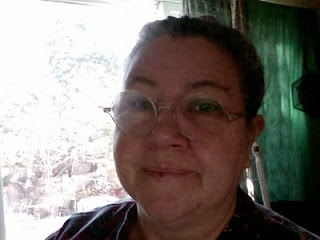 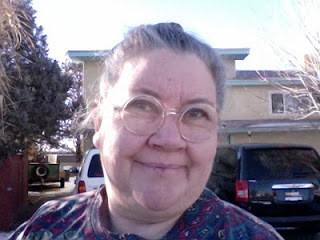