Peter Serafinowicz read the letter David Bowie wrote to me aloud, in a sort of concert of letter readings, and it's been more than a year. I never heard of it. I was looking for something I'd written about Kirby and Marty playing with friends when they were very young, and somehow in the google search this came up:

Letters Live, a review, was posted in December 2013. She wrote "Peter Serafinowicz giving life to David Bowie’s adorable letter to Sandra Dodd, his first self-proclaimed US fan who wanted to start a fanclub"

It's awkwardly worded. I had no idea I was his first American fan. He said in the letter that I was!

Really they should call that letter "David Bowie to Sandra Adams," but because it was found on my website and that's what it was first called, it stuck.

I wrote to the editor of the book, when I saw that the owner of the blog Letters of Note was publishing on paper and asked, if he had used my letter, if I could have a copy, but he didn't write back. I don't think it was in the first volume, though. I think that one was notable people to other notable people. Even that blog post, though, links to the letter on my website. Nice!

Because my letter was one of the first ones he published, it was in the top five most popular for a while. Now it's on the most popular ever, where a few dozen out of 900 are listed. "+ My name is David Jones" is the file name there. http://www.lettersofnote.com/2009/12/my-real-name-is-david-jones.html
Posted by Sandra Dodd at 2/26/2015 No comments:

Originally posted on facebook, February 10 at 8:25pm but I want to be able to send it and look back at it myself. The facebook link is leading to the photo.


I just watched THE best program I've ever seen in my whole life. I don't say that lightly. Bummer it's not in English. Alex Polikowsky told me about it last May, and I was "ho hum, don't care." Don't be that way, then, people who read this.

ALSO don't read about it. You don't want to know what's going to happen. LOTS of things will happen. It's on Hulu plus, and (Alex says) another place or two. Maybe YouTube, I don't know. [2018 note: You might need to get it through VIKI or DramaFever. It's worth paying to avoid commercials, and for them to save your place.]

I watched the whole thing in two and a half days. Monday was dedicated to just that. I never even went into the kitchen. I didn't make tea. Keith took me for a hamburger in the afternoon, but I was in a hurry to get home. 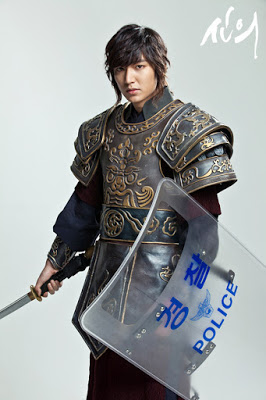 Oh right. It's called "Faith" and it's a Korean TV series, 24 one-hour episodes. Historical fiction, 1300s, armor, swords, honor, redemption, politics, a bit of magic but that's not the main thing. Swords mostly, but some spear, archery, trickery, gymnastics, household items. Magic flute, steel stabbing finger ring (don't know the name). Hand-to-hand. Some horses, but no fighting on horseback. There's a fair amount of medically-related business, as the time traveller is a doctor. (There is a bit of time travel, but that's not the main thing.) There are aspects of vocabulary and of handwriting that I appreciated even though Chinese characters and Korean writing mean nothing to me—still, as elements of the plot I liked what they were doing.

The subtitles aren't great, but after a while I didn't care. I don't know (don't care, don't WANT to know) if the costumes and armor and weapons are period. REALLY I don't care and if people put stuff in the comments about it being not period, I won't be your facebook friend anymore.

When I looked something up and saw that there were 24 episodes, I was sad to know when the end would come. If you watch it, SERIOUSLY, just try it out and don't read about it first, because the joy of NOT knowing what's going to happen will be wonderful. From episode 18, I started thinking actively about what other movie or tv show I thought was better than this. From episode 20, I started to feel sorrow that I would never, ever again be able to see this program for the first time.

Alex says give it six episodes before you give up on it, but I was hooked by three.

Today I had other things to do, so wasn't able to sit and totally marathon, though I did want to finish it before Kirby and Destiny got here (and I did). Between times, I thought hard about what show might be comparable and honestly could not think of anything. I have loved a lot of movies in my time, and have had some TV series I obsessed about, but this is it for me. I wouldn't mind finding something better someday, but I don't expect to.

I didn't mention what Alex said to me before she even mentioned the series. [Came back to edit this. I still didn't. She raved about the lead actor being handsome.] The male star has a great voice (and many other attractive attributes, so I'll bring a photo of him so people don't accidentally read plot details looking for his picture. :-))

Sets are nice, cinematography is GREAT, direction, script—apparently, even though I couldn't understand them, I could hear when there were parallel phrases or lyrical comments or staccato comments, and those things aren't random, with good writers. Props and sets were fun. There was a wheelbarrow halfway between a European wheelbarrow and a Chinese mountain wheelbarrow, and I'll try to get an image of it for my wheelbarrow collection at some point.

The lead actor's name is Lee Min Ho. The character is great. 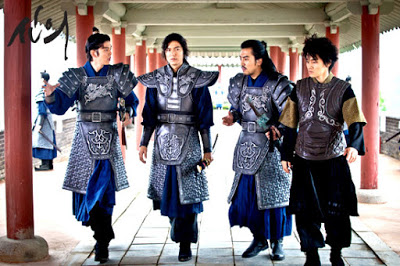 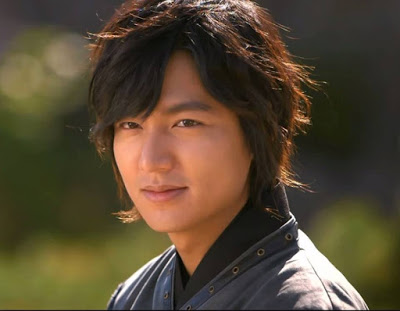 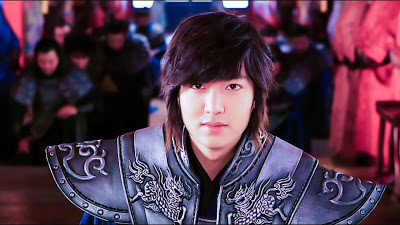 Similarities over the years

Holly Dodd and Brett Henry (a homeschooling friend since he was eight years old, and Marty's best man), first in November 2014 (in Las Vegas for Marty's wedding) and then another of them dressed up, ten years or so ago:

Everyone's hair is different now. Keith and I are grey, Marty has hair and a beard, Kirby has shorter (but still long) hair and beard. Holly's is shorter, with little braids and decorative sculpting.

Don't anyone save these. The photos were dusty, maybe the scanner glass, too. I'll re-do them sometime soon. These are too speckly for long-term versions. 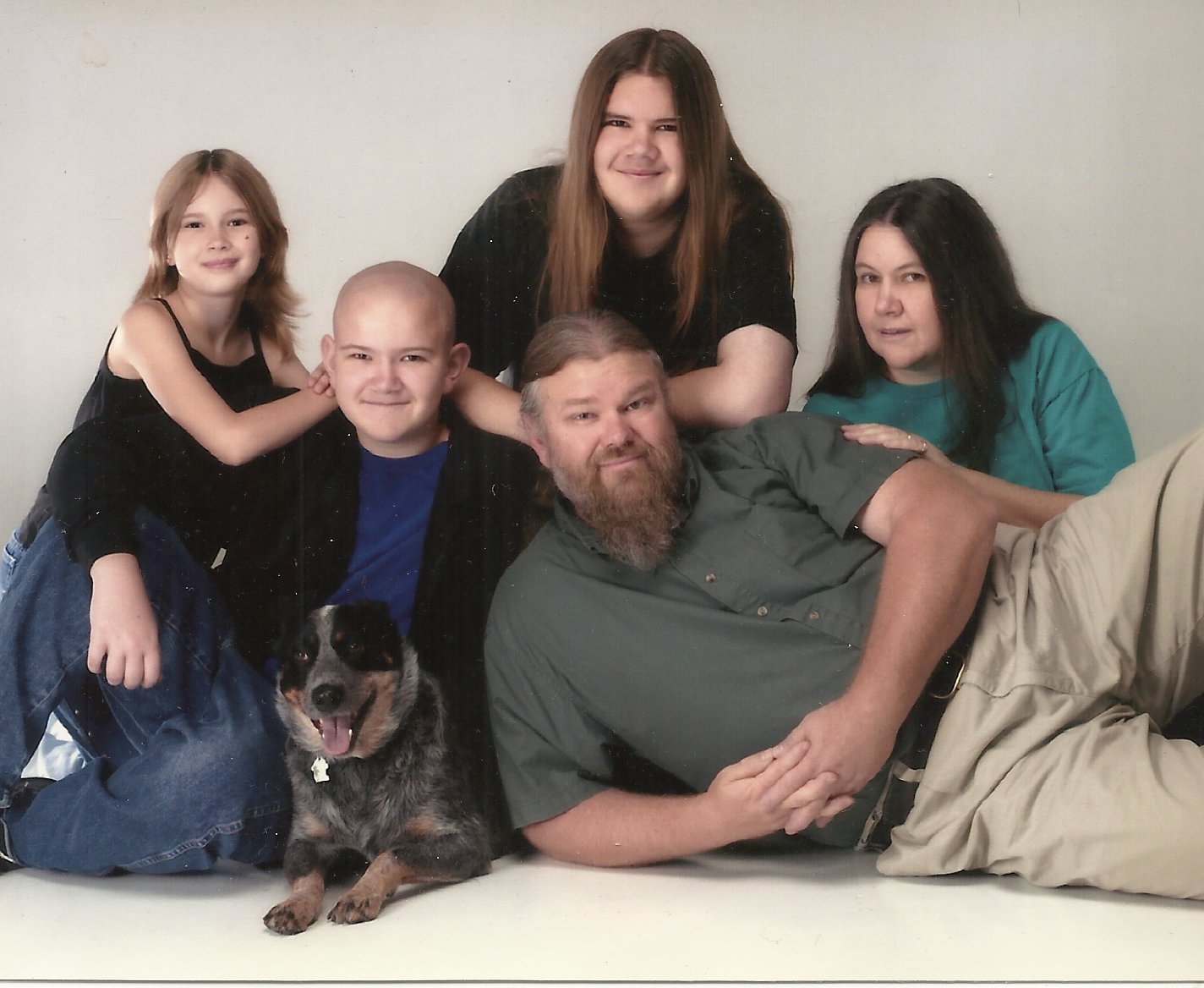 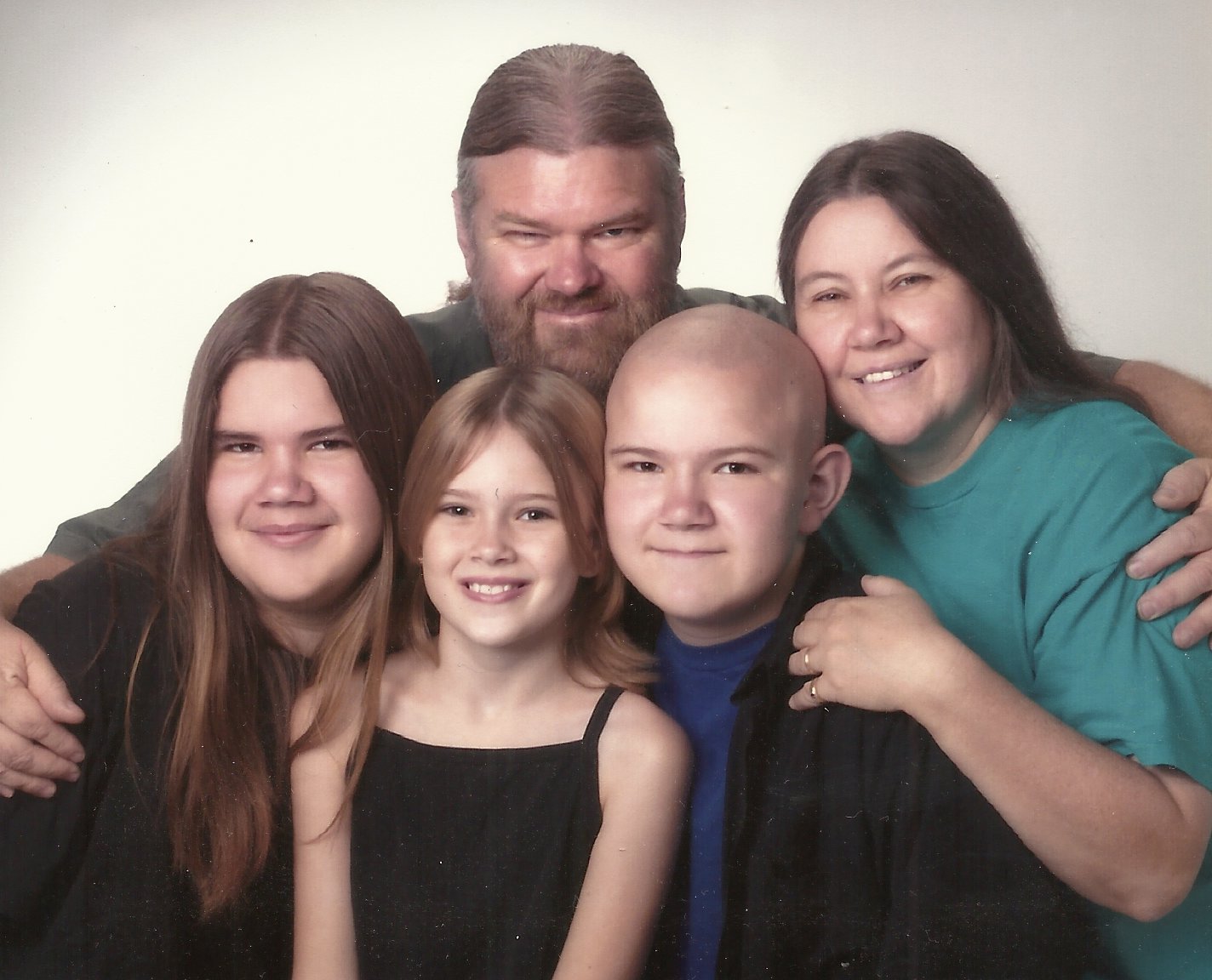 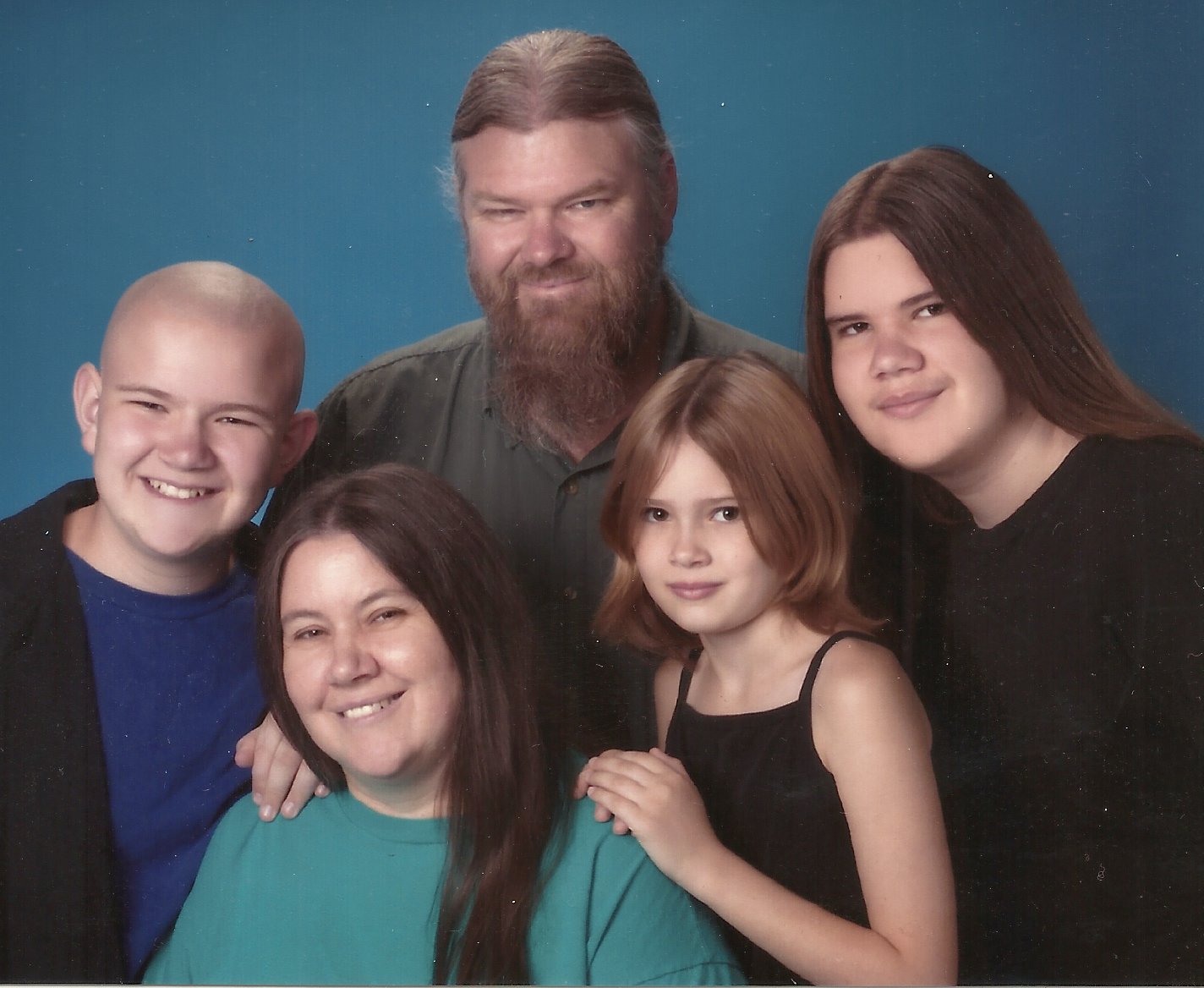 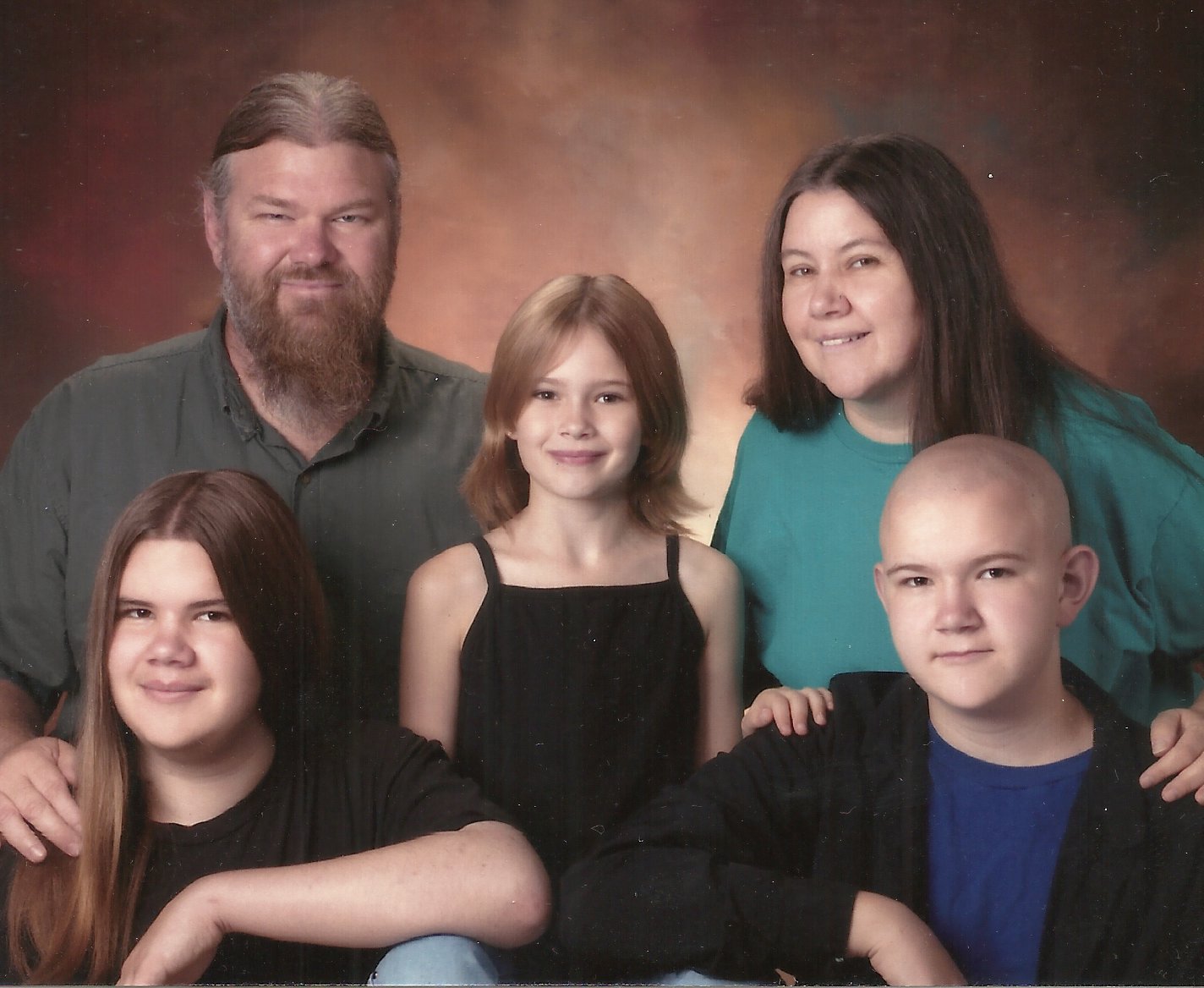 Chicken and Walnuts in Pita 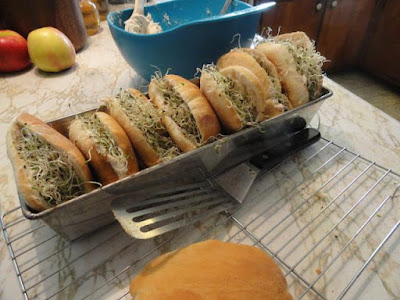 There's one recipe I make a couple of times a year, and my cookbook is wearing out, and Destiny wants the recipe, so I'm putting it where I can find it again myself.

alfalfa sprouts
pita bread that can be opened up

These can be made the night before.

I don't like green peppers so I leave them out, and use green onions instead.

Usually I put the walnuts in the food processor and leave them rough, but not big pieces.

I boil the chicken before, and work with it cold. (Usually chicken tenders from Costco.)

NOTE ADDED in February 2016: Though it's not necessary, the last few times I've made it, I have put the cold chicken in a food processor with the walnuts—and chop it to small bits. So when it's in with the cream cheese, it's more like a chicken spread than like chicken salad. Depending how people feel about the textures, plain chopping would be good, or food-processor.

The title is in print, but a newer edition and I don't know if this recipe is still there.


Whole Foods for the Whole Family: La Leche League International Cookbook. My edition was from the 1980's. I don't think it's still in print, but you can find used copies. This recipe was the best part for me, anyway.

Commercial alfalfa sprouts are harder to find, so I've started making my own. Sometimes I've made my own pita bread, but usually I buy it and cut it in half or quarters. With own-made, it's easier to make bigger or smaller or assorted sizes. :-) 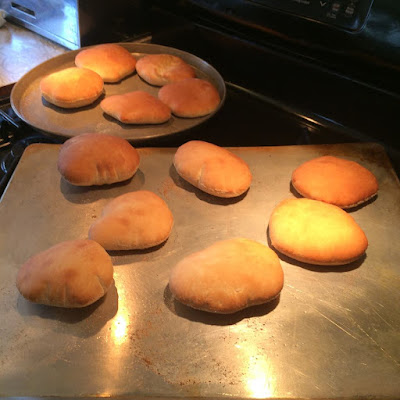 Not my video, but the caption said: Published on 24 Jul 2012
On ride clip of the only surviving Razzle Dazzle left in the World. Widely recognized as the first white-knuckle ride in the World & the forerunner to many of today's novelty rides. Filmed during the Fairground Weekend & Mechanical Organ Gathering in July 2012, where the ride returned to service following a refit

I was at the Hollycombe Steam fair on the Mechanical instruments weekend in 2013, with James, Julie and Adam Daniel, and Joyce Fetteroll.

I'm planning to go there in September 2016 to see it with the electric lights on, which they only do in late September and early October, for three weekends or so.

A camera I had when I was seven

My sister asked about a photo of her, and when I went to find it I found four others I probably had never scanned for her. If she had seen them, it had been many years.

I sent the first scan, and a note, by e-mail, and figured I should save it here and try to find the rest of that roll of film, from 1960, gradually. I'm up to five of them.

The note to Irene:

I took this photo with a camera someone had given me. The film had to be put in by an adult in the dark, so I guess it was 35 mm plain-old film.

I only took one or two rolls with it, ever. I have a few photos from Ft. Worth and a few from New Mexico, so it must have been that summer we moved. I probably got it for my birthday.

Mommy took us to a fiesta in Chimayo. I took it, to take pictures. It was left in the front seat of the car and I cried to go back for it, but it had been stolen. She left the car unlocked and windows down. People just did in those days. We saw horse races in some field, and bought food from little stands, and went home. No photos of that day. I didn't get another camera for a long time.

I had written on the backs of the photos, in my seven-year-old writing. Though they were dated October 1960, that's when they were developed. They were taken in summer. 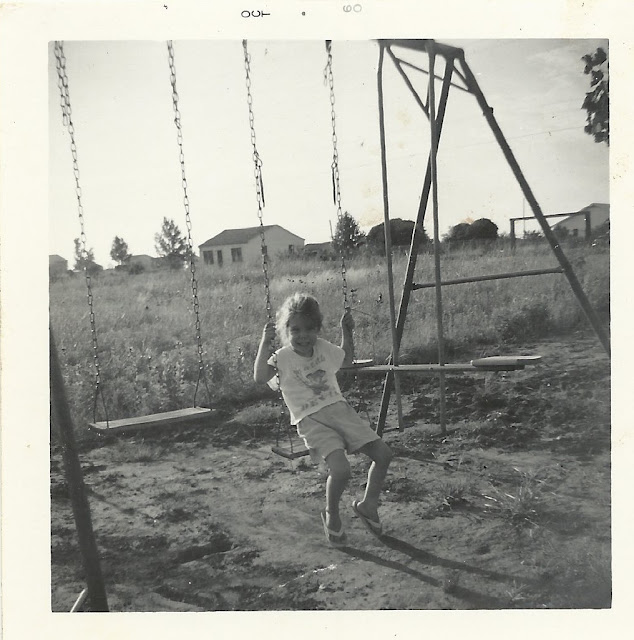 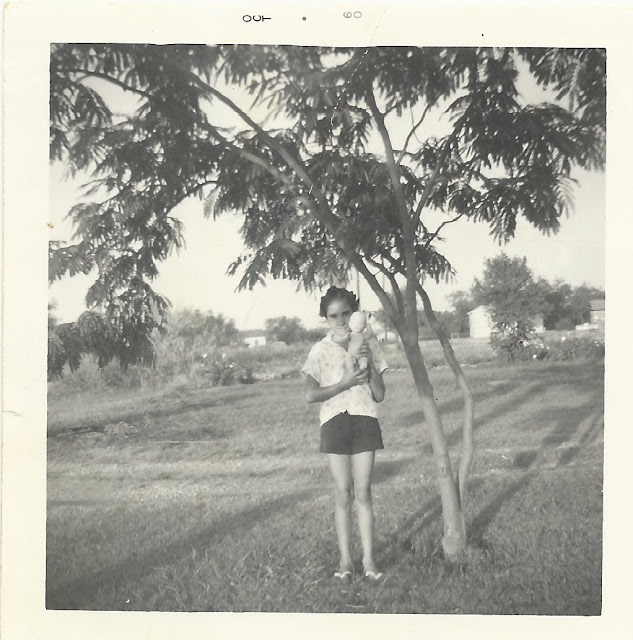 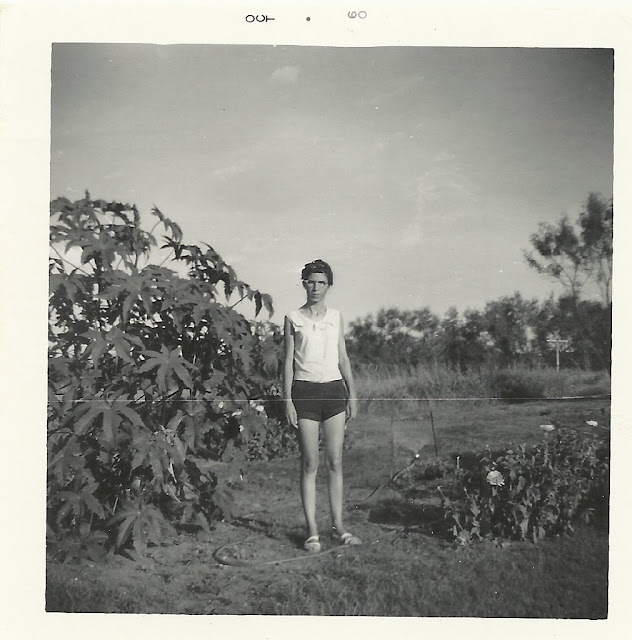 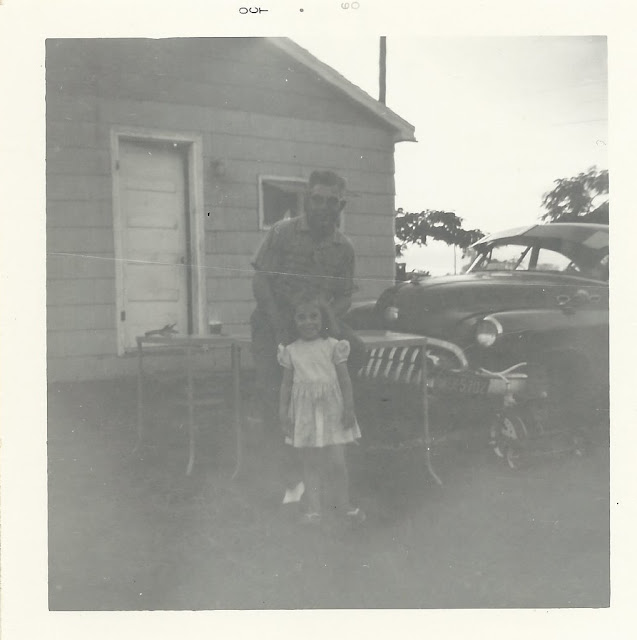 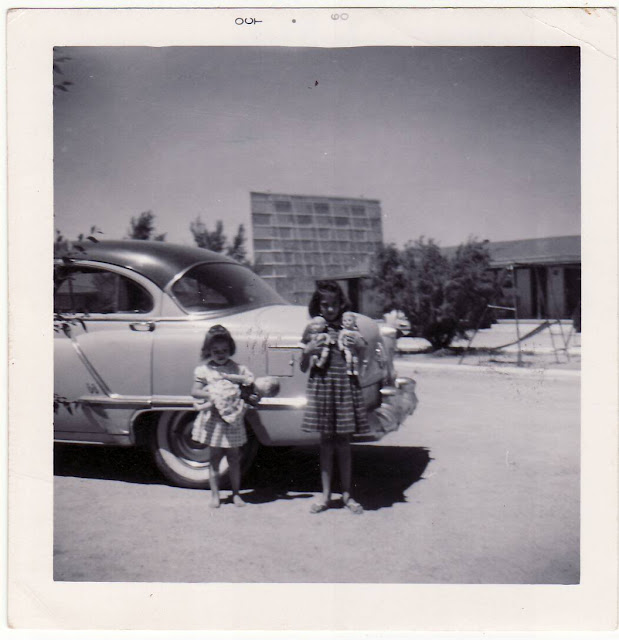 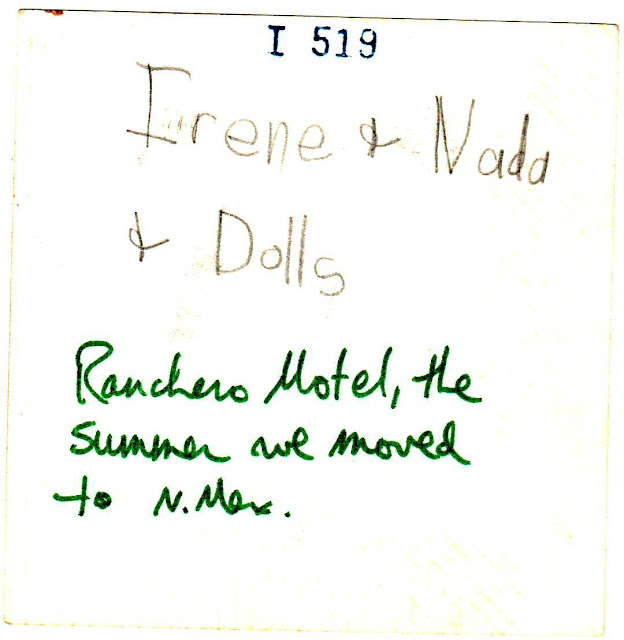 NOTES TO MYSELF:
We were in the Ranchero Motel for a month, I have always thought. We were there at least one week into the school year. So MAYBE I got this camera for my 7th birthday. I don't remember getting it. My birthday is July 24. If we left for New Mexico after my birthday and moved to the rental house on McCurdy Road a week after school started, that might put all these photos in summer of 1960.