Yesterday when Holly and I got back from the thrift store, I saw a little red thing in the yard. Woohoo!! It was TWO surprise lilies (or storm lilies, or hurricane lilies): 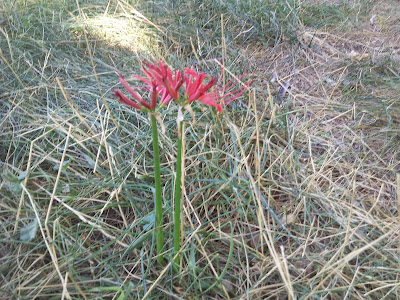 Today they surprised me again, when I went out to feed the birds. :-) 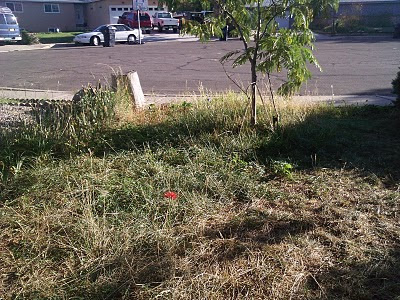 They're more open than yesterday, but this photo isn't clear. 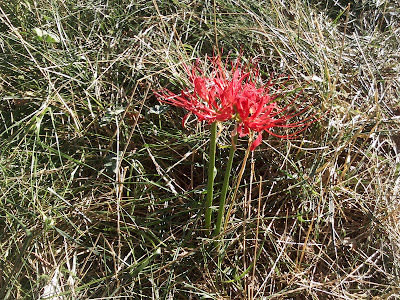 I went to find where I had first posted about these. It was on this blog, in September 2005: http://sandradodd.blogspot.com/2005/09/moonflowers-and-mystery-flower.html I bought ten bulbs, but they have never bloomed (not yet; might someday). The ones today are where that first one was, so it has divided, but it's taking it's sweet long time. That's okay. It's a gift.

I went looking for images. There are other flowers if I look up surprise lily, storm lily, hurricane lily, but because someone had said they're called "naked lady" I used "lily naked lady" and found (among other not-the-sames) this, which is exactly that, and taken with a great camera: 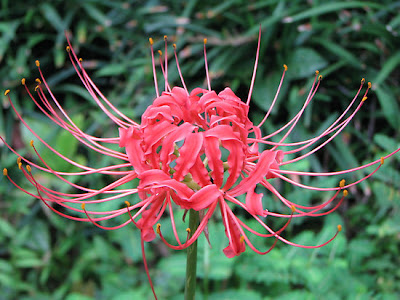 Because it's on a commercial site, I bought three cards and that makes this a review. What a beautiful image! It's by Eric McQuiston. I wish he had gone to the edges and gotten every bit, but still... you can see the details and imagine the edges. His other photos are really beautiful, too.

Things I didn't buy at the new Goodwill

There's a new Goodwill near our house, in the SE corner of the strip malls at the SE corner of Menaul and Juan Tabo. Holly and I went yesterday. She got some Rocky Horror costume bits, and we got a few other things, but here's what I collected in images only. There was a time I'd've brought them home, but I need to stop collecting games and boxes. Or at least slow down. :-) 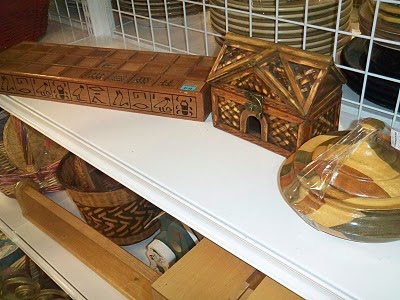 Keith has a wooden Senet game. This one was missing its "dice" (split sticks or ivory sticks) but had four markers (two for each player). The box that looks like a house had a little opening in it, and I don't know the purpose of it. It was an arched door, like a mouse hole, in the bottom. If I had a mouse in a cage I would have bought it for him. 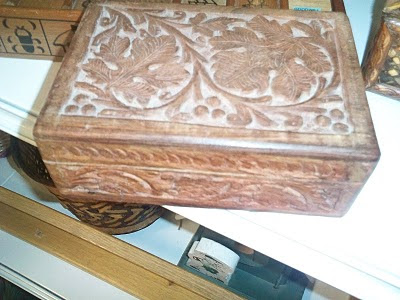 Then I saw a wooden box from India. I have always loved those. It had a design of leaves, and I'd never seen one like that. I was tempted. 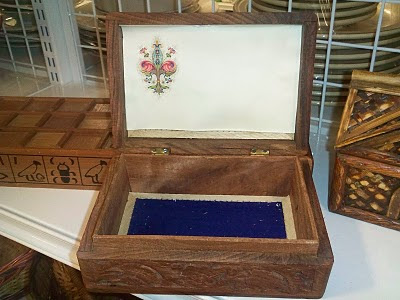 Then I opened it and someone had lined the lid with Italian stationery in a design I also love (and have used lots over the years, and still own a bit of something similar). I would have taken that as a sign to BUY IT, years back. This time I took it as a sign to think warm thoughts, take its photo, and leave it for someone else. 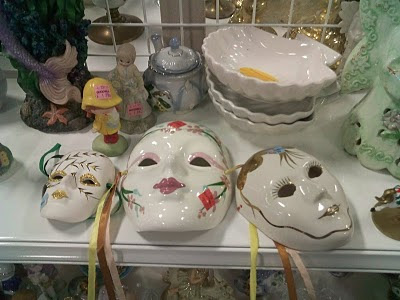 These reminded me of Kirby (and thoughts he expressed last weekend about a planned tattoo), and of Sarah Tynker. 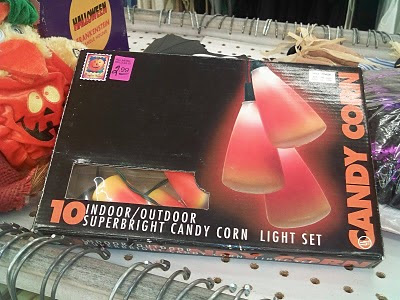 A year ago I was planning a trip to India, and one of the things on my list to take was candy corn. While I was there, I bought some flowery little electric lights, in Bangalore, but I haven't gotten an adaptor and transformer for them yet. So this reminded me of India, and how much time has passed since I was there, and about getting lights over the hot tub, which I'm planning to clean and heat tomorrow. It's seeming like fall now, and not summer. It's time.
Posted by Sandra Dodd at 9/19/2011 1 comment:

"Maybe it's you," Holly said when I pointed out that Will gave me a look, and Marty gave me the same kind of look in the very next photo. :-) 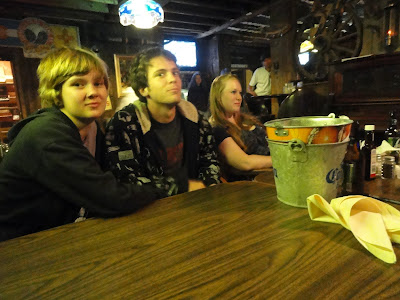 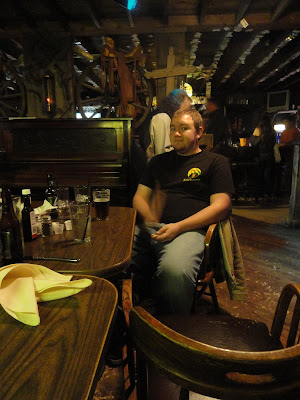 We were at the High Country Restaurant hearing my sister perform. More photos of that weekend outing are here: http://sandradodd.blogspot.com/2011/09/chama-this-weekend.html
Posted by Sandra Dodd at 9/18/2011 1 comment:

That wasn't Marty's beer; the can was already there.


This is just part of one song Irene wrote; I was shy to record a whole song, but this gives an idea of the sound and motion of it all.

Speakers, some other people, some Ninja Turtles, a spoon: 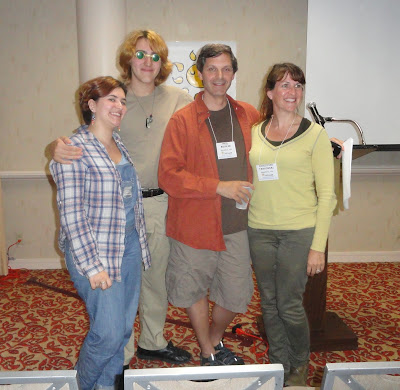 There was a very cool display at the San Diego airport. I saw it back to front, and had fun trying to figure out whether it was steam punk, medieval, fantasy, or what. The technology wasn't medieval, but many of the artistic motifs and styles were.

A link to the artist's page follows my imperfect images. There are other images there, but I liked the installation—book-page backgrounds and such. I didn't have time to stand and read or examine, unfortunately. I was in a hurry to get two computers from a luggage carousel (not knowing that's where they would've ended up... and before long the electricity went down at the airport, but I didn't know what was going to happen, so here's the art, which seems a good match for unexpected quiet and darkness.

I'm in San Diego, listening to Ronnie Maier, sitting between Holly and Kirby, near James and Robyn Coburn, behind Pam and Rosie Sorooshian.

I got an e-mail this morning saying the paypal button wasn't working at the Big Book page, but I think it's fixed now.
http://sandradodd.com/bigbook/order


If it's not working, please let me know.

Books can be ordered even while I'm here, though, because Keith is home and so are some already-packed-up books!

I hope everyone's having a good time, wherever you are, and thanks for keeping up with my web page updates. :-) 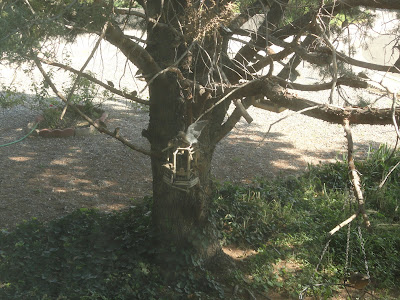 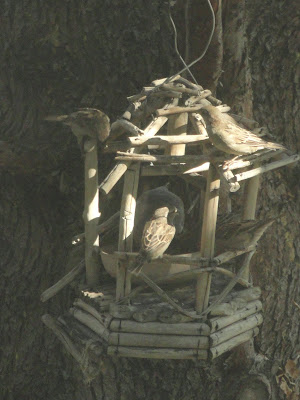 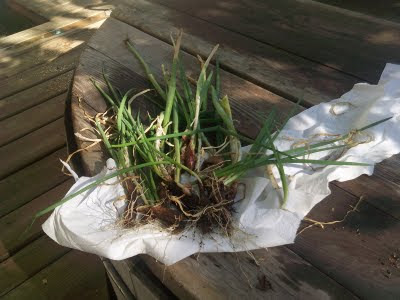 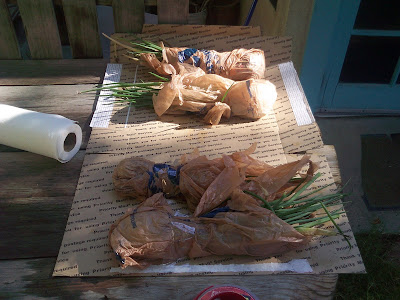 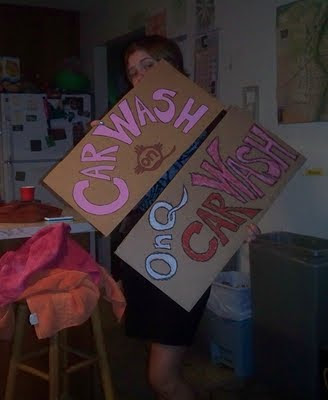 What those photos have in common is that they were taken in the past week, in or right outside my house. I like my life.
Posted by Sandra Dodd at 9/04/2011 3 comments:

When someone clicks a link that doesn't exist, sometimes they get an offer to buy that website. That's always irritating. Or sometimes they get a default page. It's called a 404 error page. They can be customized, but most sites don't know or don't bother.

I've always liked mine. I figure most of the time people get there, it's my fault because some link is broken, so I use it to get messages from readers. But sometimes readers send me a broken link without saying which page they were on. That doesn't help me.

On another blog there is a great collection of artsy pages. Some make me sad for insulting the person who landed there. It's probably the webmaster's fault they're there. One insults the reader for having guessed, while mine compliments them on having guessed (because I'm trying to make mine guessable, for the most part).

Here's one that's very pretty, but you need to put the mouseover on it. I got it from the comments of the blog post I'm going to list in a minute.

https://github.com/404
(Move your mouse around it a little.)