...or: Young Adults at Christmas I have no more shopping to do. There's a 25-year-old piece of wrapping paper I intended to have laminated for Holly, but I can do it later. I got it in England in the late 70's and it's a photo of antique keys laid out all parallel to one edge or another, and lots of them. I've pulled it out to look at it many times, and once it was up on a wall. Now it's in a tube. The gifts... music and movies, mostly. Some clothes. A couple of books. Everything is something at least two people would like (not counting the clothes, I mean--not interchangeable for sizes). There's nothing there that the recipient won't be willing to share with others, so we'll all be rich in music and movies. There are a few toys, but not many. We're getting to that point now. We were all going to go to some friends' open house tomorrow (Christmas Eve), but Marty got a new job and said "sure" to everything, including "Can you work Saturday?" So it will be all but Marty. At 3:00 Keith and I are going carolling with three other friends we've sung with on and off for a long time. We're going to run through a few things and organize ourselves, and then go look at lights and go to a few homes of friends and relatives. I didn't pick any places. I don't care and want it to be as low-key a deal as possible. I tried to persuade Holly to come with us, but she'd rather stay home. 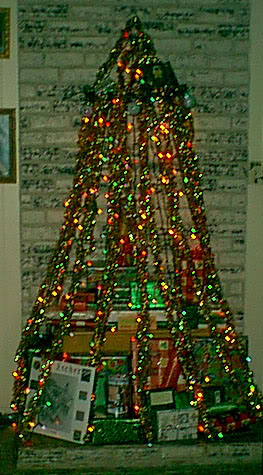 That's not a tree. It looks pretty good in the dark (not as good with a flash); it's just lights and tinsel run back and forth between a semi-circular hanging candle holder and some eye-screws put into the plywood platform that once had tile, before an indoor fountain malfunctioned some years back... I had planned to get a real tree, but a couple of the kids liked this thing I'd done for the past couple of years. It is easier, less expensive, and ecologically holier-than-I-am, but I don't get to use my very-many tree decorations and the house doesn't smell piney. I'm enjoying having older kids. I do miss the excitement and toy-stuff, but each of the kids thought of something very sweet for at least one of the others. Marty has two things for Holly and nothing for Kirby, but he'll probably take him to a movie or something before long. Holly has two things for Kirby. What Kirby ordered for Marty might not be here before Christmas, but it's altogether a peaceful, generous, patient year as this stuff goes. There is my Christmas info-dump and souvenir report.
Posted by Sandra Dodd at 9:44 PM

Email ThisBlogThis!Share to TwitterShare to FacebookShare to Pinterest
Labels: holiday

I love the tree. :) One year, we weren't able to afford a tree, so we cut a large one out of butcher paper and glued beads and garland to it. Sierra was only 6 and she absolutely loved it. We still have that tree folded up with our other decorations and whenever I see it, I remember how much fun it was to make it!

We had a hand-done fireplace at our old house when the kids were little, and we put the paper inside under a desk, and hung stockings on the front edge. Fire and bricks were done with markers and tempera paint. Our fireplace could've gone with your tree!