...and here's the Friday Fill-In, with cheese:

1. When I fell in love with Keith, I was married to Jimbo. That's embarrassing! 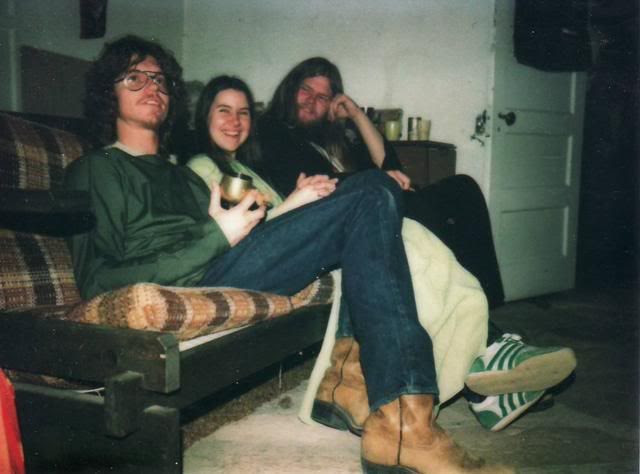 There we are, New Year's Eve 1977 or early 1978. Keith is the one looking at me like he thinks I'm wonderful. I wasn't yet looking at him then, but I did before long. We were kinda half in SCA costume, half not. I loved those Adidas, but they did not go with that dress.

Some of my readers weren't born yet. Keith and I have been together 30 years, married for 24, but it's still a shame I carry.

2.I like to open the windows when the flowers bloom and it heats up outside! ...because it won't be long before I have to keep them closed again because it's too hot outside; such is life in the desert.

3. Oh no! The internet connection is down, so I might as well do the laundry..

4. Wife Swap is the craziest tv show ever. Three different times I've been asked if our family wants to participate. We don't.

7. And as for the weekend, tonight I'm looking forward to tomorrow, tomorrow my plans include sleeping all the way to Texas and Sunday, I want to HUG AND KISS KIRBY DODD!!!!

Keith and I are going to do something we've never done before. We're going to visit our own child in his own place that's not another room in our house. We're driving to Austin, with Holly, to be with Kirby for his two days off.

Photos will be uploaded to a folder in a couple of days, and thereafter maybe, so check if you want to.
http://s26.photobucket.com/albums/c111/SandraDodd/Kirby/texasApril08/

Things Holly taken with Holly's camera phone will be uploaded here first and then moved:
http://s26.photobucket.com/albums/c111/SandraDodd/ The photo of the woody station wagon was our test run. Nice for a phone-camera photo! I don't know whose car it is; we saw it passing by and I made a u-turn because I don't think Holly had ever seen a real, true "woody." The word itself has moved onward and not so upward. Oh wait... Oh never mind...

I would be asleep, except I told Marty I would make him some bread, and I burned it. The middle's still good, but it's not sliceable. So I'm making some more, but in the machine, and not loaves out in the oven. Marty worked two shifts today at the restaurant where he's bussing tables. He's liking that job. I'm glad. The only bad thing is it's keeping him from going with us to see Kirby, but he went last fall.
Posted by Sandra Dodd at 7:32 PM

At the Live&Learn picnic in Albequerque following the conference, I couldn't help but notice your bright green sneakers (that matched your shirt BTW). I guess your fondness for green sneakers goes way back! ;)

We're in Austin. Kirby's at work until very late. We're at a motel and will meet him tomorrow when he wakes up and calls us, probably noonish.

I'm wearing brown sandals, but I did bring some green and blue tennies I dyed by myself.