So I wrecked the Saturn

At first Vince was cussing me out and I didn't mind. I rolled down the window, assured him I didn't do it on purpose, said I was very sorry, and asked him if he could call the police. 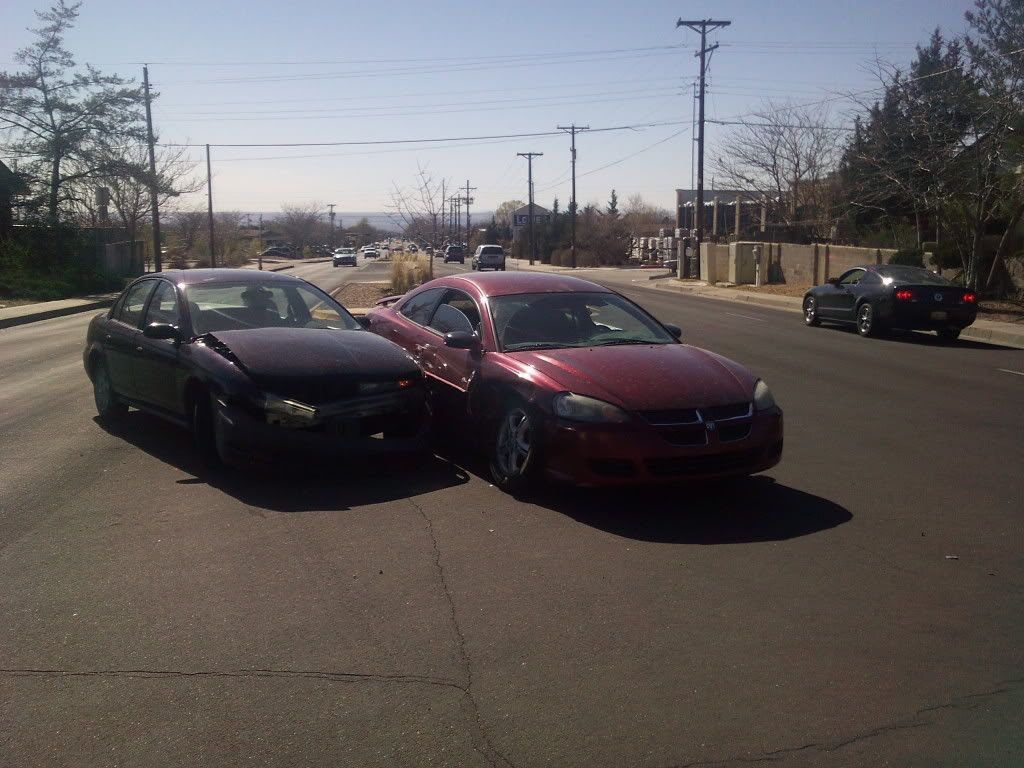 Vince called the police. I put the emergency flashers on because though I had conveniently moved his car out of the traffic, mine was still half in the inside lane. A nice man who seemed Middle Eastern stopped to make sure I wasn't wounded, and helped me get out of the passenger side. My glasses were kinda broken. I didn't notice until after I climbed over the gear shift and all and got out of the half-sprung door and looked back and saw the parts on the floor by the clutch pedal. The lenses were out and the plastic frame was too bent to pop them back in. I wasn't scratched or bruised.

So Vince and I got out and talked a bit, and his wife came by (I guess maybe he had called her, because both of us lived very near there). I called Holly. She was at the hairdresser watching Brett get a haircut. He was just about done, and they had two cars, so she sent him to get Keith (which is where I had been going, because he had taken his motorcycle to the repair shop and I was going to pick him up and bring him home), and she went to the house to get my other glasses and bring them to me so I could tell a vehicle registration from a proof of insurance card. Having Holly there made it much better.

Weren't the sky and mountains pretty today? And there's that "Cultivate Mindfulness" sticker I got because it was just like Kelli Traaseth's, and the "Got Virtue?" sticker Ben Emerson gave me. I mindlessly and rudely wapped another guy's car with Keith's car.

Vince and I are both okay but it was not good. The very nice young policeman pointed out cheerily that I hit Vince at the best angle, because if I had pulled all the way out the other car would have t-boned me and I would've been hurt. I think that was euphemistic for "dead." So I pointed that out to Vince, who was initially pretty pissed off that I had hit him. I told him even though it would have still been my fault he might have hit and killed me and he would've felt bad. He agreed. It cheered us both right up.

And although his car had a broken axle, mine was ugly but still driveable. Not in the dark, because the headlights are pointed at imaginary things.

By the time the tow truck came to get Vince's car, Keith and Brett had walked up there from the house. Holly drove Brett back, but Keith walked me home because I didn't want to get in a car. He went back with bailing wire to put the car together enough to drive it home.

I called USAA. Then Vince's insurance agent called me. Was there a citation? No, I said, but did she think I might get one in the process of the police report? I didn't run the stop sign, but Vince did have the right of way. She said she's never seen that happen.

Vince called after a while to see if I was okay and to tell me he had no hard feelings and accidents happen and he wanted to make sure I wasn't feeling too guilty. It really did make me feel better that he called. I was going to call him later to say I had asked about a rental car for him.

As such things go, we both walked away, and although he's horribly inconvenienced, I'm glad he doesn't hate me. And although Keith is inconvenienced and it will cost us money, he will eventually love me just as much as he ever did.

I cleaned the hot tub today and so I will sit in that later and my knee will feel better. Tomorrow Holly will take me to pick up a copy of the police report and to see if the optometry folks can fix my glasses, or get me some new ones. The bifocals are the ones she brought me. The purple prescription reading/computer glasses are the ones that didn't survive.

These purple glasses are in three pieces: 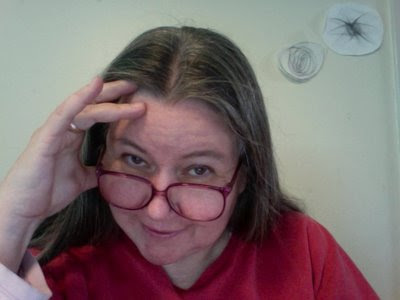 The photo is from yesterday. Nice record of some glasses I really liked.
Posted by Sandra Dodd at 6:49 PM

Yikes! I am glad to hear you are okay and that no one was seriousy injured. Be gentle with yourself today, it sounds like you're pretty shaken up.

Oh My!!! I'm so glad you are okay.
Cool that you got such good pictures of it all...and the sky is beautiful.
Take care of you the next few days....

I'm so glad you're ok, yes, like Gail said, I hope you can take it easy the rest of this week.

I have only ever wrecked one car, and it was my fault, and not my car! :-(
I it easy to be hard on yourself, I sure was, but it happens sometimes. I am glad you are ok and that you didn't have your babies (who aren't babies, but in scary situations Richard always becomes a baby again, in my mind!) in the car with you, and that Holly was able to be there for you.

I'm glad no one got hurt and your neighbor was (eventually) understanding. Get some rest!

Oh no! I'm so glad no one was seriously hurt. Hey, it was a good car, but it was just a car. You're more important.

So sorry to hear about all this but glad you are all o.k.!!!

I sometimes drive miles on automatic pilot, the same routes I drive day after day, week after week, year after year. It's scary when I realize that I'm not paying near as much attention as I should be.
I'm so glad that you're okay, and Vince is okay. Enjoy the hot tub! And remember to breathe...

Holy crow, Sandra! I'm glad you're okay. Rest as much as you can and maybe ice that knee. Sometimes, you only feel it a few days later.

Sorry it's been such a rough week for you....

ouch! When I hit another car I totaled ours. I'm so glad that you're ok.

So glad to hear you were both okay. Talk about shaking up the day a little! Take care of yourself. That post-adrenaline rush can be a doozy.

I'm joining the chorus in adding that I'm glad to know you and Vince and no one else were seriously injured. I know from experience that concern for others during an accident can make you dismissive of your own injuries, so take it easy on yourself the next few days.

Glad you are all OK.
It is so nice when people all around are nice.
Get in the Hot Tub and relax a bit.
I have been in two small wrecks and I know how we tense up our body and get all sore and only feel it after about 48 hours. So take care.

My purple glasses were reconstructed. They're scratched and a little weakened, and I will need to get another pair of reading glasses, but the tech at the optometry office very sweetly did what the could.

I've been hiding in my room, generally. It seems safest. Holly did drive me all around on errands mid-day today. I have the police report, did the post office. She's a sweetie.

gosh! I am really glad you are ok! ?We got in a mere fender bender when Gary's dad was dying in the hospital and he got out and ran the mile to the hospital to see his dad while I dealt with all the "stuff" Life is really weird sometimes. I love the pictures of Marty with his new girlfriend, he looks so sweet in them:)
Kelli

Whoa! So glad you're okay and that everything is working out nicely. Be gentle with yourself.

I'm so glad nobody was hurt, and that your Holly is there for you. Sounds like you helped Vince, too. Amazing.

I'm so glad that you're okay. And, such a great attitude about it all. Car accidents can be very traumatizing. I remember thinking about all the positives as well, when I got side swiped and my car was totalled, with my (then) 4 year old in the back seat. I was so grateful that we were both okay, and that Violet was not in the car with us and sitting on the side that she usually does when she's in the car with us, the side that got hit pretty badly....
Take it easy.

This week has SUCKED for so many we know. It is Friday, tomorrow is new, you are safe, take care of yourself.

Sandra- I'm so glad you are ok. Car accidents can be so scary and emotional. Rest. Breathe. And for goodness sake, hot tub! I hope you can take it easy this week.

Sandra! I am very glad your both okay!! It's hard to start driving again. I was so super aware of everything on the road.
take care my friend.
Heather

I'm sorry, Sandra. It's easy to feel awful about yourself after something like that. And isn't that rotten? Because we never feel like the greatest person on the planet if we do something wonderful but if we make a mistake we so readily feel like an idiot.

No crunching crash can take away from your goovyness or your brilliant work.

I smacked a guy a year ago last October. He didn't even stop, just waved and kept on driving. (Dylan said he probably couldn't stop because the crash had severed his brake line. He's such a horrible child) It makes you question your ability and judgment. You'll get brave again. Be nice to yourself.