In a 1997 article called "Rejecting a Pre-Packaged Life," I wrote:

Enjoyment—that word itself is hardly used. Enjoyment is seen nearly as a sin for some people. "You're not here to have fun, you're here to work." Why can't work bring joy? Any tiny moment can be enjoyed: the feel of warm running water when you wash your hands; light and shadow on the floor; pictures in the clouds; the feel of an old book. If you see an old friend, that can bring pure, tingly joy for which there are no words.

Today I was watching episode 50 of a Korean "variety show"—what Americans would call a reality series—and someone is decribing a Korean word based on a Japanese term (or phrase) that they ranslated as "small but certain happiness." Trying to find the original writing in English, I came across the article [Trending] #Small but certain happiness #小確幸 It's from a 1986 essay by Haruki Murakami (Western name order, on that one) called "Afternoon in the Islets of Langerhans." The article, describing the essay, says his examples are:

...eating a freshly-baked loaf of bread with one’s hands, seeing neatly folded underwear in a drawer, wearing a new shirt that smells like clean cotton and letting a cat enter into a bed with a rustling sound.


So in retrospect, as decades have passed, maybe there will be a word. There's a word in Korean. 小確幸

But wait—it jumps to another of my favorite things, which is word histories. It seems the term was created in Japan from Chinese idea-elements, and then taken up by Korean. Maybe in the way we can still create English terms from Greek and Latin elements, and maybe other languages will use the term, too. https://en.wiktionary.org/wiki/小確幸

Probably my use of "joy," and finding joy in small, everyday things is better. We already have the word joy.

The idea has been with me since before that article, and I've recommended in many ways and places that people can avoid stress and live better lives if they can become more observant and appreciative. "Stop and smell the roses" might be the best English-language prescription for that.

For unschoolers, it was easiest to tie it in with the ideas of abundance and gratitude.


There are others, there, on Gratitude and on Abundance, and with practice, those become inseparable.

Oh, sweet! Note about this one below:


SandraDodd.com/gratitude/chairs
photo by Sandra Dodd
When I looked to see some of what had come up in those search links, I saw this—the first photo I took when I got my iPad, years ago—and I was sitting in the same place: 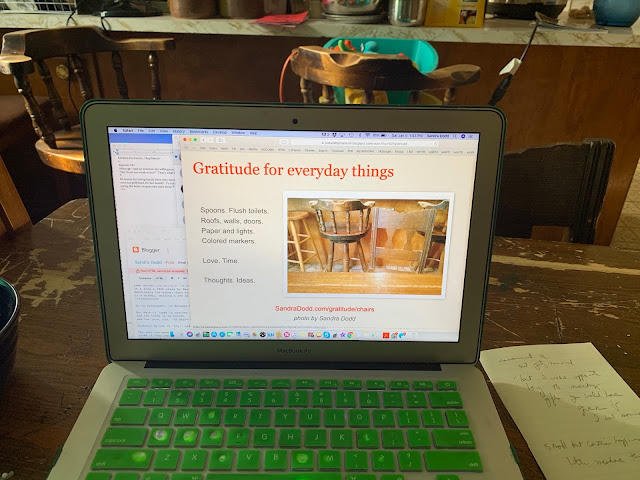