The Return of Sandra (perhaps)

I used to LOVE this blog, when people used to read it, before everyday news moved to facebook.

I think I'll start using it again. I keep wanting to write something, or keep something, and can't decide where. All around me, over the years, online platforms change or are abandoned. Someday this will go, too. I don't like that. 🙂

Nearly every day, now, I think of something I was to write and can't decide where best to put it, so perhaps I will restore this old truck.

Some of the photos seem missing. They've been moved, and I'll need to change the URLs, one at a time, but that's okay.

Some slide-shows that were easily made with photobucket lived on that site, and the code was abbreviated, so... gone is gone, on those.

Memory, not new, but the topic came up a few times recently.


We had SCA visitors once (date to be added, maybe, someday) and drove them touristing. One of them (Patrick/Padreigh (?)) posted this photo on Facebook in 2020, and I snagged it. There's me in the driver's seat, and if you can zoom in, there's Holly in a car seat and Kirby standing up. The visitors from Tennessee were out to take pictures of something, and our van was part of the something. Cool!! 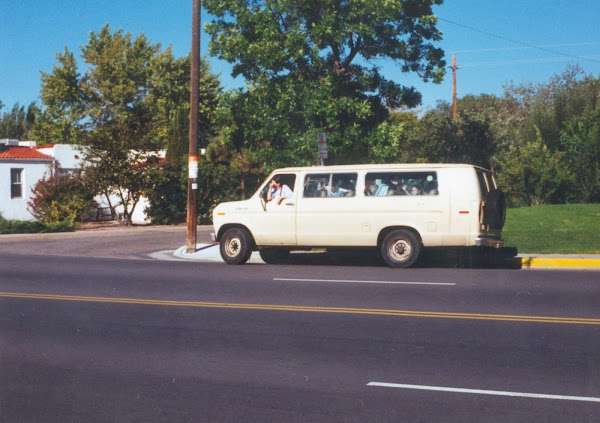 Odd, to pay a bunch of money and have the van pretty much die on the operating table. We had it towed back and Holly used it as a playhouse for a few years. She decorated it hippie-bus style and used to listen to Alice's Restaurant out there.

Email ThisBlogThis!Share to TwitterShare to FacebookShare to Pinterest
Labels: family