Kim Archuleta had a party on Christmas Eve, and the main activity was assembling a gingerbread house. She made the gingerbread and the frosting and the "glue" (frostening that will harden like sugary cement), and let people go at it. 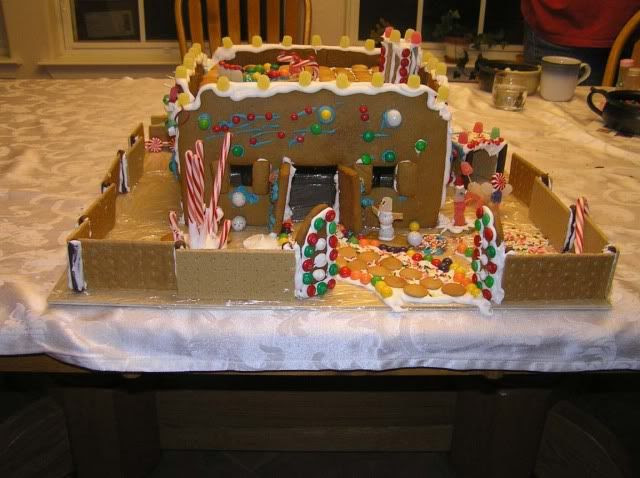 If you click on the photo you can see several other views. I did the wagon that's slightly visible in the rear to the left, and in more detail below. That started people in on building other stuff for the yard, and it was entirely fun.

I did the miniature paper chain, which is the only non-edible part, because we were making full-size paper chain for the house. I think that might show in some of the photos. Oh, the roof wasn't edible, either. It was cardboard laid over drinking glasses so it could get a chimney and a sleigh.

The candy canes sticking up are Keith's century plant. Marty did a prickly pear with green M&Ms and a cut-up gumdrop for the blooms. The yellow gumdrops are supposed to be farolitos/luminarias. 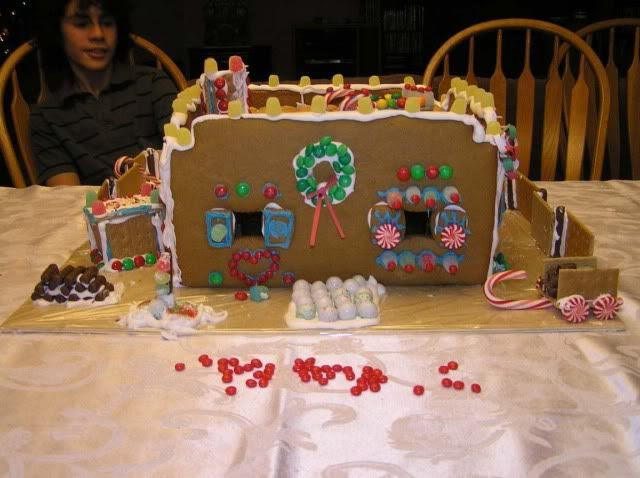 We had a ton of fun. I'm glad Kim took photos!

I'll send you a pic of ours. We've done them for years, including the siege of Troy and last year's coral reef.

Tag! You're it. Play or not, as always it's your choice. :o) http://zenmommasgarden.blogspot.com/2008/01/archive-meme.html

And I'm still holding on to the meme you tagged me with. I have to come up with some more stuff about myself first.