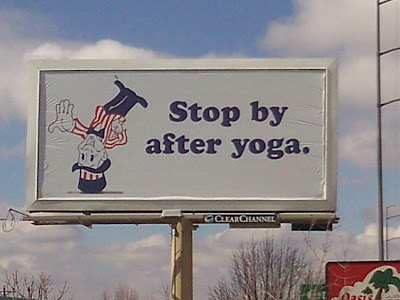 I saw this new Blake's billboard this morning, when I was driving Marty to his friend Ben's house so they could go to Arizona (Estrella War / SCA event) while Marty's jeep stayed safely inside the back yard.

Later I drove Holly to yoga, and that was two yoga-moments in one morning. She could've borrowed the van to drive herself, but she wanted me to take her, and I didn't mind.

A couple of days ago when Joyce said she was going to pick Kathryn up from work (Kathryn is 19, and her car battery was dead), a guy on FamilyRUNning indicated that he thought that was proof that unschooling wasn't fostering maturity in young people (or some strongly vague complaint) because Joyce had "put her life on hold" to go and get Kathryn.

Ever since I read that, every time I've done something for Keith or Marty or Holly I've thought about how much this is NOT "my life on hold." This is my life in full, happy progress.

I'm going to pick Holly up in an hour, and I'm taking socks from her room, so she can try on shoes. She needs some warmer shoes for some time in Canada, starting next month. I could pressure and shame her and tell her to get her own shoes, and to drive her own self around, and if she can't remember to take socks she doesn't deserve shoes. But when I hear the people around me doing and saying and being that way, I cringe and I remember hearing things like that when I was little, said to me, said to other people, a steady stream of negative piss-and-moan, muttered and spoken and shouted. Not one bit of that ever did anyone's life any better.

Holly will be warmer and safer and happier with better, warmer shoes. It will be a benefit to her, to the family that's hosting her, to me, to anyone she walks around with or deals with, if she's happier and warmer.

Thanks so much for posting this, Sandra. I have also received the criticism in the past of being "on call" for my kids, and have always felt that it was just a part of my job as their mom. (Their dad does things and gets them places as well.) Who else is going to be on call for them, if not us?

I was on an outing one March at Navy Pier in Chicago with a couple of other unschooling families, and I noticed one of the boys didn't have a jacket or coat with him. Apparently, the mom thought it was his responsibility to remember it, it was his choice not to bring it, and if he was cold, then maybe he'd make a different choice next time. He was 11 at the time, and I was appalled.

I'm always so glad to hear of other moms who don't think unschooling means believing that letting children make BAD choices instills knowledge any differently than making good choices for them when you as a parent know better, and are in a position to help. (And by *parent*, I really mean the person with more experience in a particular situation.) That "maybe he'll learn his lesson" mentality is just another form of forced learning, since it's YOUR lesson you want him to learn (and a very negative lesson at that).

I wonder how often the guy who made that comment to Joyce expects his kids to stop what they're doing to accommodate a request from him "right now" (a request that they would perhaps deem not as important to them as whatever they were doing).

Helping people we love, doing things for them, all without complaint, now THAT fosters a kind of maturity that more kids should experience.

Thanks for the reminder, Sandra.

I love this, thank you. The small moments are becoming a challenge lately with my nearly-8-year-old daughter and I have to keep much more mindful of my behaviour. It's proving difficult, so reminders like this help.