I liked this. I found it for the Lyrics Game, in which today's word is "now." This is the first Martin Luther King, Jr. Day with a non-white president. Life moves right along!

I haven't posted lately and don't really have time to post today. My to-do list is jittery and increasing. I'm working on several things at once, and people ask me to do more, and they're interesting things I do want to do, so I say yes.

We had lots of company lately, and I'm still tired from a week and a half of fun, Fun, FUN! Photos will follow later. The only one I have uploaded yet (of dozens) is this: 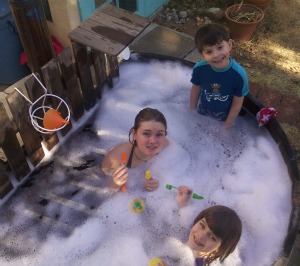 That's Holly, Adam and Clare, having a bubblebath in the hot tub.

Keith is going to have shoulder-replacement surgery on February 1 and will be in the hospital a day or two. Then I'll take care of him at home until I leave for New York, Pennsylvania, New Jersey and Connecticut. The main purpose of that trip is that I'm speaking at Lori Odhner's Caring for Marriage Conference, and other notes are here: aboutunschooling.blogspot.com

In March, Holly and I will be in Chicago for the InHome conference. [The UZOMA conference also scheduled for March might be postponed, so I'm not putting details today.]

I'm working on finalizing two months in the UK this summer, which are still vague as to dates, but I'll be there from mid-May to mid-July, and there will be three main events. I'm speaking in Edinburgh around the 20th of May or the next week (or both). There will be a conference in London June 25-26 (or 18-19, dates to be determined pretty soon) and after the London conference (if plans hold) camping in France, in the property of the place Helene McNeill's family has leased in Baud, in Brittany. Former owners had thirty tents there for a camping event once. I'm thinking we might have five or six. :-)

There are other things happening in fall. San Diego in September. Palo Alto in October (a one-day seminar). Other things being discussed.
Posted by Sandra Dodd at 11:01 AM