Pre-note: I know someone is tweeting all these posts as "unschooling," but better blogs of mine to follow for unschooling inspiration are: Thinking Sticks—Playing with Ideas and Just Add Light and Stir

This blog is about me and y own thoughts and doings. Sometimes unschooling and my life intersect, but this blog isn't all about unschooling.

There are beautiful words found in various places, and I thought I would collect some here. This will be added to later, perhaps.

In Chichester Cathedral there is a corner for Naval-related memorials. One of them touched me especially. I hope I transcribe it correctly:


Sacred to the memory of Lieut. GEORGE PIGOT ALMS, of the Royal Navy, who was killed onboard the SUPERBE, in an action with the FRENCH Fleet in the EAST INDIES on the 13th of April, 1782, in the 16th Year of his Age. He was the eldest son of Captain JAMES ALMS, who commanded the MONMOUTH, with the most exemplary Bravery, in the same Engagement.

He lived the Pride and Hope of his Parents, the Delight and Admiration of his Frends, the rising Ornament of his Country, and fell GLORIOUSLY in the Discharge of the Duties of his Profession honored and lamented by all who knew him.

Impressed with the bitterest Affliction and at a time that her Husband was still fighting his Country's Battles in INDIA, his fond and disconsolate Mother has caused this monument to be erected. 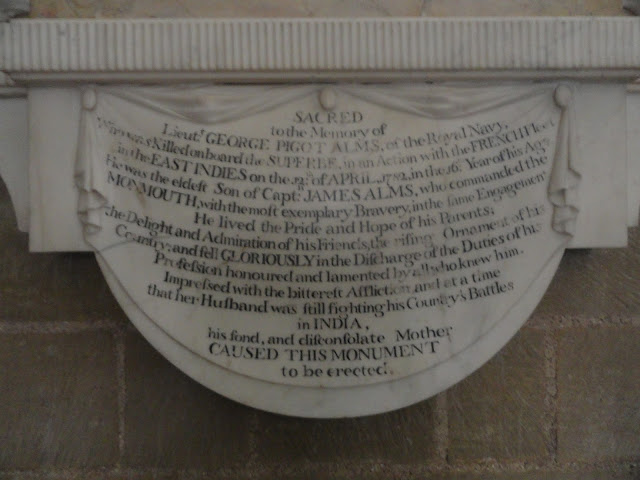 My photo of the full plaque was fuzzy, because that corner of the cathedral is very dark, but here you can see someone else's photo, showing the ships: http://www.flickr.com/photos/helensanders/6799997312/

The words to a modern Christmas song are also beautiful, and about a mother and son.

Did you know
That your baby boy
Has walked where angels trod
When you kiss your little baby,
You kiss the face of God
Oh Mary did you know


Full lyrics, commentary, and the video of a vocal performance are here: SandraDodd.com/christmas04