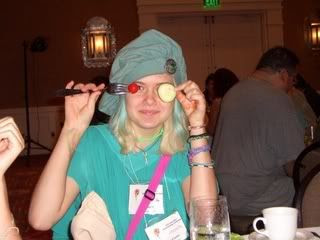 Still recovering from the conference. Deanne took this photo of Holly during the banquet. Today I'm well enough to do laundry and dishes, which is good! I'm glad I wasn't at all sick before or during the conference. I slept in a bed from which two other people had reportedly arisen sick. Ooooh... like a cursed bed. Because I was taking Joyce to the airport really early, I just stayed in the once-overflowing Sorooshian room with Joyce. I did bring a pillow from my own hotel room (which was full and overflowing with my kids and some extras) and I turned the sheet around so I would have germs on my feet (if there were germs) and not by my face. I slept wonderfully well. Woke up with a sore throat. CURSES!! But it was a simple thing to get up when I heard Joyce getting ready, drive to the airport, and then to my house. My van and I know the trail home.

It was fun to hang out with so many of the people who help other people get unschooling. I love these people online, and I'm thrilled at the magic they do with writing, and it was great to be in person with them. The older generation, people who were around "in the AOL days"
Deb/DACunefare (whose name we practiced saying behind her back, after she told us, COONifer)
Pam Sorooshian
Joyce Fetteroll
Sue Patterson

When the older voices wander off, it won't matter. There are many more! It was good for me to get to know some of them better, with voices and faces and sparkly eyes. I was happy and a little surprised, seeing them all in one place, to think of how many have been in my home, or my family in theirs.

There are lists and message boards I'm not on, so some of you might be thinking there should've been other names on that list, so I hope you got to hang out with people whose words have been helpful to you too!
Posted by Sandra Dodd at 1:46 PM

Awww shucks, Sandra! I'm honored to be included on your list. It's sorta like being a fan and having the superstar ask for MY autograph. ;-)

I am amazed that I can finally put a face to most of those names. There are only 2 that I don't remember seeing. The conference is really neat in that respect. Now I can read the words and picture the person too.