fear and faith, growth and potential 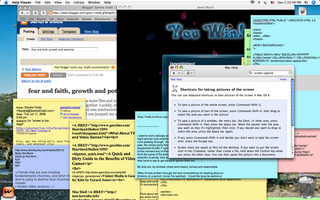 My computer desktop probably has more files and notes on it than that Kaypro II I used to own would've held altogether. Luckily, modern computers can find things as if my magic... but this find was mechanical. I was using "notepad," which has 20 or so open notes, and one jumped out at me (the corner of it, from under others).

I had mentioned this piece of writing just the other day to one of my kids. And then this weekend I was corresponding with a friend about Holly. He wrote, " I can't tell you how impressed I am with your confidence in your daughter and her decisions, and I really hope I'll have the same relationship with my kids someday. You're absolutely right about Holly, she's very mature and emotionally aware, and when she's older, whatever she decides will undoubtedly be the right choice."

It reminded me of this writing, but I didn't know I would find it, within hours! I love when that happens.

I used to worry strongly about what would happen if I died, when my kids were
eight and ten and unschooled. I was very fearful of leaving them in the
lurch partway through the project. But as each has turned 14, give or take a
year, the whole worry flowed out of me regarding that child. Each of them
blossomed HUGELY right after the rough early puberty, and I think that right
at this moment any of them would make it fine without parents. I wouldn't
think the same of the schooled teens I know around me, who are suspicious and
resentful of adults, who avoid eye contact and have learned to just say what
they have to say to get adults to ignore them too.

My kids are, by contrast, direct and cheery, honest and responsible.

Often I'll look at them through the lens of something I'm reading about or
thinking, or a period movie I've watched. Could the boys be sailors or
soldiers if they were in another place and time? Easily. They would be among
the best, if they had good reason to go and do those things. Either of them,
right now, would make good parents. Holly's still a little young, at 13, but
there are times in which she'd've been in the early stages of arranged
marriages, and could she do that? Yes. She's physically young, but she's
emotionally and mentally more aware of social issues and human factors than many
adults, and she's not thinking maybe she understands it, she knows she has some
clear understandings.

That feeling of fakery and fraud that people have talked about for the past
few decades seems absent in these kids. What they don't know doesn't scare
them, and what they do know is solid.

http://web.archive.org/web/20030801141134/unschooling.com/discus/messages/board-topics.html (Maybe you can't get there without joining the list, but I just have it here as a citation, to show when and where it was written.)

Within a month, Kirby will have moved to Texas. I'm not afraid. I'll miss him, but I'm not afraid. This will be a snap, compared to the other things I know he could do if he had to, if he wanted to, if he needed to. It's smaller than other things he will do in the future when he has to, wants to or needs to. I'm glad to have known my kids. I'm glad I lived long enough for them to be launched or launch-ready, as it were. I would say "I'm proud of them," but it sounds too much like the thoughts of an owner or an artist/creator, and they were by-products of my happy relationship with Keith. We didn't "build" them. We don't own them. We got to watch them grow and blossom, and we were careful not to prevent their growth. We nurtured but we didn't design or create.

I'm proud of myself for not screwing them up any worse than I might inadvertently have done in small ways I'm sure I'll hear about as the years unfold.

My kids are 6, 8, and 11. I am glad to read that someone like you once had this type of thought also. It creeps up on me at times. I don't like to let myself live in fear, but there are moments when I simply find myself there. Thank you for sharing this.

My son just turned 9 and the thought creeps up on me every so often, but much less so with each year that passes. The longer we live this unschooling life, the older DS becomes, the more confident I become in knowing that he would be okay if DH and I both died and someone else was raising him.

Belated birthday wishes for Kirby, and belated day-of-becoming-a-mom wishes for you.

Sandra, I am so glad to have found your blog a few months ago. I haven't been on the lists for years but your blog (especially these last few posts) gives me the unschooling vitamin shot in the arm that I used to get from you on the list, without all the other chatter, and it is so much fun to have songs and moving (emotionally and due to digital video feed) pictures. thankyou.

I swear I remember reading a post like that by you at unschooling.com; maybe one when he turned 18? But most everything you write is nice so I suppose it could have been another post. It's nice to read stuff from unschooling parents with older kids. I can't believe when Cedar turned six years old this year.. I always wonder what it will be like later; but it makes me miss him now (if that makes sense).

Also, I hadn't thought of unschooling.com in a long while. I clicked on the link and saw Lyle's name and it made me miss those old boards. I need to get back over to the new ones.
great post.

-=-I swear I remember reading a post like that by you at unschooling.com; maybe one when he turned 18? But most everything you write is nice so I suppose it could have been another post.-=-

Jennifer, that's probably the one you remember. I had posted it somewhere and then saved it on a sticky note.

Thanks for the kind words, all, and thanks for being sweet with your kids. I know it can be hard, with others saying you're wrong.

-=- I clicked on the link and saw Lyle's name and it made me miss those old boards.-=-

I meant to say that I have a collection of the best of Lyle Perry (or some Lyle Perry, anyway) here:
http://sandradodd.com/lyleperry