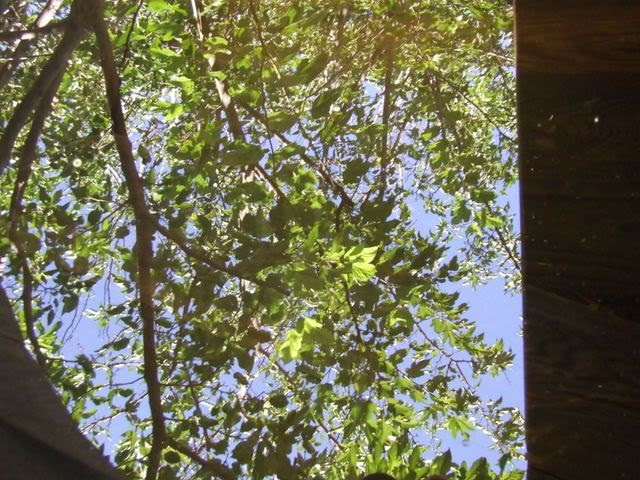 "Easily amused," Holly has said of me. I told that, in a talk, at the HSC conference in Sacramento last month. Someone later said "You are easily amused."

In our culture, "easily amused" is an insult. We should be cynical, sophisticated, and demand only the finest amusement. But what happens when one consciously looks for the good in things? Finding patterns, colors, sounds, interesting textures, wordplay, the feel on your skin of a change in the weather, a new combination of clothes you've had for years...

The photo above was taken because I found something unexpected and wanted to share it. Look here if you want to consider the mystery of what it is: sandradodd.com/mystery/tree. (Yeah, well you knew it was a tree, right? But there's more.) There's another mystery photo linked at the bottom there that will be new to some of you.

Here are some photos I took at the zoo the other night. The two in the blog post below, of the moon and the horizon, were also taken at the Rio Grande Zoo. It was the night of the Honeywell company picnic.

They'll probably end up as border backgrounds on webpages. Feel free to lift and use them too, or to link from my photobucket. You can click to get them full sized, or lift the thumbnails from here.

These patterns and textures not only "easily amused me," I was struck by the many beautiful things that go unnoticed when they are so near to more wondrous things—exotic birds, bronze sculptures, architecture, interesting people with babies and toddlers... but there in the most mundane of places were other bits of beauty.

The first time I went to England, in the late 1970's, I had similar thoughts, and I photographed the hardware on little doors that led to maintenance corridors or storage rooms in the backs of larger, beautiful buildings. Those things were just as old, or older, than the details of the famous fronts. Photos of the famous places could be bought, or seen in books. I photographed things that were never going to be in those books.

As this kind of seeing became a stronger habit with me, I saw little things my husband did, and later that my children did, that could be lost in the flow of such a big busy life, but I had learned to appreciate odd little things that might have gone undiscovered.

I learned to be easily amused. 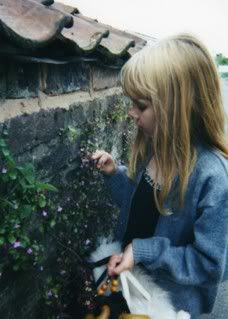 On my second trip to England, Holly and I took the train and got off in a small, inland East Yorkshire village whose name I don't remember. We went to the pub for lunch, but they weren't open yet. In the lane across from their side door, these flowers were growing on the outside wall of a little garage or storage shed. Holly touched them. What in all of England could have been more beautiful than that, at that moment?

Click to enlarge it, if you want to see the flowers better.
An article written at the time is here: sandradodd.com/eastyorkshire
Posted by Sandra Dodd at 10:57 AM

Sandra,
I love that you notice the little things in life, it seems like no one really takes time to notice those things anymore. I am always being told to hurry up in stores because I tend to notice all the little things: the difference in the colors of the fruit and veggies, the way different cuts of meat are arranged in a display, the textures of fabric on my fingers (how can I choose between a soft and a silky?), the way a splatter of sauce catches the light in a buffet, the new flowers that almost everybody ignores, the clouds that can never hold a shape long enough to catch it on film, the way my baby smells after eating a mango. Ah yes, the joys of the simple, mostly unnoticed things in life.
I have been reading (lurking on) your sites for over a month now. I finally had to comment on this topic because I, too, am "easily amused" by the simple things in life. Now I'm going to take this opportunity to thank you for all the information I have found through your blog. We (my family) enjoy attending Renaissance Faire and I found you when I started looking for baby costume ideas. I do make the costumes for my family and I don't mind making a new costume for each Faire, that's part of the fun for me. I also homeschool, although I don't think I qualify as an unschooler. I have found a lot of really good information on your site for our "school days" and keeping my sanity in tact.
So this is turning out longer than I intended, but I really do like and admire you, or at least what I know of you through your blog, and I just wanted to say as much, finally.
Sarah

My kids call me "easily amused" when I'm laughing my butt off about some simply yet funny thing. I can live with that.

Easily amused sure makes us easy to entertain eh? If "god is in the details" then I am truly divine for the noticing of it.;)