Apologies to those who read these by e-mail! I launched this while formatting, and there were no words.

So I was thinking...

My kids are all in other states this week, and I went to their MySpace pages to gaze upon them (and to see if they'd left any news, which they had not), and thought I'd share what they have up as their main photos today. My camera is in North Carolina, so I can't take any up-to-the-moment blog photos anyway. 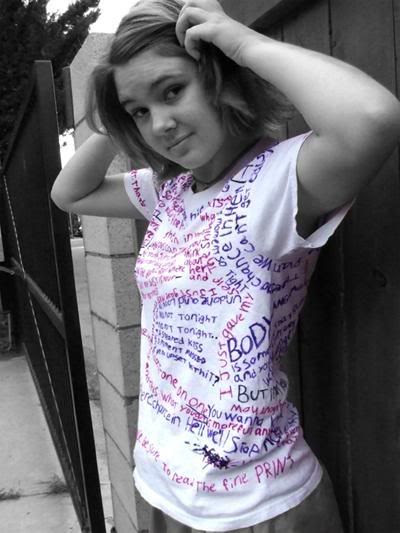 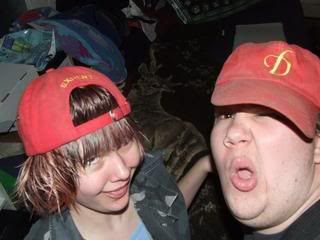 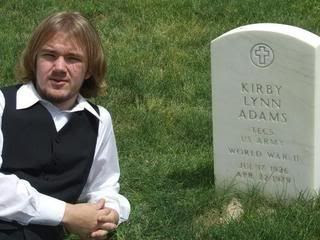 The warning isn't about my kids at all. My thought about a warning was that people sometimes post damning things about themselves and their families, or they badmouth other people (sometimes me) on blogs or on MySpace, and then they seem to think they're invisible, or it was in magical "time out," or didn't count, or wasn't real or something.

In just the past month there have been a few incidents involving someone telling me my family's not all that, and theirs is just as happy or peaceful or together. First off, the statements of others don't change my children's contentment. And more importantly, if someone has chosen to post in public that they're not getting along, things aren't going well, that they question their whole set-up, or if surveys are filled out (repeatedly) saying the last time a person cried was today, or yesterday (child or parent, either or both), then that's a public indication that there could be more peace at home.

What is posted in public is posted in public. I've never heard of anyone having been court ordered to post anything on the internet. I think it's still, at this point, all entirely voluntary. I'm fascinated by people's twistings and turnings, but I'm not entirely sympathetic, and I don't appreciate being anyone's bad guy or target. The arrows don't reach that far; they fall right at your feet, in your own house, or on your own page. You're publically shown to have aimed, and yet I'm not hit.

Meanwhile, my kids are having a good life, and I'm still answering questions about how we managed to help them do that. Keith and I have spent most recent evenings working jigsaw puzzles and sitting in the hot tub (not at the same time), while the kids are gone. TUESDAY! I'll see Marty and Holly again on Tuesday.
Posted by Sandra Dodd at 10:10 AM

I have so many friends who, espeically this time of year, can't "WAIT" for their kids to go back to school. Me...I'm glad my son is home with us! He's fun & loving & seeing the world through his eyes is priceless. It's such a blessing to read your Blog, and see a Mom who enjoys being with her kids, looks forward to them coming back home and BEING home, and who isn't full of BS to make others happy. Kudos to you...

I thought of you yesterday, Sandra, knowing that as much as I'm missing Dan (he's at the L&L, too) I still have Andy at home. After 22 yrs as a Mom, I can't imagine what I'd do with myself if I had no kids in my house for a week....

And yeah, the internet does tend to bring out the nutcases, much like an episode of the Maury show!

Maybe they were watching a sad movie.

I can only imagine what prompted your musings on this post, and it makes me sad that there's always someone out there eager to criticize. My children are 10, 6 and 4, and when we started researching homeschooling and homeschooling philosopies (back before the youngest two were even born), the name that kept popping up was yours. I didn't even realize you were still homeschooling ;). So, bravo to you! Regardless of whatever criticisms you've been facing, you and your family are THE pioneers in the "unschooling" movement - whether you know it or not, and as a fledgling unschooler, I wish to thank you for blazing that trail for us. It certainly has made our journey easier ;).

Thanks for the kind words, Wendy. There were other families before ours, definitely, but what I did was to document it as it went along, from the time Kirby was eight or nine (and before that, but not so publicly then). I'm glad my kids were all willing to have their lives shared. It does seem to have benefitted some other families, for sure.

I was at the L&L conference and got to interact a bit with Holly and Marty and they seemed even more at home in their skins than they were when I saw them two years ago in St. Louis. The teenagers in general such an inspiration and source of wisdom at the conferences.

Just a quick comment as I am amidst unpacking and picking up pets and other things to get back to normal life :) We've also just returned from the conference.

Marty and Holly continue to be inspirations to me :)

I'll post pics to my blog later today. I believe I got some fun ones from the talent show too. They did a really fun act together.

We got to see Holly and Marty at L&L and once again, I am struck by how wonderful people they both are! Holly spent a lot of time with us on Tuesday night, much to the girls pleasure, and Marty was so sweet when telling me the story of how he missed my talk. And if Marty has told you I encouraged anything to do with canoes and the lake...uum, no comment!

Thanks for the Marty and Holly news and feedback. They finally got home and have slept a long sleep in their own beds. They're off at a movie now with friends. They're gone again, but they've in our car and not so far away.

I've been "blurking" on your blog a bit but felt compelled to post.

I agree completely about the nasty side that some bloggers unleash via the web. It's as if they feel that they can be cruel or intimidating because they cannot be seen.

I choose to write as I live my life--as honestly as possible. I would never attack someone thoughtlessly... in fact, I would probably not attack anyone at all.

Just keep living your life (which I know you'll do) and loving your children (which I also know you'll do.) Whether someone supports the notion of unschooling, homeschooling, or any form of alternative schooling can never take away the pleasure you feel in sharing moments with your beautiful sons and daughter.