The view, with mist, out the window where I'm staying. The big building in the foreground is a school that's being converted into apartments 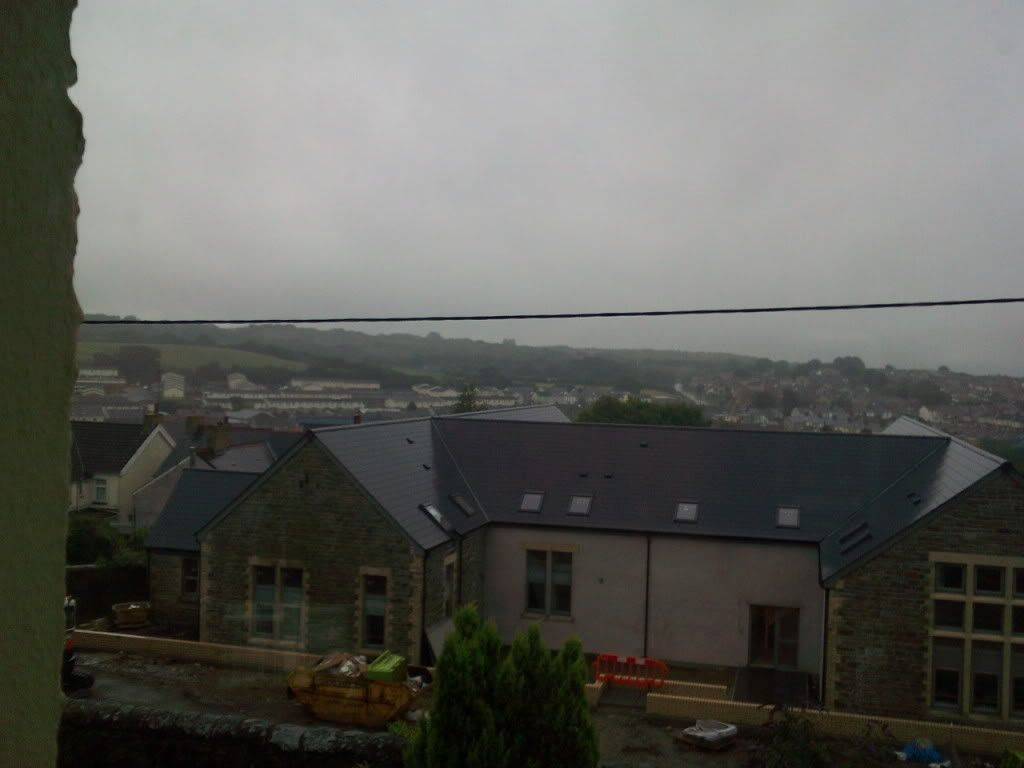 Some oddments and details from Llanharan Saturday morning before we took the train to Cardiff. Click to enlarge that gate if you want—I liked the ironwork. It led into someone's back garden. The second image below was right along the road, behind a house, and over the door at the left it says "Laurels." Through the window I could see all kinds of thing I would have loved to be able to look through and ask about. The building was straight, not rounded; my camera's panorama feature distorted it. (It can also be clicked for enlargement.)


A Mardi Gras Parade in Cardiff looks like... It seems that they were having a Mardis Gras parade. In a thrift store where we'd been a while before, the employees were wearing cowboy hats and they were playing country music. That was part of the day's celebration. It was a Saturday in August, and perhaps I misunderstood the Mardis Gras part a little, but I did bring images for you all to see, especially Frank Maier. Much about dragons. Some about New Orleans. One Dixieland band, and other things, mostly drums (including a big steel drum band). Some of these are noisy, so don't open them in a quiet house where people are sleeping.

The dragon with people holding the wings and tail up, if you see that, the guy was juggling trash—empty bottles and stuff from the gutter or somewhere. He juggled before and after I was trying to capture the pictures. It wasn't because of me; just coincidence.

We went into "The Parish Church of St. John the Baptist," and there were too many beautiful things to see for me to take enough photos. The vertical one is the back, entry and choir loft. The horizontal is the altar. The altar in the slide show is in a side chapel.

I mentioned in the Bishops Stortford post on Thursday that they have churches across from pubs. Joy and I ate in a pub and this has the view from the upper level, where we ate. One is looking down over a railing. The other is out the nearest window. I didn't want to put the flash on in a dark room. One photo is Joy sitting at our table. One is my food: chicken and ham pie, mashed potatoes, peas and gravy. And there's one of the ladies' room vending machines. One had condoms; nothing notable. The other was breath mints and inebriation tests. If they have those in the U.S. I haven't seen them.

The parade was for the MAS Carnival in Cardiff. I don't quite know what the MAS festival is, but you managed to stumble upon its 20th anniversary celebration which was blended with a celebration of the 50 years of the officially recognized Welsh Dragon festooned flag. Yay internet!

That church looks like the one in the wedding scene of The Sound of Music.

I've been enjoying the glimpses of England you are sharing with us!

Fascinating! Thanks for thinking of *me* when you saw a big street party mardi-gras-type festival! *grin*

Looks to me more like a Junkanoo or Mako Jumby celebration from the Caribbean or Carnival from Brasil. Maybe the lovely Mrs. Polikowski could chime in on that. The music on your recordings was definitely more island than New Orleans, although you did mention a Dixieland band.

Anyway, that was interesting. Thanks.

See ya in about a month.