Keith's motorcycle is in the shop for brake callipers or something. So yesterday I told him to take the car to work, because I've run out of copies of the Big Book of Unschooling (more are on the way), and I didn't need to go to the post office today.

After I was up I looked at my physical therapy schedule and my appointments not until 8:00. Keith and I joked about it by e-mail.

I went out to feed the birds, as I do each morning, and saw in the driveway nothing but Marty's jeep. Huh. Keith took the car, and I need to go to the rehab gym.

So here's the gratitude part: I'm not frustrated about it, nor angry, nor embarrassed. I called Keith and he said "I didn't think about that," and I said "neither did I." Keith told me where the extra key to Marty's jeep is. I said if I couldn't find it I'd find Marty's key. Marty's asleep and usually wakes up at 10:30 or 11:00. I know calmly and for sure that if I use Marty's jeep to go to this appointment, he won't be frustrated or angry. He'll be calmly fine about it. I'll leave a note, and I'll be back at 9:20 or so. He'll still be asleep.

I can remember situations I witnessed or was part of, many years ago, in which this could have been a recipe for accusations and whimpering and cussing, but it's just not.

Calm builds calm. If someone had told me that when I was 25, I would have had no idea what it was about. I was years from "calm." 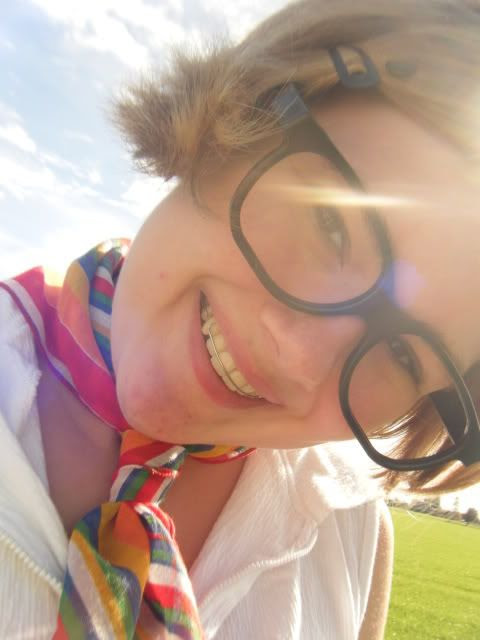 Holly comes home today. She'll be here for two and a half weeks. and then to England. I lifted the photo from her stuff elsewhere.

The note I left for Marty, in two places:

Keith has the car because the bike's in the shop. We forgot about it when he took the car to work. Sorry.

The reason he was awake is that flowers were delivered, for Holly. From Julie, James and Adam, the family she'll be with in England. And Marty was wondering why his jeep needed rehab. So I clarified and he said I should've said "physical therapy," and he went back to bed, but all very nicely. So when you leave a note for a younger person, don't say "rehab" if you can say "physical therapy."
Posted by Sandra Dodd at 7:04 AM

So happy for you that Holly will be home today. I can just imagine the wonderful homecoming...Hugs to all of you!