Where have I been this week?

Locals are asking me where I've been and I forget, and I'm confused, so I'm going to make a list. Also, I'll need to identify carousel photos and this might help.
Sunday, to Roya's sale in Jennifer's yard in Bixby Knolls (Long Beach), and Cypress College to a flea market and to see Rent.

Monday, Northridge (to Rose's apartment, and to eat at Joyce's Cafe), then Encino (outdoor merry-go-round) and then a mall with a two-decker carousel outside a Target (Westfield Topanga Mall). Canoga Park, outside the mall, they were setting up an ice skating rink, outside. Then Santa Monica pier, where the merry-go-round was closed in its building, but we could see it through windows. ("A few miles north, the original Santa Monica Pier features a newer amusement park, similarly called Pacific Park. Today, the rides and attractions of the Santa Monica Pier include the Carousel that is featured in the 1973 Academy Award -winning film, The Sting." *)

Tuesday, Shoreline Village, in Long Beach: The carousel had arcade games up against it. We went and took photos of the ferris wheel and roller coaster.

Wednesday, Two malls next to each other. South Coast Plaza in Costa Mesa had a big carousel, but all horses. Nice chariot. And a smaller section of the mall, across a road, had a small, English King Arthur carousel.

Thursday, Mary's Cafe in Sierra Madre, then Monrovia, Covina, Pasadena to the museum, Citrus College to see Fiddler on the Roof.

And, unexpectedly, Sunday night - wandering in the dark in a little orange grove in Northridge. 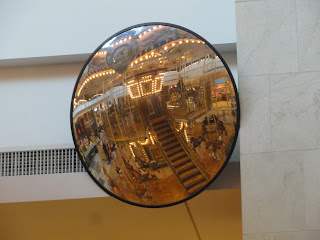 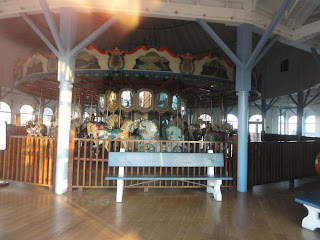 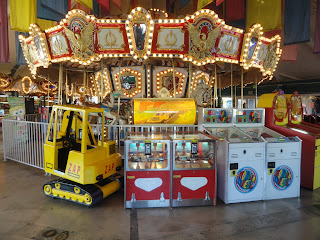 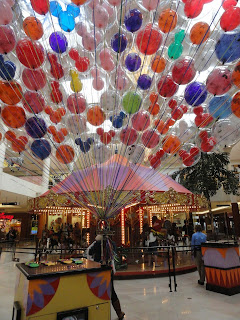 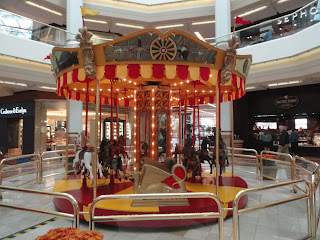 And, unexpectedly, Sunday night - wandering in the dark in a little orange grove in Northridge.

I'm grateful for that orange-grove stop. That was the first time I ever at an orange that was just on a tree.