The unschooling world is all a-flutter about a crazy little piece on Good Morning America Monday morning. The family looked great. The reporter and anchorman looked like doofus and doofette. But you don't have to take my word for it:

Unschooling and Unjournalism, by Peter J. Orvetti, at The Moderate Voice. Some people called it a trainwreck. Peter Orvetti calls it a hatchet-job.

Lunatics and know-nothings came out of the woodwork this week bigtime. Unschoolers who are easy to find have had phone calls and e-mails galore. Facebook comments are high quality and hoppin'. Blogs are gathering gems. 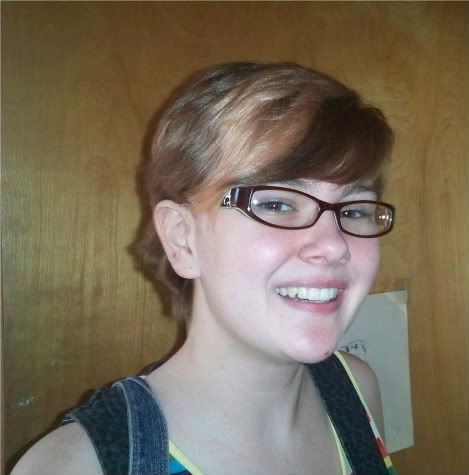 Meanwhile some crazed stalker named "anonymous" put a lame little-kid attack on my sweet and wonderful daughter, on an old post:

I'll quote the problem child, then my first response, and then what Holly wrote. She doesn't want it deleted. You can read the other comments at the link above. Skim down to the current dates. Comments are welcome! Even stupid, hostile ones. They're amusing. Taunts cannot change the fact that my kids are well and happy. 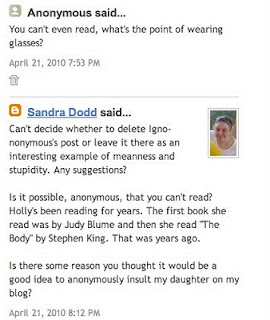 Today I got an e-mail from someone who was busy and missed the roiling ruckus. I have permission to quote it. I even sent it to one of the journalists, who was very interested. It's longer, but here's the sweetest bit:

I have finished the book. I have been consumed by nothing but thoughts of unschooling for 6 days and already I feel that it has made a difference in my life as a mother, wife, daughter, friend...I feel in some ways that this burden is lifted that I put on myself before. Pressure to do right or be right—looking at some activities as more valuable than others rather than just enjoying the moments, whatever the activity.

Ah. Full circle. While I was writing this blog post, I got an e-mail. It also included praise for the book, but then there was this about Holly:

One thing I wanted to mention was that the words that have had the biggest impact on my unschooling life came from your daughter Holly. You told a story about how when she was young you were both in a public restroom, and she was waiting on you when she observed a Mom berating her young child. Holly said something like—"You should be nicer to him". I read that story a long time ago, and it hit me right in the heart. I realized that I should focus more on my attitude toward my children, and less on what others thought. Holly's words have caused me time and again to focus on myself and my attitude and behavior toward my children. Whenever we encounter an "issue", it usually has to do more with my own scars from childhood—whether from my home life or school—and not with what my kids are doing. Once I learned to look at them as special and unique individuals and to let go of all the nonsense that has been poured into my head over the years, I was able to be much calmer and handle the situation better.

Your daughter is such a wonderful example of what a wonderful person a child can become when they aren't hindered by the baggage that comes from years of institutionalized "education", shaming, guilt, and oppression. Her simple advice of "you should be nicer" just sums everything up for me. I find myself hard pressed to think of a situation in life where that perspective doesn't apply.

Thank you for all the help you have provided over the years for my family, and thanks especially to Holly!

I can hear the "yeah but" now. We had one this week on Always Learning. Those who spew "yeah, but you..." all the time instead of thinking and letting thinks soak in might say that Holly wasn't being very nice by criticizing that mom. Holly was taking the side of the child, and of right, and of peace on earth. The mom wasn't just berating him. She was holding him roughly and asking him in that threatening way whether he wanted a spanking. I've been asked that question. There is no right answer; you're probably getting a spanking. That's when Holly spoke up. I don't care how well or how early a person can read, or whether he can read at all, the courage to stop violence, in a young child especially, is exceptional. Most adults would've just looked the other way.

Many adults, as this week has shown, don't even have the courage to put their names on a blog post.
Posted by Sandra Dodd at 11:17 AM

i love this a lot how you said "Taunts can not change the fact that my kids are well and happy."
Isn't that what it comes down to?

It certainly has been a firestorm this week. I think that it has been a good opportunity. For those of us who haven't said much publicly for a while to get out there and raise a little ruckus, and for a lot of unschoolers to post here, there and everywhere, with cool heads and good points.

Holly! I think your glasses are totally cool on you.

You're as cool as your mom

I agree about the anonymous comments...or in my case (on Wordpress) the comments with a name and a fake email address and only once has a criticism included a link to their own blog.

Those goofy "Your blog is fascinating, click my link" things have never insulted my child, so I just delete them without emotion.

I hope all this media attention sells you a lot of books. It doesn't irk me at all (unschooling media frenzy). I put a video of mine on private that was getting some rude comments. I may put it back on public and just ignore all the rude comments. Haven't decided. Thanks for the thoughts.

I felt a roller coaster of emotions reading this. There are the issues of how I was parented. There are the issues of the areas that I am too afraid to let go of control of with my children. When I think of so drastically changing parenting, I think of my early gray hairs. Yet, a part of me thinks it sounds beautiful! We have started unschooling recently. However, we maintain rules. We maintain chores, bedtimes, food habits. I have children that have trauma issues...I can't imagine PTSD and rages in the middle of absolute freedom. I have children who choose to leave without telling parents...how would you deal I wonder...your blog has inspired me, made me question myself, made me think...

But no one would expect you to do anything that made you or your kids feel less secure and safe. That wouldn't be helpful, and as the first link above says, it's hard to go back if you go too far.

I'm trying to get my head around the assertion that because someone does not attend a traditional school, that individual must not know how to read. Aside from being rude, it's just illogical -- and betrays a complete lack of knowledge of world history.

well all this talk has inspired me to put my initial thoughts about unschooling/natural learning in my blog. I'd love for you to check it out and give any feedback if you feel so inspired....

i love what youre doing. its your family. you have a right to do what you think is best. i wish my kids would have let me homeschool them. i'm also a certifited teacher. some schools are just not for every child's needs. i'm putting you on my blogroll.

"Anonymous" has been busy this week!

What an immature comment that person made. It's so "mean girls", and wrong to boot.

so lovely! thanks for sharing that!

WTG Holly, for standing up for another who couldn't stand up for themselves. :D