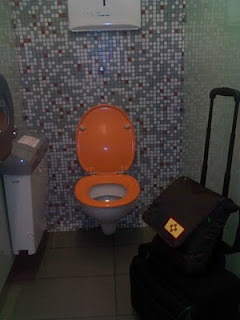 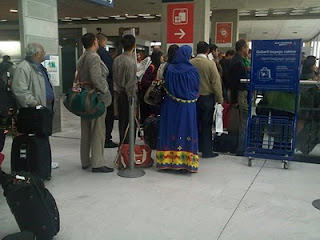 More pictures there after I sleep and visit and the sun comes up.
Posted by Sandra Dodd at 10/22/2010

Very stylish bathroom! Much prettier than your typical public restroom in the States.

That clothing is beautiful. I wonder if the mirrors are done with shisha embroidery?

Notes saved for myself. :-) From a chat, about Paris airport.

Sandra Dodd: The terminal/gate, was a little waiting room, and a bus drove us around the very large airport to the C gates. C-88
Sandra Dodd: The further I went, the more Indians, so that seemed an indicator that I was going the right way
JennyC: I love large international airports!
Sandra Dodd: The skyways are glass, and beautiful, in Paris