Albuquerque to Phoenix works like this:
Get in plane; leave at 6:15.
Sleep.
Get out at 6:15, in another larger city the wrong direction.

The next flight was set for 7:00 and by the time I walked straight to the other gate, didn't stop for the bathroom or anything, they were boarding.

They wanted to check my bag to my final destination. London tomorrow!? No way. It's my computer, my extra clothes, my notes. So I had it with me, because I was in group 2. Had I been in group 4 or more it would've been check it only.

Got to my window seat, and there was a mom and a young (4 or 5) middle-seated boy. I asked if he'd like the window. His mom said he would LOVE to have a window.

I'm trying to put my too-valuable little rolly computer bag up above and I think I'll move this pillow. The pillow feels funny and it's way too big. "Oh, that's my wedding dress," says this mom. She didn't actually have a seat in that row, but she did have an aisle seat and was waiting for the person with that aisle seat by her son to come and trade. "We were all scattered," she said. Oh! Her fiancé was also there.

"A woman with a wedding dress ought to be travelling with a guy," I said, and others around there were being supportive with smiles and comments. So I offer to trade, but they looked sad and said it was a middle seat. I said fine. My case is up behind where I would've sat and way behind my new seat, but her guy said he would take care of it, and he did. During the brief (and simple, to me) negotiations, when she was expressing embarrassment about it being an undesirable middle seat, and offering to pay for any drinks or food I wanted in the plane, I said no, that I got married once, and it was a long time ago, and she should make hers good. "We've been together thirty years," I said; "You should do that!"

Someone in the row behind her said "no pressure." By then lots of people were aware of what was going on, and they were being really patient and accommodating.

She communicated back to her husband-about-to-be that the condition of the trade was that they stay together at least 30 years. He seemed fine with that deal.

Lots of people think they'll stay together a long time, at first. These folks will have a little extra incentive. I think the words of the ceremony are ignored because they've been heard so long, and there's so much divorce around. These were new and different words.

At the end of the flight, she was helping her little boy out and started walking away without her dress. Future-Mr.-Her called her back. He couldn't get it because he was carrying my bag. People commented sweetly, laughed politely, said "Can't forget that!"

When I left, the lead flight attendant said softly that it was really nice of me to have changed seats. I thanked her. I'd like to think anyone would have done that.

Keith and I have been together 35 years, and married for 29. I averaged it out, for poetic deal-making purposes.

The B and A gates I've hiked through this afternoon in Philadelphia had displays. One was the history fo beer manufacture (just artifacts—trays and bottles, in glass cases by historical periods), one was art, one was parts of costumes worn by The Supremes. 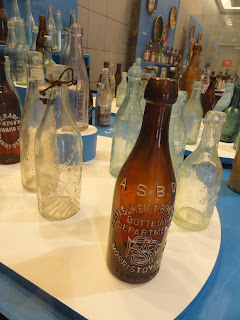 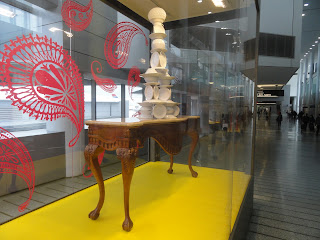 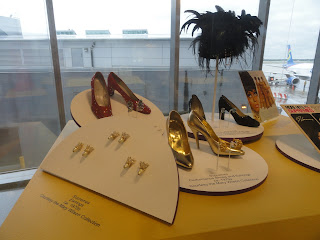